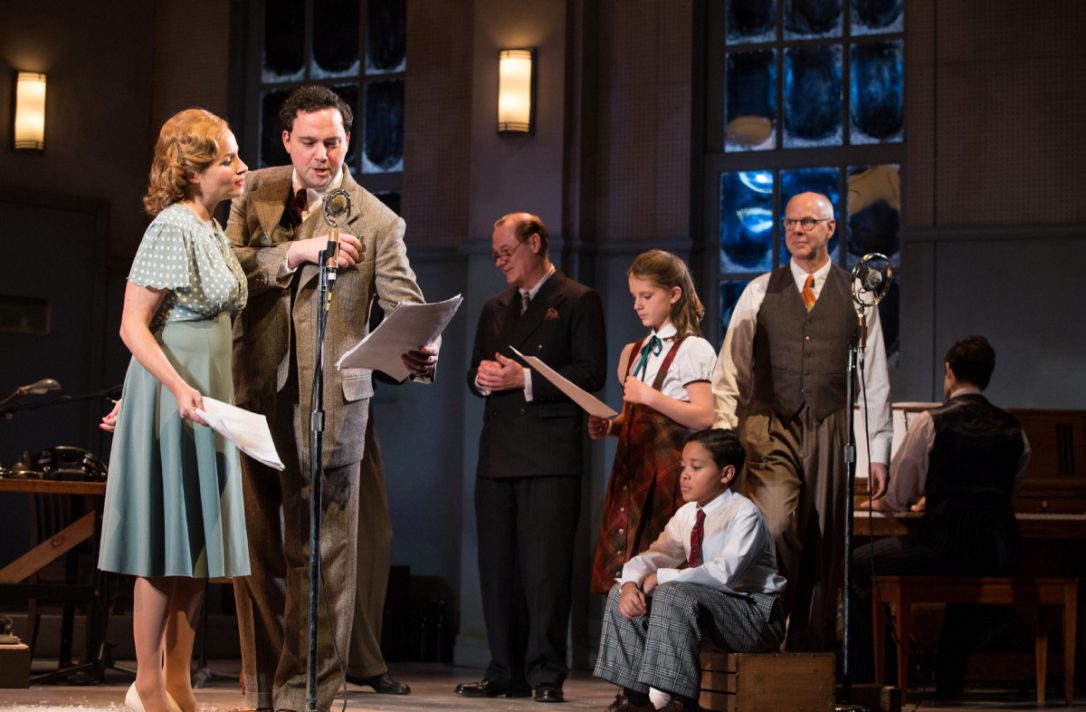 Toronto’s (Canada’s?) most ambitious professional theatre company is undoubtedly Soulpepper. The artist-led organization has never been shy about making their mark on the city but lately they’re expanding at a rate worth noting. This is especially noticeable at Christmas time, a season which used to consist of just two signature productions remounted in alternating years but is now positively overflowing with Soulpepper programming. Those two productions are still definitely around- Parfumerie is sitting out 2016 but A Christmas Carol has been upgraded to a yearly tradition- and the company has now added magician David Ben to their annual holiday lineup as well as their instant classic original kids show Alligator Pie and what promises to be a new go-to Christmas favourite in Philip Grecian’s radio play adaptation of It’s a Wonderful Life. Add to all that what director of music Mike Ross is cooking up with a concert presentation of his new musical Rose (with Sarah Wilson) and A Very Soulpepper Christmas cabaret and the Young Centre couldn’t possibly contain it all. So the company moved a little west, taking over the gigantic Bluma Appel Theatre at the St. Lawrence Centre for the Arts, a notoriously hard space to fill, the usual home of half-sold Canadian Stage productions. With two locations full of programming and an ever-expanding roster of yearly classics, Soulpepper is taking over Christmas and carving out a new set of theatrical traditions for the Torontonian family looking for something other than The Nutcracker

Read my review of Alligator Pie HERE (it’s been recast since I last saw it but recast with a crew of five absurdly delightful company favourites so I can safely still recommend it).

Read my review of A Christmas Carol HERE (also recast but Joseph Ziegler returns to his signature role as Scrooge so also still a safe bet).

Hocus Pocus
David Ben is a very capable magician, arguably the most refined in Canada when it comes to classic illusions like linking rings and disappearing coins, but his showmanship is nearly non-existent. He tells the same forced jokes time after time- whether they’re relevant to that particular audience on that particular day or not- and appears to be having less fun than anyone else who’s ever stepped on a Soulpepper stage. He’s not charming or funny or in any way interesting, but at least his tricks are well executed. If you’re really into the academic, practice-makes-perfect aspects of illusions, David Ben is your guy. Personally, I would not see this show more than once, at least not intentionally. Annoyingly, Ben (or Magicana or Soulpepper or whomever it is that makes these kinds of decisions) is marketing this as a new show, something that someone might attend as a follow-up to last year’s Tricks or, previously, The Conjuror, to see more of what Ben can do. But you will not see more of what Ben can do, you’ll see the exact same thing you saw before (again, even down to the charmless banter). His tied thumbs pass through the blade of a sword, a torn piece of paper is reassembled, an audience volunteer finds a chosen playing card in his jacket pocket- if you’ve seen any David Ben show, you’ve seen every David Ben show. I get that Ben has his signature pieces that he’s perfected and he likes to show those off, I even see how it might be possible that someone would want to see those things over and over again, but you can’t pretend it’s a different show and, by rebranding and retitling every time, that’s what’s happening. If I want to see Ben’s singularly impressive coin work, I’ll buy a ticket to see something I know I’ve already seen. But, if I get a ticket to another “new show” and see the basic chemistry exercise “Sands of the Nile” one more time, I might scream.

It’s a Wonderful Life
Now, let’s talk about some real magic: the live sound effects created by Dan Mousseau, Marcel Stewart, Christef Desir and the rest of the ensemble of It’s a Wonderful Life; the unbelievable detail of Lorenzo Savoini‘s 1940s radio station set with its grimy walls, kitschy Christmas decorations, snow-piled windows and on-stage tech booth that adds game-changing depth and visual interest to the production; the most perfectly cast ensemble of versatile players I’ve seen on stage in ages. I’m not sure I love the premise of Grecian’s adaptation that puts distance between the audience and the characters of Frank Capra’s classic movie by presenting it as a radio play but Soulpepper’s execution of the concept is exquisite and the story is about as insightful a programming decision anyone could make in 2016. The hateful, manipulative rhetoric used by Diego Matamoros’ biting take on “warped, frustrated old man” Mr. Potter rings out with terrifying honesty in our current climate, but so does the open-hearted optimism of Oliver Dennis‘ cooky angel Clarence Oddbody. Michelle Monteith is perfectly cast as the cooing Violet and sweetheart six-year-old Zuzu and Ellie Moon does a lot with a little as Building & Loan secretary Tilly. Thea Lapham and, especially, the incandescent Richie Lawrence are treats as young Mary and George respectively, though its their adult counterparts who make everything come together. Raquel Duffy and Gregory Prest are probably my favourite pairing in the Soulpepper stable, playing opposite each other regularly, consistently bringing easy chemistry and a rich shared history to the work. As everyman hero George Bailey, Prest delivers his finest performance in years, a strongly felt and beautifully layered interpretation that hews close to the indelible Jimmy Stewart original without mimicry or sacrosanctity. He deploys that unflinchingly affecting Prestian superpower of sincerity and relatability but brings a maturity and conflicted psychology to the role that discovers new depths in a character already immortalized into pop culture consciousness. It’s a moving, vulnerable, insightful performance that serves as the lynchpin of the company’s impressive work. The radio play, with its lack of physical action, is resulting in the occasional snoring audience member and it’s hard not to feel a little alienated by a framing device that casts Prest as the actor who plays George Bailey rather than as Bailey himself. It’s therefore tempting to imagine the sort of theatrical creativity that might have emerged from a far bolder attempt at actually staging the action like the company has done with other seemingly unstageable epics like Great Expectations. But said quibbles are with Grecian* (and perhaps a little with Albert Schultz), not with the company whose execution of the material is truly a sight to see, or certainly to hear.

*Additional quibble: where was “Merry Christmas, you wonderful old Building & Loan”?! It’s one of the most iconic lines in history and it’s confoundingly absent from the scene on stage.