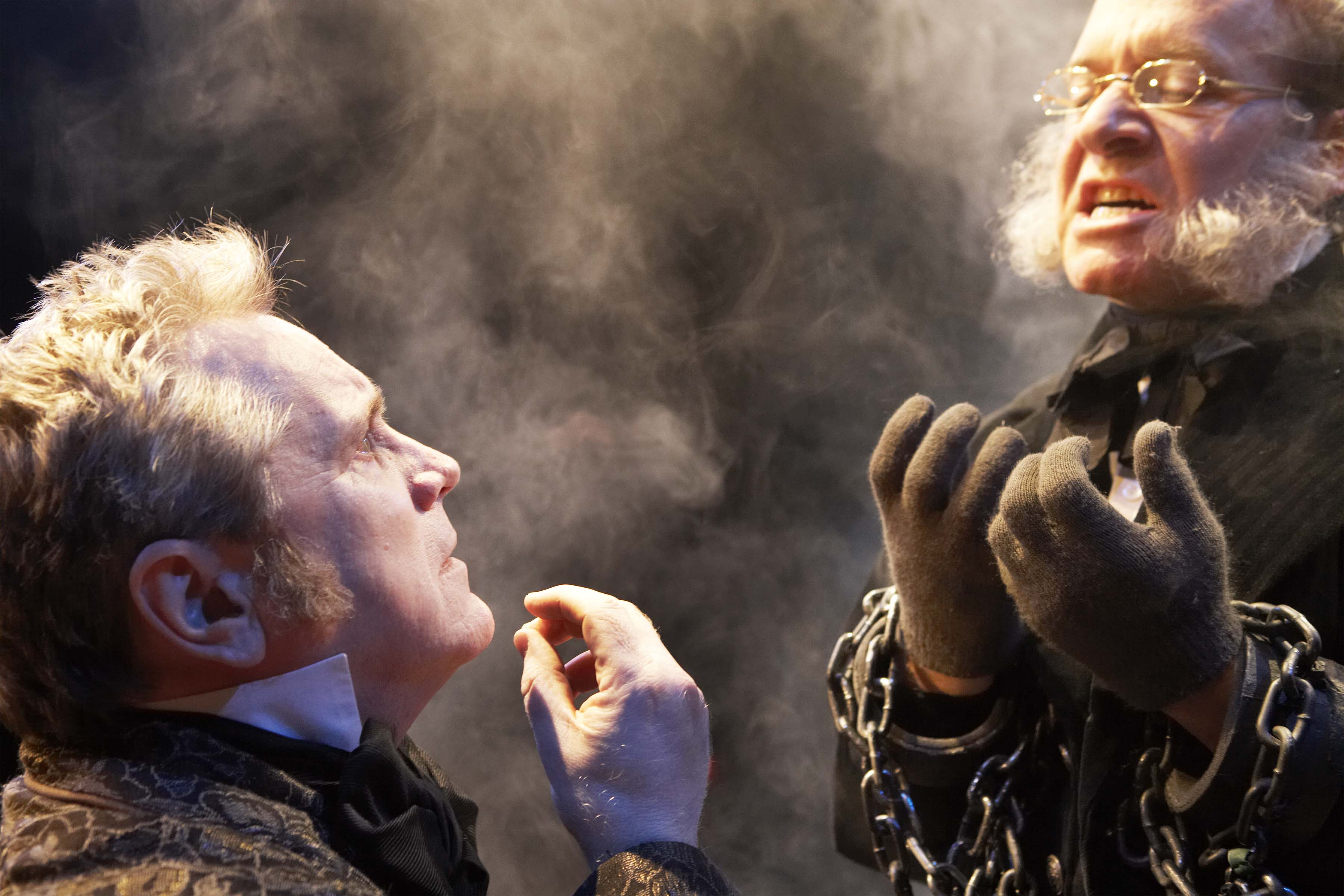 I generally go to Soulpepper openings alone but I was out of town when A Christmas Carol opened, so I had the pleasure of getting to bring my mother to an everyday evening performance of the biennial remount. I like to talk, in case you haven’t noticed, so I relish getting to explain things like how the Baillie Theatre in the Young Centre for the Performing Arts is a convertible space and A Christmas Carol was using it in a clever and effective configuration I hadn’t seen in that particularly theatre before (with audience on all sides). I like getting to chatter on about how Joe Ziegler’s heartbreakingly lonely and bitter performance as Scrooge couldn’t be further from his persona within a company that is both a literal and metaphorical family affair for the tried-and-true actor/director, and how he’s played more challenging leads in the past few months than anyone I’ve ever seen (Salesman, Endgame and Carol back-to-back-to-back!). I got to tell my mom all about how Soulpepper alternates their Christmas stories year-to-year, one with Oliver Dennis in the lead and Joe Ziegler supporting and this one the other way around (Dennis plays Bob Cratchit in a stroke of casting so good that it seems as though the role were written for him and his soft-spoken optimism). And, most fun of all, director/adaptor Michael Shamata’s fantastically written and wonderfully evocative frame device allowed me the opportunity to dive into theatrical suspicion and the history of the “ghost light” that sits on stage at the top of the show.

The whole thing is a gab-worthy delight full of easter eggs for everyone from Dickens nerds to Soulpepper fans to audience members seeing the recurring production for the second, fifth or ninth (!) time. It’s a show to be shared, and, specifically, seeing a Soulpepper production with someone who doesn’t take for granted the extraordinary standards of production they reach show after show after show is like seeing a Soulpepper production for the first time- it reminds you of just how magical what you’re seeing really is.

Lighting designer Alan Brodie, I think, is where a lot of the magic lies in this one. I mean, as always, the magic lies with the company and their dedication and love- for the work, for the theatre where they do that work and the people they do it with-  but on a logistical “how do we tell a ghost story without computer effects?” level, Alan Brodie is a bit of a mastermind. The ethereal way he projects a clock onto the stage and captures Ziegler’s Scrooge within its light- seriously?! Shamata’s adaptation is clever and insightful while keeping Dickens’ glacial pacing at bay, and his crop of actors is stellar- from mainstays like Ziegler, Dennis and the always delightful Kevin Bundy to younger actors like Matthew Edison (as Scrooge’s nephew Fred and young Ebenezer among others) who gets more interesting with every role I see him in. Across the board, A Christmas Carol shows off the inter-departmental bench depth of Canada’s best company and does so in a way that puts story and message first, astounding visual effects and showy technique last.

That’s all I have to say, really, about A Christmas Carol. It’s a great Soulpepper production, and that’s the highest compliment I can make about Canadian theatre. It’s a great piece, worth seeing with someone you love and seeing again and again. Particularly in mid-December amidst the Distillery District’s stunning lights and bustling Christmas market, going to see Soulpepper’s Christmas Carol can be nothing short of magical.