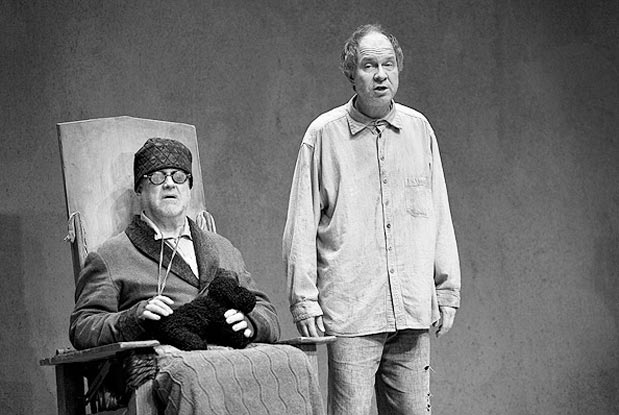 I went into Soulpepper’s recent production of Endgame hoping for the best. They’re my favourite company in the world and have managed to turn me around on more than a few texts I was sure were overrated until I saw them tackled by the flawless acting company at Soulpepper. The folks down at The Young Centre for the Performing Arts come at texts matter of fact-ly with open minds and genuine enthusiasm, and thus they are able to communicate remarkably clearly with their audience- “here, we made this for you”, “this is why we love it”, “this is why it’s important”, “this is what we mean to say”, “this is why we work”.  So I thought “hey, you know, I don’t like Beckett and I Really don’t like Endgame but maybe I’m being a closed-minded, simplistic grump. Maybe there’s something I’m not seeing here. Maybe the great Joseph Ziegler– so tremendous in everything from Parfumerie to Long Day’s to Salesman– can show me the way. Maybe Soulpepper has the answer.” So I gave it a shot. If anyone was going to convince me, it was Soulpepper and their exemplary ensemble of Ziegler, Diego Matamoros, Eric Peterson and Maria Vacratsis (I’d never seen the work of director Daniel Brooks, but I figured that if Albert Schultz invited him to direct anything, and he picked Endgame, there had to be a reason). Alas, it was torture. Perfectly executed torture, but torture nonetheless.

The more I think about it, the more convinced I become that there has never been nor will ever be a human on this earth as pretentious as Samuel Beckett. And by pretentious I don’t mean high-minded, fancy, unattainable, prissy, judgmental, condescending or any of the other adjectives often lumped in with pretension. I mean honest-to-god pretentious; meaning full of it and snooty about the it he’s full of. First of all, the stage directions in a Beckett piece are so strict that they allow for almost no artistic expression beyond the minute decisions of the actors- and I mean Minute- and if you don’t choose to follow those stage directions Exactly? Well, The American Repertory Theater was sued in 1984 for doing just that. They staged their Endgame in a subway tunnel and were ultimately forced to include the following statement from the playwright in their program: “Any production of Endgame which ignores my stage directions is completely unacceptable to me. My play requires an empty room and two small windows. The American Repertory Theater production which dismisses my directions is a complete parody of the play as conceived by me. Anybody who cares for the work couldn’t fail to be disgusted by this”. One must simply stage (not “direct”, “stage”) Beckett’s work exactly as put down on paper for all eternity, because lord knows there couldn’t possibly be anyone smart or creative enough to possibly Improve on the untouchable mastery of the gibberish Beckett wrote. His work is absurdist- meaning hard to understand or enjoy on a story level but often full of insight and metaphor- but when he was alive he shot down theory after theory provided by desperate theatre scholars looking for meaning. Godot is Definitely Not God (“if by Godot I had meant God I would [have] said God, and not Godot”  said Beckett)- well, okay then, could you maybe give us a little guidance as to What The Hell Is Your Point?! I’m not all that into absurdism, but I’m open to it as long as there’s some sort of intellectual challenge to the proceedings. But if Endgame isn’t around to be interpreted through our individual filters for the endless metaphorical potential, it feels as though it’s just there to make us feel like crap. Is that your point, Mr. Beckett? Because if that’s your point, I could not hate you more. That’s villainy, sir; now would you kindly take a Prozac?

Which isn’t to say that a good production can’t be achieved. Set designer Julie Fox, for instance, designed an excellent set within Beckett’s strict parameters for Soulpepper’s production- one that felt simultaneously expansive and claustrophobic, almost seeming to encircle the audience in its hopeless coldness. The actors all seemed to be doing a good job, at least I know them all to be top-notch actors and if I was given any kind of hint as to what they were trying to achieve I could tell you more effectively if they achieved it (I’m assuming they did; they’re Soulpepper. But still) Only Eric Peterson in the sympathetic role of Nagg managed to make me feel anything. He did so by beautifully playing his character’s most inescapable moment of despair. Despair’s not a rare thing in Endgame- in fact it’s a permanent state of being- but Nagg being the only character not completely marooned in his misery, I guess I cared enough about him to want to save him from joining the others. Peterson’s performance was full of the sort of vanity-free bare-knuckle vulnerability that astounds me every time. It’s too bad Nagg is the only character granted any sort of moment like that.

I try to be open minded, I really do. But I just HATE Beckett. I think he’s what’s wrong with so much of the theatrical landscape. I think he purposely keeps people out. His work fights off audiences by reveling in its own weirdness. He fought off scholarship by shooting down interpretation. Even after his death, he continues to fight a legacy of collaboration with threatening performance rights contracts and damningly strict stage directions. Beckett doesn’t want us. I don’t think he ever wanted us to love him and he certainly didn’t want us near him, even if we kept our mouths shut and our two cents in. I think he wants us to be impressed by the fact that he doesn’t want us. But I’ve never been one to be impressed by someone thinking I’m not good enough to keep their company.

*well, you might hear from me after curiosity and love for Tom Rooney force me into the audience of Stratford’s 2013 Waiting for Godot, but Then we’re Through.