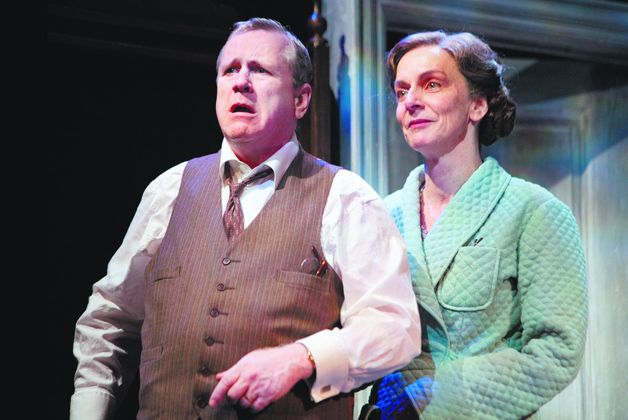 Soulpepper’s Death of a Salesman

Death of a Salesman is exactly the sort of piece that Soulpepper does brilliantly- intimate, personal, actor-driven, and a modern classic. The tight-knit company always fares well with family stories and any time you can cast the first couple of Soulpepper- Joseph Ziegler and Nancy Palk- as the parents at the centre of things, it’s a safe bet for sure success.

Here, director Albert Schultz stages Arthur Miller’s masterpiece of expectations simply but smartly, emphasizing the familial aches and what-if dream aspects of Willie Loman’s last days. Joseph Ziegler is magnificent as Willie- a role that’s been played by almost as many greats as Hamlet. My favourite thing about Ziegler as an actor is that he almost always plays his character as a good guy, which not only makes sense psychologically (very few villains knows they’re not the hero) but makes him someone the audience wants to invest in, even when he’s infuriating. And Willie Loman is absolutely infuriating. He’s stubborn and shortsighted and self unaware to the point of simply lying. But in Ziegler’s hands, Willie’s sweetness and good intention come out and his off-the-charts love for his sons (particularly Biff) drives him more than his desperation to be impressive for strangers’ sake (though that too)*.

Nancy Palk is radiant as Willie’s long-suffering and endlessly supportive wife Linda and her chemistry with Ziegler is wonderfully casual, an ease only a long-married couple can achieve while trying to establish the rhythms of a long-married couple. My one criticism (and you know how rarely I criticize Nancy Palk) would be that her relationship with the sons who are so protective of her isn’t as intricately developed as her work in Long Day’s Journey Into Night earlier this season. That might be a product of this being a remount from two years ago- it had a shorter rehearsal time this season than most Soulpepper productions and Mike Ross was just joining the cast as a Happy replacement. I really like Ross and his Happy is goofy and sad- a perfect combination for the overlooked character- but I’m starting to feel like he’s repetitive. He consistently gets at the emotional journey of his characters, but the charismatic actor himself (whom audiences know, out of character, from the Young Centre Word and Cabaret festivals) never fully disappears.

The same can likely be said of Ari Cohen (who plays the eldest Loman son Biff), but I’ve only seen him twice so that’s not damning yet. The smooth-talking charisma that marked Cohen’s turn in Speed-the-Plow gives his Biff that goldenboy touch that’s so crucial, but there should be more of an intellectual divide between Cohen’s two characters this season. Biff’s not dumb- he’s all about lost potential and constant restlessness- but he seems on top of every scene as played by Cohen, when Biff should feel perpetually uncomfortable in his own skin, tortured by his father’s shattered expectations and disappointed with himself and everyone around him (save maybe his mom). Cohen’s Biff is likable and dynamic, but he’s not multi-faceted the way I wanted him to be (he seems not all that different in the flashbacks pre-life-falling-apart from how he is in the body of the text). Michael Hanrahan and Gregory Prest can afford the relative simplicity of their characters (Loman neighbour Charley and his nerd-turned-pride of the neighbourhood son Bernard) because they’re under-written, but they pull out as many layers possible anyway, capturing that awkward juxtaposition of sympathy and “I told you so” self satisfaction.

Death of a Salesman is not perfect. It doesn’t have the across-the-board character acting of Long Day’s or the gut-punching audience effect of The Crucible, but it is moving, and it is sincere, and Joseph Ziegler carries the production as Willie Loman should- heartbreakingly, on his weak, exhausted, and slumped shoulders.

*I’d just like to note something interesting that appears in the program notes. It’s a story about Arthur Miller’s first Broadway hit- his uncle came to see it and immediately told Miller, unasked, that his son was “doing great” too. That story about oneupmanship  gives such an interesting perspective on this play and makes me think of my extended family and the lengths we go to to be perceived as the most impressive.