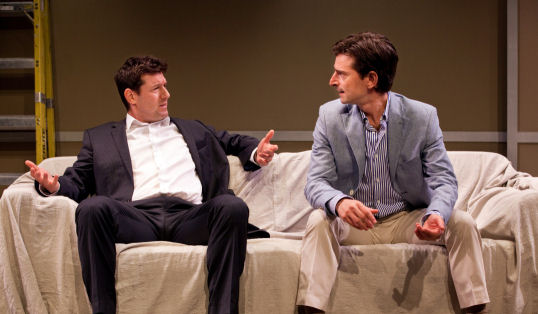 Mamet is a fantastic playwright; one of my favourites. His work is dark and invasive but also incredibly funny. In the right hands, Mamet can be extraordinary to watch or, rather, listen to. He writes in incomplete thoughts, long-winded musings, and abrupt expletives- essentially, he writes how we talk. At least the fast-talkers, he writes how we talk. He’s a thrilling writer, and a good actor always goes at him with a sense of honour at getting to speak, as Jordan Pettle appropriately calls it in his Artist Note for Soulpepper’s Speed-the-Plow, “David f*@%ing Mamet!”. In Soulpepper’s production, there’s a divide between he who thrives with Mamet and those who play it too safe to make it work.

As directed by David Storch, Speed-the-Plow is visually somewhat flat. Bobby’s office is tan and uninteresting (there’s a painting of a burning boat that goes up near the end- the metaphor’s not worth it), the clothes lack eccentricity, the blocking is largely still. From there, Ari Cohen valiently attempts to get at producer Bobby’s Hollywood change of heart. The challenge he faces is that the woman driving him towards “art” is far weaker than the man driving him towards “money”, meaning that his motivations seem less founded than they would, theoretically, in another production. Sarah Wilson plays Karen, the mysterious and manipulative temp who seduces Bobby into greenlighting a heady book that won’t make any money as a movie. Karen is a fascinating character, the one on stage most in control of her own life, but Wilson plays her too wide-eyed and silly to make her at all powerful. The fight for Bobby’s soul (and the career perks that come with it), is a one-sided affair because Karen, in this production, is entirely outmatched by Charlie.

I’d never seen Jordan Pettle in anything before Speed-the-Plow but you can bet I’ll be seeking him out after it. As Bobby’s “loyal”, ambitious, temperamental colleague Charlie Fox, Pettle is easily the star of the show, commanding my attention whether he was jumping over the couch, punching Cohen in the face, or just standing there, indignant. Mamet comes spitting out of his mouth with beautiful, malicious ease and, though Charlie’s passionate to the point of unhinged, he was the only character on stage whose reasoning I ever 100% understood. Instead of the smarmy money-loving, over-ambitious version of the character that easily could have come out, Pettle plays Charlie’s unencumbered joy at making a deal (he does a little Victor Cruz-esque salsa move when he’s too psyched to stand still) and the honest hurt he feels when Bobby dumps the superficial project they would do together for a “deeper” project he’d do with Karen. It’s a great performance, a tour-de-force filled with humanizing character work, and when he’s missing from the middle of the play, the audience deflates a little bit (and maybe starts to nod off until his triumphant act three return). Trouble is that Speed-the-Plow isn’t the story of Charlie, as witty and showy as he is. It’s supposed to be Bobby’s story and Cohen (partly because of Wilson) just can’t keep up with Pettle.