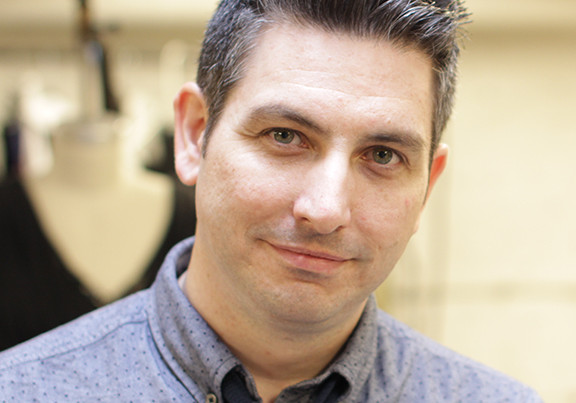 Last year’s winner for Best Lighting Design for his work on The De Chardin Project, Soulpepper Director of Design Lorenzo Savoini is nominated once again but this time in the Set & Costumes Outstanding Design category for his technically ambitious and beautifully atmospheric rendering of Eurydice‘s underworld.

Can you remember the first theatre production you ever saw?
I believe it was Peter Pan, and I think it was at the Elgin Theatre. I was around the age of nine or so. I don’t remember much about it sadly, but I do remember really wanting to go.

How did you get into designing?
In high school I was really interested in architecture and graphic arts. At the same time I also got the theatre bug. My high school drama program didn’t really have a stage design component, so I never saw the potential link between my interests. It wasn’t until I went to the University of Guelph to study theatre that I ended up working as a stage carpenter in my first year and was blown away by the set I was building. It was very metaphorical, very poetic. At the time, I hadn’t seen anything like it before, so I started to investigate the world of theatre design quite intensely. Around the same time I came across a feature article in Canadian Art magazine on designer Michael Levine. His work kind of ignited my imagination and I focused the majority of my training from then on in design and the visual arts.

What was the first show you ever worked on?
In high school I auditioned for the role of George in Thornton Wilder’s Our Town…and got it! I remember going to the mall and literally taking what money I had to buy a costume for the audition. Somehow I knew the costume was going to be important to getting into the role and showing how much I wanted it. I bought a pair of thick wool dress pants, suspenders and a shirt that was sort of right for the period. Anyway, that play was such an amazing experience, and I think it really peeked my interest in the classics and how powerful these stories are.

You won a MyTheatre Award last year for the lighting design on Theatre Passe Muraille’s De Chardin Project. What insight can you give us into that long-past production?
That project was so rewarding to work on, and we ended up being so proud of it. For me it was a great opportunity to continue my collaboration with director Alan Dilworth. I think that was our second production together since doing La Ronde at Soulpepper, and it was a great project to collaborate on. I remember Alan and I exploring some really interesting installation art as inspiration. We wanted a space that was an expression of both art and science; something physically bold that placed the actors on an island floating in the middle of the room with the audience on all sides. It meant a somewhat complicated reconfiguring of the Passe Muraille space, but I recall the design process and execution going very smoothly. The playwright, Adam Seybold, was very brave and willing to continue honing the script with Alan and the actors. They just kept refining it and distilling it down to something very beautiful right down to the last minute. I really enjoyed, as I always do, working with the sound designer Thomas Ryder Payne. He is a very special artist that brings so much depth to the environment and to collaboration. Yeah, that show was a real pleasure.

Your nomination this year is for the set and costumes for Soulpepper’s Eurydice. How did you get involved with Soulpepper and go on to become a Resident Artist and Director of Design?
I remember really being transformed by their production of Uncle Vanya in 2004 and I really wanted to figure out a way to work with the company. Coincidently they were starting a new training program and at the time I was really feeling I needed to take a left turn in my career. I was lucky to be a working designer, but there was a lot I wanted to explore and I wanted to create new working relationships and challenge my methodology and approach to theatre making. So I auditioned and was accepted to the program. That was ten years ago!   In retrospect, it is easy to see that it was a life changing choice. After it was done, I did go back to freelancing, but a few years ago we decided that it was in our best interests to figure out a residency scenario that allowed me to commit fully to the many projects and activities I found myself a part of. I am part of a lot of projects from the ground up, I develop curriculum and teach in the current design stream of the Academy, and I take on a certain amount of productions in the season. Soulpepper is an amazing artistic community that continues to grow in complexity and talent, and so far it is really working out.

Tell us first about developing the design concept for Eurydice. What were some of the things in the script that inspired you most?
There are many aspects of the play to contend with. Sarah Ruhl writes some big design ideas into the play, so you have to incorporate these moments into the totality of your idea. I think there is a kind of “whimsy” in the writing that many other productions seemed to try and exploit to the fullest, but Alan and I always interpreted the play to be much more a meditation on death. It explores the beauty in accepting loss, and that death is only the transformation to another state. Which is how we arrived at a steel wall that was in the process of decomposing, but in a sort of magical way. The rust was blue, and the reflection created an ethereal feeling. Some of the key inspirations for us were the light installations of James Turrell, as well as the Japanese aesthetic of Wabi-sabi. That is how the Stones characters ended up leaning toward a kind Butoh inspired imagery. We also took Sarah Ruhl’s desire for an elevator to the underworld and made it a sort of inside out coffin. It was filled with giant fuchsia coloured flowers covering the walls. I think we wanted to create an emotional space for the play to exist in, and we gave a lot of consideration to materials and colour.

What were some of the first conversations you had with director Alan Dilworth in developing the design concept?
We started by talking about how we personally related to the play. We kind of slowly discuss the piece from many angles until we begin to arrive at a kind of thesis or key notion as to what the play is attempting to communicate and share with the audience. We then consider the best way to both serve that key idea. It was about bringing to life a space that had a specific emotional sense to it. The play also has all sorts of practical requirements to contend with. Some characters are in the underworld, while others are not. So how we lay out spacial logic was kind of built alongside the more conceptual thinking. We talked a lot about the acceptance of transience and imperfection, and this strange pang of loneliness and beauty that ran through the piece. She is complex writer with a very sophisticated aesthetic, so it gave us so much room to bring a theatrical approach to it.

What were some of the technical challenges of the design?
The playwright demands a raining elevator. The rain shower was perhaps the greatest technical challenge. Water is always hard. It is sneaky and just when you think you’ve sealed everything, it finds a new way to escape. Also, working in rep at Soulpepper is always a huge added challenge to any show you do there. There is not much storage, and we have a quick window to get the shows changed-over, so it is always a dance with compromise.

Were you pleased with how the design worked in practice?
Yes, very pleased. The whole creative team and cast just became one brain. That is certainly Alan’s leadership, but also we just really collaborated beautifully. Kim Purtell (lighting designer) is a genius. She did a beautiful job using the fluorescent tubes throughout the set. Lighting can make or break a set design, and who I collaborate with is very important to me. Kim is one of those designers that always engages in a meaningful collaboration, and will take your design to another exciting level. I really trust her approach and I think we share a similar aesthetic, so I couldn’t be happier with how it all worked out.

Do you have a favourite moment from the production?
Yes. It has to be when Eurydice meets her father in the underworld and he builds her a room made entirely of string. It is almost a ten minute scene with no text, just watching the task be completed, while Eurydice waits. It was an amazing meditation on human beings’ relationship to time, how we take it for granted, and how poetry can be found in unexpected places. I remember we were worried how the first preview audience would deal with this moment, and it was truly transformative. You could see the effect on them emotionally.

What would you say is your top priority (either artistic or practical) in any design project?
Well I can’t say there is just one thing. First, would be collaboration with the director. For me to do my best work I need to begin with them at the beginning. I want to discover the play with them, and arrive at a design approach together. I also need trial and error time. I need to be able to start sometimes with ideas that are unformed, but through discussion, research, contemplation, and exploration we start to see something emerge. I also think it is important to be able, when possible, “rehearse the design”. That is to say, as much as one can, design ideas and the staging language are being explored in the rehearsal hall with the actors. Even if this means working with basic scenic elements, a few lights and sound, you really start to discover the world and how the design can be woven into performance.

What’s your favourite design you’ve ever worked on?
That is a tough question to answer. Maybe it’s Eurydice. Either that, or Of Human Bondage which is also a fairly recent Soulpepper production. I think both productions had a fantastic collaborative experience, but also both made meaningful room for design to find its voice in the production and integrate it into the performance as much as it could. I think both represent where my passion and aesthetic lives as a theatre maker.

What are you doing now/ what’s your next project?
Currently I am in the middle of interviews for the next Soulpepper Academy, which is daunting and a real honour. I am meeting so many exciting young designers throughout our country. I am also in studio designing set and lights for two productions that are in rep together in the spring at Soulpepper, Arthur Miller’s Incident at Vichy directed by Alan Dilworth, and The Testament of Mary directed by Aaron Willis featuring Nancy Palk.

Do you have anything you’d like to add?
Thanks so much for the nomination. I am very grateful.