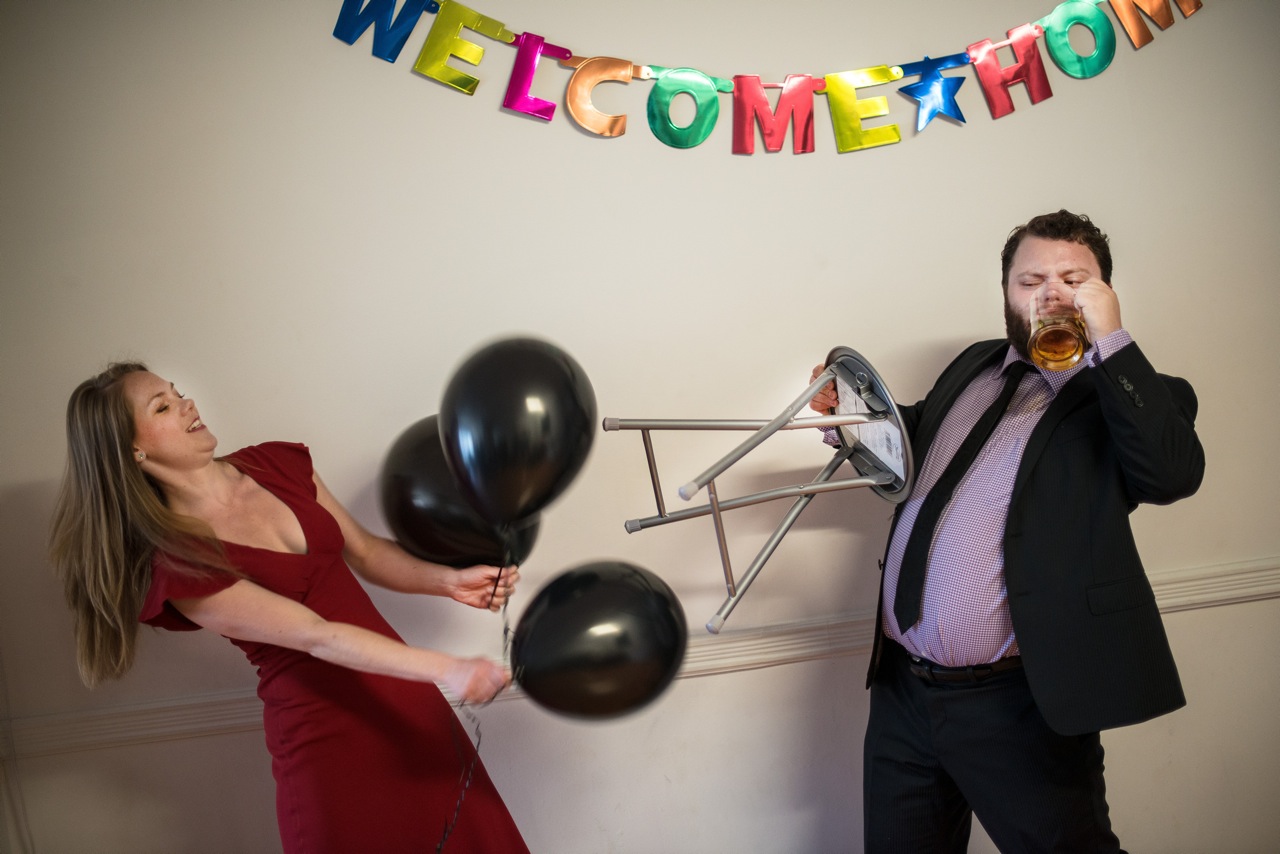 Kelly at the Fringe, Pt 3: I Do Love Nothing So Well As You

After two instalments of highly critical Fringe complaining (Part 1, Part 2– my colleagues were much nicer), I have two productions left to discuss. One was pretty good but not as great as I wanted it to be, one was one of the highlights of the year in theatre so far. But what they share is the participation of artists that I really like (and liked long before this year’s Fringe Festival). Two-time Performer of the Year Jessica Moss (creator/star of Polly Polly) and 2010 Best Actor winner Jesse Nerenberg (Don John in Much Ado) are staples of this site, people I write about constantly because they’re consistently fantastic (they’re also two of the first artists who caught our attention in the early days of this site). Shakespeare Bash’d is one of my favourite companies in town and their leading pair- James Wallis and Amelia Sargisson– are both coming off of nominations in the 2012 My Theatre Awards (as is Moss). What I’m saying is that this isn’t actually the article in which I talk about the Fringe plays I loved the most (though it is, because such things correlate), it’s where I talk about the shows that featured artists that I’ve come to love. I also just really like that quote from Much Ado so had to find a way to use it as a title.

Anyone who has read my embarrassingly blubbery review of her 2012 one-woman show Modern Love knows that I hard-core relate to Jessica Moss. We share a lot of details both superficial and otherwise (apparently we even went to the same high school, though not at the same time), but there’s a host of traits that divide us and they can pretty much all be traced to one marked, inescapable, large-looming difference: I am the sort of person who sits alone in the dark with my laptop writing about people who put themselves out there; she is the person who puts herself out there. In this case, out there means on the cover of NOW magazine and on stage at The Best of Fringe because her latest one-woman show not only took the 2013 Fringe by storm but appears to be the piece that is finally getting everyone to believe what we’ve been telling them since we awarded her the first of her two My Theatre Performer of the Year Awards in 2010: Guys, Jessica Moss is pretty awesome. She’s not perfect, but neither is anybody that anybody likes even a little bit. Her writing is fun and fast-paced, her energy indefatigable, her ability to move an audience almost unmatched. All that said, though it’s easily her most popular to date, I don’t think Polly Polly is her best work.

The high-concept premise begins with Polly, an everywoman of the Moss-y variety, looking at her life through a movie-making lens. Is she a worthy leading lady? Could her inciting moment be just around the bend? How does the song on her iPod set the tone for the coming day’s plot? It’s a strong start and a relatable concept. Then it goes from meta narrative fun reminiscent of Stranger Than Fiction to the wacky confusing-ness of a Charlie Kaufman film, getting a little lost in its philosophical mythology (please note I am not criticizing Kaufman, he’s a genius; I’m saying that Kaufman-level narrative ambition is probably best left to Kaufman). Polly is Polly but there’s someone else named Polly who is actually Polly and Polly needs to “find herself” in order to truly be Polly. Got it? Me neither. There’s a good idea at the heart of the play and it still makes an enjoyable (and wildly marketable, apparently) hour of entertainment with moments of poignance to match its biggest laughs. But, in my unpopular opinion, Polly Polly needs focus. It also may need a new medium. The one-woman show sees Moss jumping about covering entirely too much territory for one actress to handle (even if that actress has the one-woman showmanship and versatility of Moss). Modern Love was mostly a first-person narration with visual aids; for Polly Polly Moss is doing a handful of characters (including two versions of Polly) as well as a lightning-fast movie trailer narration. She also does her own effects and has only the help of her brother’s sound design and an insanely sparse set to back her up. Pre-recording the narration could help ease the hyperactivity (though the timing might prove tricky) but, as it is, the script is too frantic for the stage and might be better suited to a short film. Moss’ performance is a remarkable feat of energy, head-first dedication and vocal elasticity, but Polly in either iteration just isn’t quite as interesting as Jessica.

Enter the Fringe Fixers, not pursued by bears*

This has happened twice now. This year, like last, I seemed to strike out with the Fringe shows I picked (in all fairness, there were about 5 that may have been great but were canceled because of the storm). Everything was either terrible or just less awesome than I wanted it to be. Then I came to Shakespeare Bash’d. But, unlike last year when they were producing their inaugural show with a cast of faces I’d never seen before, this year they had expectations to surpass- the expectations that naturally follow having kicked Taming of the Shrew’s ass in 2012 (winning a My Theatre Award in the process) then hired two of our favourite Toronto actors to join their already solid ranks in taking on Much Ado About Nothing. I was expecting Shakespeare Bash’d to save the Fringe for me- a lot to ask- and they passed with flying colours.

I love these guys. They do Shakespeare exactly the way I most love Shakespeare to be done- simple and smart with an emphasis on story and character beyond anything else. There were only a few returning actors from Shrew (plus savvy director Eric Double) but the company retained its consistency. Across even the most minor characters, not a soul in a Shakespeare Bash’d show ever seems to struggle with the language. Much Ado isn’t actually in verse but Shakespearean prose is still chock full of pitfalls that trap many a decent modern actor, except these ones. Armed with clear textual understanding and refreshingly modern cadences, this ensemble took to the script as if they were making it up as they went along (I mean that as the highest of compliments, though it may sound a bit backwards) . The text was handled beautifully with efficient and sneaky cutting, smart double casting (Hero & Margaret as the Watchmen carved a really fascinating dynamic out of a dull secondary villain scene!) and not a single comedic beat dropped (an extremely rare feat).

The capable cast was led by the company’s greatest asset- Artistic Director/Leading Man James Wallis whose Benedick was even more winning than his fabulous Petruchio (although that could be mostly because Benedick > Petruchio pretty much always). Though his Petruchio erred on the side of sincerity over hilarity, Wallis’ Benedick is one of the funniest I’ve seen in both his merry war of words and the physical comedy that sees him crawling over audience members and attempting to hide in plain sight. He has a truly brilliant knack for finding the humour and relatability in Shakespearean language and manages to strike the perfect balance between Benedick’s soft heart and self-protective shell of carefully constructed witticism and avoidance. But, unlike last year, Wallis is not allowed to run away with the show, because someone had the genius thought of hiring the great Amelia Sargisson to play his Beatrice. Sargisson is a powerhouse emotional performer, lending her quirky and witty delight of a leading lady the sort of gravitas she needs to underscore the bittersweet proceedings (and command the stage completely). Beatrice is easily one of the most beloved of Shakespearean heroines but to me she’s always sat firmly in the shadow of the Rosalinds and Violas and other cross-dressing genre defy-ers… until Amelia Sargisson played the role. Now I want her to play everyone. Seriously, when’s her Hamlet happening?

Wallis and Sargisson- with their compelling take on a pair who have been played brilliantly many times over- formed the centre of a company that had their finger just as much on the pulse of Shakespeare’s dark comedy as the Whedonverse members who took it on mere months earlier.

*if you do not get this joke, I can do nothing for you.