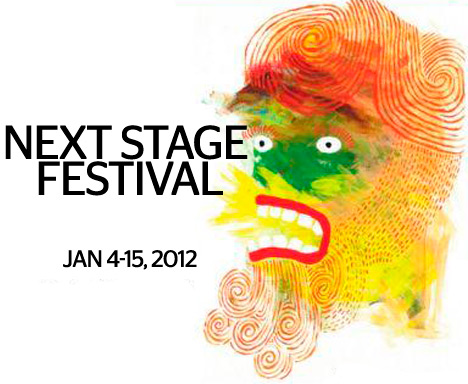 At the Next Stage Festival

The Next Stage Festival is the fascinating bridge between a show’s Fringe Festival run and its life beyond the circuit. It’s an inspired idea and a chance for some truly splendid indie theatre to get a little more attention than it did/would amidst hundreds of Fringe offerings in the summer. There are 12 shows this year (among them, Living with Henry, which I adored at this year’s Toronto Fringe); the sampling of 3 that I took in over the weekend was a mix of the thoroughly mediocre, the fantastically enjoyable and the heartrendingly brilliant.

I started off with The Tiki Bikini Beach Paradise Party A-Go-Go!, which I’d heard was a blast when it played at the Fringe this summer. I’m not sure what I was expecting, but I was certainly counting on something more impressive or at the very least more entertaining than what I got. The whole affair is really pretty dumb and not quite fun enough to make up for it. Weak singing and simplistic choreography are insurmountable issues when the plot and characters are satirically shallow. The songs need to be catchier, the talent needs to be stronger and the jokes, quite frankly, need to be a lot funnier for Tiki Bikini to work at all. Stephan Dickson’s “Mini Minnow” and Christopher Johnston’s Keanu-esque “Muscle Head” are the best of the lot, but it’s an uphill battle for the entire ensemble. The concept would make a great satirical film with better talent and a significant re-write but as a stage show Tiki Bikini is a harmless but shallow waste of time.

But an hour or so later, my faith in, well, everything was restored by the genius of Uncalled For presents Hypnogogic Logic. I’m told more often than is at all acceptable that I “don’t like comedy”. What these enlightened accusers actually mean is that I don’t like the type of comedy that is often hurled in my direction accompanied by a rim shot. I do not laugh at the “shocking” use of the word “balls”, nor do I think human excretion is at all noteworthy, let alone funny. More often than not, I find that bad comedians, lazy movie writers and TV hacks use sex, profanity, gender bending and basic body functions as a way to shock an unearned laugh from the audience- they get credit for daring to use a word that apparently we’re not supposed to use (but we all do anyway). Uncalled For makes the occasional sex joke, there’s a drag scene or two and a series of spit-takes are central to a particular scene in their show, but not once in the entirety of Hypnogogic Logic does Uncalled For make a cheap or lazy joke; they intelligently (though unpretentiously) earn every one of the zillions of laughs their packed house gives them. With the basic premise of exploring the illogical headspace between waking and sleep, Hypnogogic Logic is essentially a series of sketches brought to life by 4 fantastic dudes in life vests (in case they begin to drown in the dangerous waters of the human mind, I guess). As written by Matt Goldberg, Mike Hughes, Dan Jeannotte and Anders Yates (Hughes is the only one not in the show- he’s replaced by Colin Munch), the show is constructed as a sort of fever dream puzzle with seemingly unconnected comic anecdotes calling back to one another until it all links up and your brain begins to settle back into a more logical mode. As the four superb performers power their way through dozens of scenarios with different accents, ages, genders and settings, only a single Scooby Doo-esque wife character is a let down, everything else is glimmering genius. Yates’ side-splitting held jokes- a slow, painful chair push and focused audience-inclusive banana eating- get funnier the straighter he keeps his face. A choreographed number complete with backup dancers, a spontaneous somersaulting cameo, some harmonized quartet-ing, a paper airplane call to arms and a surprising operatic “Sweet Dreams” interlude are also highlights, as are the wine tasting sketch, a bit about “throwing some numbers around”, a post-apocalyptic Iron Chef ripoff and the universal wish that Freddie Mercury were still alive. My favourite, though, was about all of life’s answers being found in the dictionary, where the answer to “what comes after death?” is simply “debacle”. That sketch is led by the standout performer of the group, Dan Jeannotte, a charismatic and nuanced comedian with the exuberance and balls-to-the-wall commitment of a Lost fan searching for answers. In short, Hypnogogic Logic is a trip of epic comic proportions and Uncalled For a group of unparalleled talent.

Riding on Uncalled For’s laugh-induced high, I went to see Jessica Moss’ Modern Love expecting great things but not expecting to be ripped open and displayed for the whole theatre to see. I’ve always been fond of Moss- she’s a sharply funny comedian, a heartbreaking dramatic actress and an endearing stage presence- and her writing/performance in last Fringe’s Swoon! tapped into my own sentimental-meets-awkward sensibility like nothing I’d seen before. But alone on the stage of Modern Love, armed only with a multimedia screen and the script she wrote herself, Moss seemed to tap into my every thought and feeling. Tears streamed from my eyes as she, as the lonely but dealing Trish MacTiernan, laid bare her every insecurity, her deepest wishes, her biggest disappointments. I laughed with alarming understanding as she maligned the awkward drawbacks of Skype and praised the merits of a good cheese plate. I swooned just as she intended me to as the text-only online dating user “Charlie Brown” typed out his history with blanket forts and praised their “Dawson’s Creek banter”. I don’t actually know Jessica Moss, so I couldn’t tell you if she really loves the episode of Fresh Prince where Aunt Viv dances to “Everybody Dance Now” or if, at any given party, she finds ‘just a handful of people who are okay, some who are pretty great, maybe one who’s truly wonderful and a bunch who she wants to run over with a truck’, but what I can tell you is that I do. I love Dawson’s Creek banter and Fresh Prince and cheese plates, and I get annoyed when my best friend pays more attention to his cell phone than to me and I can’t stand most people at most parties and I’m truly awkward about Skype protocol and I will admit that my standards are too high and that I’m much more clever in print than in person and that I want people to like me more than I’m willing to admit or pander to and that of my 438 carefully selected Facebook friends I am truly good friends with maybe 6. See, Jessica Moss didn’t write Modern Love like a playwriting professor would have told her to- it’s not timeless or transferable, carefully plotted or reference-free-, she wrote it like a glimpse into a real person, a real life, a modern right-now right-here life, unafraid that a handful of audience members might not fully appreciate her references and anecdotes, let alone the technology at the centre of “Charlie Brown’s” existence. Trish MacTiernan is as real a character as I’ve ever seen, I can vouch for that, if for nothing else. And as performed by Moss, she’s hilarious and gut-wrenching and wonderful. There’s a moment near the end when Trish’s composure cracks and she grasps at the thought that someone might be out there listening to her. The moment doesn’t assume a response, but the audience on the night I saw Modern Love couldn’t help but reach out to the character Moss had so convinced them to love and they called out to her “we’re here, don’t worry!”; it was a remarkable thing to see. In any play, Moss is the sort of performer whose tears make your heart hurt even moments after she’s had you crying with laughter, but sitting in the Factory Studio Theatre with my arms crossed and my usual guard up, I still didn’t think I could be moved the way Modern Love moved me- to laughter, to tears, to astonished “how did she do that?!” vulnerability and to the sense that it’s possible my conditions are more universal than I think.

The Next Stage Festival plays at Toronto’s Factory Theatre until January 15th. You should go if you possibly can, because the treasures you may find there might be of untold value, like Modern Love was to me.