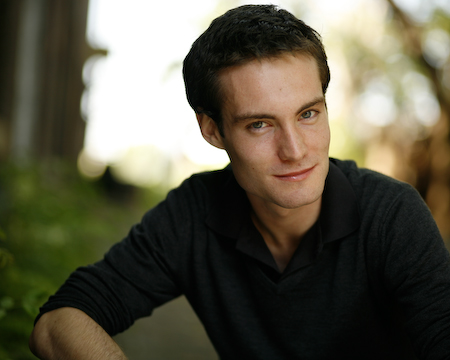 One of My Theatre’s favourite young actors in Toronto, Jesse Nerenberg first caught our attention in a brilliant production of Bent a couple summers ago. Now he is nominated for a 2010 My Theatre Award, Best Actor in a Local Production, for the role of Alan Strang in Equus.

Read on for Jesse’s insights.

When I was about 8 years old, I played the lead villain in my elementary school play, even though I was the youngest actor and about half a foot shorter than everybody else. I don’t think that I had ever even seen a live stage show up to that point in my life, but that experience had a great impact on me at the time. I think it’s safe to say that it was the very beginning of my love for being on a stage.

There is so much wonderful work being done by so many people in this city, that each show I see is another chance to find inspiration. I’m also finding that, in many ways, I’m most inspired by the many talented actors and actresses that I’ve gotten the chance to train with and to work with directly since moving to Toronto four and a half years ago.

That’s a really tough question! My very first instinct was to say the Globe Theatre in London, England. I saw a production of The Winter’s Tale and there was something magical about seeing a Shakespeare play in a reproduced Elizabethan theatre. But there are many stages in Canada where I would be equally happy.

Where did you study/develop as an actor?

I studied acting at the Ryerson Theatre School. It was a four-year BFA program and I had the time of my life, and met so many wonderful people.

To be honest, if you’d asked me this question six months ago I may have said Alan Strang in Equus. I’d wanted to play that role since I first read the play almost five years ago and I feel so lucky to have gotten that chance so early on. In terms of my next dream role, I’d love to play Edmund, the younger son in Long Day’s Journey Into Night. And maybe in 20 years I could play Roy Cohn in Angels in America. I think that would be a lot of fun.

I feel as if there are so many people that have influenced me over the last few years. I feel as if I’ve learned a great deal from three directors in particular: Eda Holmes who directed me in Serious Money in my last year of theatre school, Megan Watson who directed me in a production of Bent in the summer of 2009, and Elenna Mosoff my director in Equus. Looking back, I learned so much while working with those three wonderful women, which is great because I know that for a long time in this country being a director was a male-dominated field and still is. It’s very encouraging to see that this is starting to change.

This past summer, I filmed a TV movie for The History Channel called Storming Juno, about Canadian soldiers on D-day. It aired this past November, and my grandfather in Montreal, who hadn’t seen me perform in years, got to watch it. My grandfather was in the Air Force during the Second World War and I was so happy to have him see me in a movie about that period of history. He passed away a few weeks later, and it meant so much that he had gotten to see me act one last time. For that reason, it will always hold a special place in my heart, even if it wasn’t necessarily my favourite role or production.

Describe the rehearsal process for Equus.

Equus is a very dense and challenging script and it’s incredibly well crafted, so we spent the first several rehearsals dissecting it around the table. In many ways this was one of the most enjoyable parts of the process, because we were all trying to unravel it together. The more we dug and researched, the more secrets and hidden meanings we discovered.

The set made up of swings was, undoubtedly a defining feature of our production. We needed to figure out blocking using the swings that supported what was happening in the story. This was, at times, exhilarating and at other times very challenging, but I think it gave the production a very clear and unique style of staging. And what could be more fun than spending rehearsals playing on swings?

Tell me about Alan. How did you approach the role? Did you do anything specific to prepare? Are there any key components that a great Alan should have?

Alan Strang is definitely the most difficult role I’ve ever had to play. I’d be lying if I said there weren’t days when I felt as if the daunting size of the challenge was going to eat me alive. In many ways, one of the most frustrating yet rewarding aspects of the craft is the hours of work that have to be put into a role to allow the actor to make the performance appear effortless. I approached Alan the only way I knew how: wholeheartedly. It makes it more frustrating when you hit a wall, because you feel as if you’re giving all you can but not moving forwards, but it’s worth it in the end.


If I were to think of what key component it takes to play Alan I would say passion. Alan Strang is a young man with an incredible amount of passion and the actor needs to find a way to connect to that. And to always stay curious about it.

At times, working with the swings was definitely challenging, especially the large swing we had in middle of the stage. We had to be really vigilant with trying to stage some great moments while still making sure everyone was safe.

Full frontal nudity is contractually obligated in the rights to Equus. Any reservations about doing it?

In the end, the nudity wasn’t as scary as you’d imagine it to be. I’d compare it to jumping off a diving board: once you’ve taken that last step off the edge there’s no turning back, but you find that once you’re there it’s not as frightening as it seemed. And you can’t help but feel very vulnerable, which is a difficult place to be in life but a great place to be on stage.

How did you find working with Elenna?

Working with Elenna was a pleasure. She has a very strong director’s vision and is a great leader, which I think is one of several keys to being a great director. I was excited to work with her from the start, because I knew that, like me, she was just coming out of being in school, so she would have that drive and hunger. There was a day early in rehearsals when she said something that totally won me over: “I have two rules as a director: It has to be tight, and it can’t suck.” I loved that.

Definitely: the final scene of Act One, when Alan rides Nugget in a recreation of his midnight ritual. That scene was so much fun to do each night, and a little scary too, which is always good.

I don’t think that there has been a defining moment for me yet. I’m not even sure if life works that way. What I do know is that I’ve gotten the chance the work with a lot of wonderful people, and I hope that trend continues.

I actually have no idea what my next acting project will be. Things get very slow at the year’s end. But they’re starting to pick up again, so hopefully I’ll find something within the next little while.

Thanks a lot for the great questions. It was a lot of fun to reflect on all of these things again.