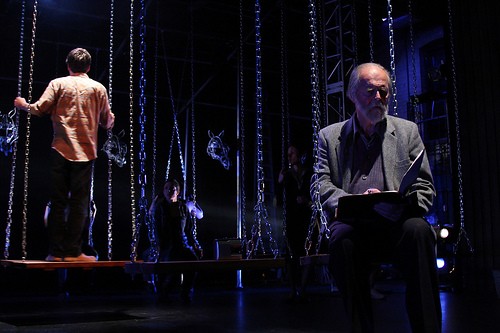 Let me start out by saying that this review is tragically overdue. I saw the production in November but my notes have sat idle on my desktop for months. But this week I had the pleasure of speaking with director Elenna Mosoff as part of the upcoming “My Theatre Nominee Interview Series”, a conversation that got me back to thinking about Equus and finally writing this review. So, apologies to the cast and crew for the delay- here it is.

The Hart House Theatre production of Equus this fall was a fascinating piece. I’ll admit that I know very little about Equus as a play, but what I do know is that it is very dictatorial in stage directions; it’s prescriptive, limiting.

But what Mosoff was able to do within those parameters was truly inspired. She lifted the talky, stagnant piece literally off the ground by filling the stage with dozens of swings. The visual of the chains holding the characters back, imprisoning them in their realities, was breathtaking. Wonderful sound effects, symbolic blocking and eye-catching shapes made possible by the swings added so much to the piece. The blocking was also exceptional, particularly the physicality of the horses and the way they came together to construct a larger form of themselves. Visually, Mosoff’s inventive take on the traditional Equus was superb.

The cast was more of a mixed bag. With the exception of Sonia Lindner’s generally strong Jill, the women were the weak points in the cast. In all fairness, I saw an understudy in the role of Hesther so her weakness is somewhat excusable, and Hilary June Hart’s nurse was just fine. I was not fond of Claire Acott’s doting portrayal of Alan’s mother, but his father was played with interesting complexity by Hart House regular Thomas Gough. All 5 horses were excellent, their physicality studied and deliberate, John Fleming standing out in particular with an enigmatic and compelling performance as the Horseman/Nugget.
Peter Higginson was a strong Dysart, conflicted and engaging, but it was Jesse Nerenberg’s production from curtain up to curtain call. One of my favourite young performers in Toronto, Nerenberg seems to possess a mature intensity unsurpassed by most actors twice his age. He brought incomparable energy and commitment to the intimidating role of Alan and embodied him with such thoughtful detail that he seemed to disappear into it. The way he collapsed his body in on itself in Alan’s weakest moments, his clarity of voice, the ease with which he moved from angsty teenager to enthralled young boy to dangerously troubled patient as the various pieces of Alan’s life were revealed, Nerenberg took command of the play’s pivotal role and conquered it with the ease of an old pro.

Between Mosoff and Nerenberg, Hart House’s Equus was a remarkable production to see. I can imagine no finer introduction to one of the most complex psychological dramas of the 20th century.