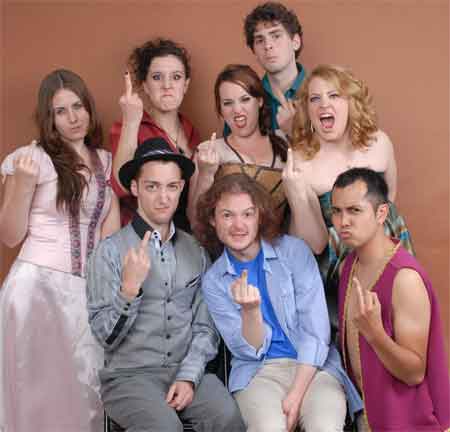 Click Here to read Part One of my Fringe 2013 saga.

Fuck Shakespeare sounded like something I might like. It was about a playwright (I love stories about writers; I generally find that writers do a good job writing them- who’dathunk?) and supposedly incorporated Shakespeare somehow. That’s more than enough reason than I need to check out a Fringe show that works with my schedule. Superficially, however, Fuck Shakespeare was a mess. The acting was amateurish, many of the jokes were obvious and hokey, and the structure didn’t make a ton of sense. Shakespeare’s heroines were either simplified or completely re-invented to suit the story’s strange needs and many familiar faces were smushed in seemingly just for the fun of it (did we really need to see Aladdin?). The best thing about Fuck Shakespeare’s surface appearance was Amelia Berzins’ on-point costumes that made the budget look more impressive than it could have been and somehow managed to do period and fantasy without looking like Halloween. All that said, Fuck Shakespeare had a soul that I liked. If you cut through the trappings and lack of polish, there were some sentiments within Fuck Shakespeare that hinted at playwright Zach Kornblum’s intriguing world view. Hearing his male characters debate the nature of love and relationships, it seemed to me that Kornblum was presenting his own thesis to his audience. He created a central friendship between men with theoretically opposing views on women, but as James Aaron’s eruditely crass sidekick argued the difference between love and sex by casually telling his friend that he loves him, any audience members still giving Kornblum the benefit of the intellectual doubt could see the intricacies of his character development, at least when it comes to their developed views on this particular subject. His taste needs refining, and he might need a writing partner with a stronger sense of story, but Kornblum is a playwright I want to hear from, even if I don’t particularly want to see Fuck Shakespeare again.

The Invisible City, was another example of classic Fringe missteps mixed with the sort of thoughtful invention that makes the Fringe so important. The idea for the piece was generated through interviews with Toronto’s homeless population. New company Who’s There Theatre- comprised mainly of recent graduates from York’s new devised theatre program- zeroed in on the recurring theme of their interviews, the sense of invisibility felt by society’s most marginalized group. Drawing to mind the exact premise of a classic Buffy episode, that concept was literalized into a scripted piece about an “invisibility epidemic” affecting those who feel isolated and overlooked. The concept is great, though admittedly hard to stage, and the thematic possibilities endless. But the point was largely lost in execution. Instead of telling a story from the perspective of the people who gave them the idea, Who’s There gave its audience an inhumanly wacky homeless narrator and a host of characters whose reasons for turning invisible ranged from less understandable to flat out unbelievable. A pair of upper middle class sisters formed the piece’s principal disappear-ees, though their lack of compelling reason to feel truly overlooked immediately took away from their story. Also disappeared was the grandson of a crazy old woman who visits the piece’s best-played character, Christina Demunda’s clinical and guilt-ridden psychiatrist. The boy, as I understand it, disappeared years before the epidemic in question began, leading me to ponder why his story was being folded in at all. His grandmother- old and alienatingly confused- would have been an intriguing person to have disappear, especially considering the lengths Demunda’s character went to to avoid really listening to her. But she didn’t disappear, the doctor disappeared (do not ask my why). By the end of the piece, the epidemic seemed less thematic and more completely random, losing the really great point that spawned it. The Invisible City’s program listed a whole crowd of various dramaturgs (a role designed to help focus a piece) yet it somehow suffered from an overpopulation of ideas that didn’t connect coherently. Who’s There needs a single, strong outside eye to come in and tell them honestly what’s working and what’s not and how to focus in so their good ideas don’t get lost in the crowd of their lesser ones.