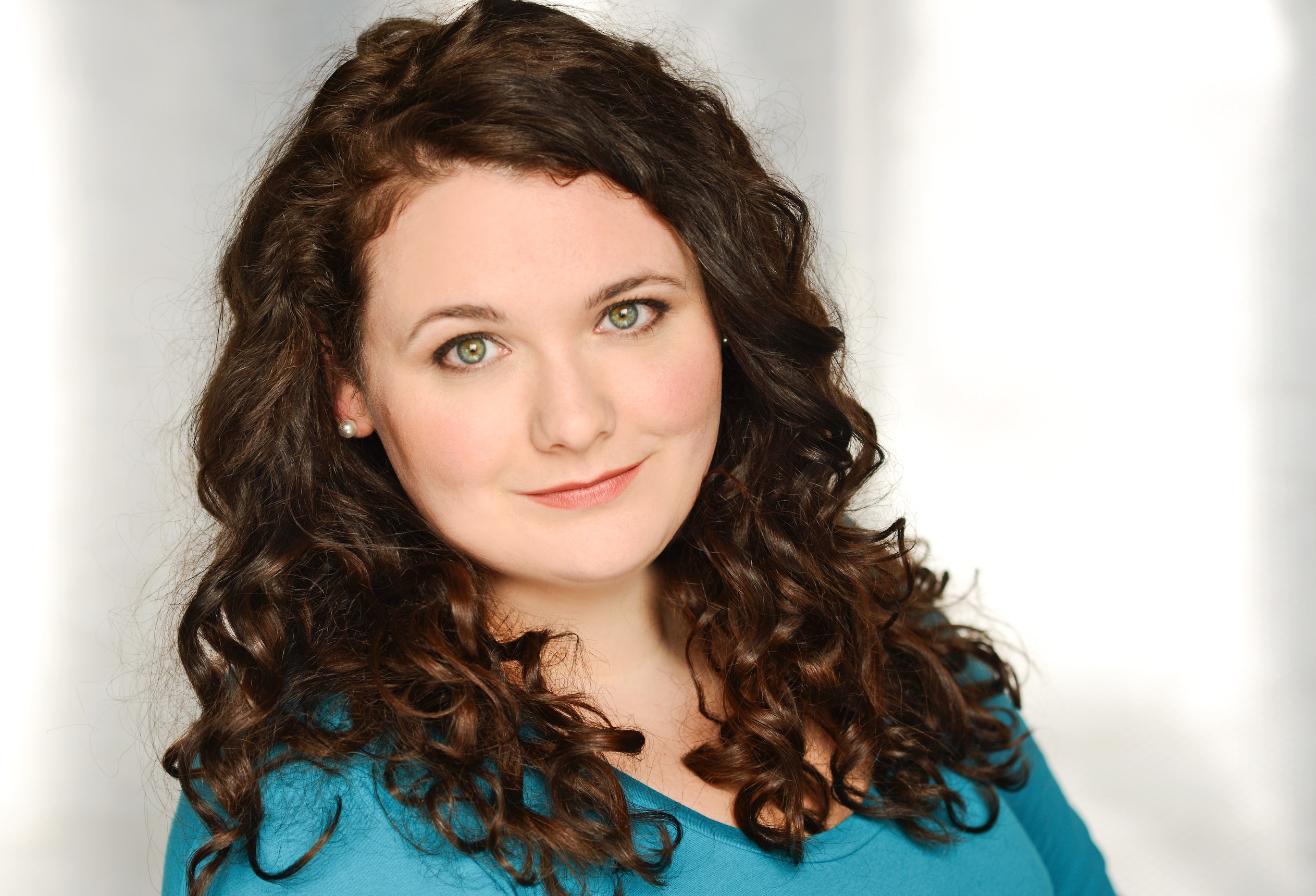 A longtime My Theatre favourite, previous Best Supporting Actress nominee and two-time Performer of the Year, Jessica Moss’ foray into the self-written one-woman show at the Next Stage Festival, Modern Love, was an unforgettable piece of honest storytelling.

The vibrant actress- nominated in the 2012 My Theatre Awards as a writer for Best New Work– talked to us about making that artistic leap from one theatrical role to the next in what just might be our wittiest interview of the year.

Can you remember your first experience with theatre?
There are vague memories of seeing a production of Peter Pan when I was really young (and being amazed that they all flew!), and some fairy tale at Casa Loma where a character who was very round was named Sir Cumference. My dad had to explain that joke to me but once I got it I thought it was the most brilliant thing I’d ever heard.

I was one of the kids brought onstage at the end of a pantomime when I was about four. It was Aladdin starring Jeff Hyslop from Today’s Special and Karen Kain as the genie.  I had to elbow some other kid to get up there, and was just pleased as punch with myself that I got on that stage. Jeff Hyslop had asked me a question and I was so eager to please and chuffed with self-satisfaction that I just said ‘yes’ even though I didn’t know what he asked and the whole audience laughed with/at me. Then they said they didn’t have a prize to give me (even though all the other kids who had come up had got prizes), and I was on the verge of hysterics when Karen Kain came out and gave me a Sugar Crisp bear, which to date remains the only prize I’ve ever won in theatre.

Would you still consider yourself primarily a performer? Where does writing fall on that hierarchy?
I consider myself a wannabe/aspiring actor-writer (or, when I’m feeling fancy, a performer-creator). I feel like I’m not either yet, but I’m working on them both, and the people that I admired the most growing up had a hand in both. Due to my contrary and nervous nature, when I’m doing one, I’m panicking about not doing enough of the other. I am constantly worried that if I focus on writing, people will not use me as an actor, but when I’m acting, part of me just wants to do my own silly little thing instead of what’s on the page. If I had my way, I would flit back and forth between the two like an artistic but angst-ridden hummingbird.

What’s your favourite part you’ve ever played or production you’ve been a part of?
I was Helena in a university production of A Midsummer Night’s Dream, which was incredibly fun and I made a lot of friends that are still in my life. That was just such a dream part for me for such a long time. I’d love to do that one again.

And I did a production of Alice in Wonderland at Sudbury Theatre Centre. Alice is one of my favourite stories, and I got be a ton of characters, including the Caterpillar, the mouse, a Tiger Lily, the Duchess, and the Queen of Hearts.  The Queen of Hearts! She was so much fun. It was a really theatrical, fast production. I was so thrilled to be in that.

What do you think is the best thing you’ve ever written?
Once I made a grocery list and I didn’t forget ANYTHING.  But then I forgot the list at home and just bought Cheetos.

In high school I wrote a lot of songs to help me both memorize stuff for exams and get points for creativity in presentations. One was about how dolphins communicate to the tune of ‘Under the Sea’, and one was about the birth control pill set to ‘I Will Survive’, which has actually worked its way into a play I’m writing.

Tell us about Modern Love. Where did the idea for that play come from?
I wanted to talk about loneliness and my deeply troubled relationship to Facebook.

How much of it is based on you and your experiences?
Well, writing for me is personal, and therefore political. There’s something in what I write that I feel needs to be discussed, or is worthy of an audience. I felt strongly enough about my own sense of isolation, my own confusion about how to relate to people, that I thought it could be a play that someone might want to watch. Even when I was struggling with how the words come out, the issue, or my opinion about the issue, was something I wanted to communicate. So in that way, for Modern Love and for stuff I’m working on now, whatever I create comes from my heart. Deeper even. It’s who I am. And as I continue to write, I want everything to come from this place. I want things to be incredibly, harrowingly truthful.

That said, I haven’t done online dating. I researched it a lot. I’m not the biggest tech person. The character in Modern Love was parts of myself blown up and parts of myself that I pretend to be, and parts that work dramatically. Some of the feedback from Modern Love was that it was overly personal, and I have definitely experienced being conflated with the character I play, which I find a bit frustrating, especially coming from critics who don’t know me personally, or even professionally. It’s a theatricalized version of something that I want to discuss. So it’s me, but it isn’t.

What’s your writing process like? Do you plot and plan or just start at page 1 and work through?
I don’t think I’ve written enough to have a process. I definitely have images that I think are theatrically interesting and tend to go from there. A huge step forward with Modern Love came when I realized there was a giant screen. And I realized there was a giant screen because I was stomping around King Street and ‘Modern Love’ by David Bowie came on my iPod and I love the part when he goes ‘Bye bye’, and I thought it would be so great to end a show with the words ‘Bye bye’ flashing, in time to the music, on a giant screen, wishing the audience a good night. And that’s where the screen, and therefore Charlie Brown, came from. I’m in love with theatre and so that’s what I write for, and for the most part things start for me with an image that I think would be exciting for me if I were in an audience.

I write on my feet a lot, talking out loud or figuring things out physically, how a character stands or how I create some kind of feeling for a scene by transitions or presentation, and then that informs the words.

I have carried a book to write in around with me every day of my life since I was about twelve. I STEAL EVERYTHING THAT ISN’T NAILED DOWN. If you say something interesting to me, it’s in my book, and I’m waiting for a project to use it in. I listen to a lot of music and make playlists related to the feeling of all my projects.

I’m immensely disorganized and never have plans and I just kind of write everything connected to a piece as it comes in a long Word document and then move pieces around, and everything I read about how to write indicates I’m doing everything wrong.

I stare at things a lot and I cry a lot and I run around my house swearing I’m going to do something else with my life a lot.

It was just you and your own words on stage for Modern Love– how did you handle such singular pressure? Did you feel like you were exposing yourself to the audience more than you’re used to?
I think that identifying with material, being exposed emotionally, are things that I practice as an actor all the time, so to connect deeply with a character or a text isn’t new. But performing is always nerve-wracking. And then I’m not established as a writer, I had no idea if anyone would like my writing, so to have both of those things at once was a lot.

It’s hard to share an opinion, or a feeling. There’s always the worry that if you give a piece of yourself away, someone will make fun of it, or it won’t come back to you in the same way. That’s true in writing and acting, so when you do both, Jesus, good luck to you.

Are you very prescriptive in your stage directions or is each play re-imagined a bit in the rehearsal process?
Some stuff I write and have no idea how it can happen. The twitter scene was initially like that, I just wrote tweets and had no clue how to perform them. And then I tell myself, ‘you wrote yourself into this mess, you can act yourself out!’ And then we figured it out, just by working through things, trying things. Some of the stuff I’m writing now, I have no idea how to stage it. I don’t know if it’s possible to stage.

But, and I get in trouble for this, the stuff I love the most is when I have a complete image of everything, what the physicality of characters is, what the stage feels like, the music, the lights…I like to write the whole world. I get in trouble because people say I’m trying to direct the play while I’m writing it (this is exactly what I’m trying to do), but what I’m most interested in is that completion, that feeling in theatre where the technical and the emotional and the verbal and the visual are completely interconnected, you can’t pull one out from the other. The music is the words is the picture is the play. The moment. Ah, that’s the best! I’ve thrown stuff away because someone didn’t want to use the world I had created in the piece, they just wanted the text, without the stage directions, or the picture. And I wasn’t interested in the text without the world. So I write stuff that either has a lot of stage directions, or, when I’m performing it, I come to rehearsal and say, ‘I know what this looks like’. Also, I’m really bossy and difficult.

Besides yourself, who would you say has been the most influential person in shaping your career thus far?
My high school drama teacher and now friend, Angie Silverstein.

What are you doing now/ what’s your next project?
I’m writing a lot of things and apparently I have to start watching Game of Thrones, but I’m not really feeling it. [I was at] The Sudbury Theatre Centre in March to perform in The Clockmaker which was super exciting. Then I’m back to praying that someone will hire me to act or be interested in something that I write.

Do you have anything you’d like to add?
Thanks for seeing the show and giving me this opportunity. I really appreciate it. And here’s a tip: put a pinch of sage in your boots, and all day long a spicy scent is your reward.