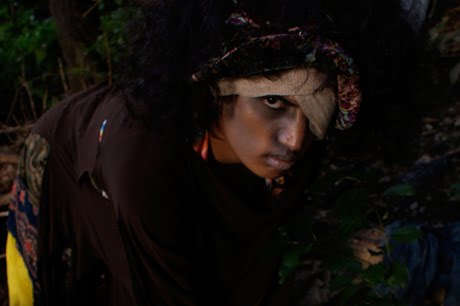 The Devils of Trinity Bellwoods

The more I see of the Red Light District Theatre Company the more I like it. That distinct world of experimental theatre in which the RLD so comfortably dwells has never quite been my cup of tea, but after their enlightened Woyzeck and now with an innovative Summerworks offering, I’m finding that this quirky company is steadily changing my mind.

I spent my night tonight traipsing around Trinity Bellwoods Park after 9pm as the sun set on Toronto’s Queen West. As part of the annual Summerworks festival, the RLD presented their version of The Witch of Edmonton by Thomas Dekker, William Rowley and John Ford. I say “their version” because nothing the RLD ever does belongs in any way to anyone else; they re-invent everything they do, no matter how old or established their source material. This production, for example, saw a mismatched company of mime-faced players leading their audience through a pedestrian play in the park, lit entirely by flashlights. Seriously, at one point director/actor Ted Witzel got in a barking match with a local pet cavorting at the nearby dogpark- you just can’t make stuff like that up.

The Witch of Edmonton as a whole was a remarkable piece of theatre. The largely omnipresent actors improvised in character as they led their herd of onlookers, often to great comedic effect. The beautiful park was used effectively and the sometimes disruptive and unpredictable surroundings were embraced as characters unto themselves. RLD regulars Marcel Dragonieri, Lauren Gillis, Kat Letwin  and (the especially brilliant) Eve Wylden each brought a great sense of invention to their 400 year old parts. Reid Linforth (an erstwhile tortured Woyzeck) gave a beautifully endearing turn as the town innocent Cuddy Banks, and Jonah Hundert gave the questionable character of Frank a fascinating hipster edge. Michael-David Blostein’s Sir Arthur Clarington was a terrifying blend of authoritative charisma and pure creep factor, though his sitting comfortably in Blostein’s usual character wheelhouse made the character pop a little less than he otherwise may have. Jessica Moss, a vibrant young actress quickly becoming a My Theatre favourite, was heartbreaking as Frank’s jostled first wife Winnifred. And great praise is deserved by Mina James, who gave a stunning performance as the titular Mother Sawyer, a demandingly physical and pathetic role which she absolutely nailed.

However, in my mind, there was one true star turn in The Witch of Edmonton, that of Ted Witzel (on 2 counts). Firstly, the artistic director’s performance as Tom the devil dog was nothing short of staggering. He was terrifyingly alluring, dangerously aggressive and inexplicably convincing as a talking dog who looked nothing like a dog. His movement, posture and sounds were so precise that he seemed as if he’d been through extreme canine observational training. Witzel was at once all dog, all devil, all charismatic stranger and all sexual fantasy. His performance was obscenely committed and consequently the kind of good that leaves you unsettled for the rest of the night.

On the flip side of Witzel’s contribution to The Witch of Edmonton was his artistic vision with co-director Chatherine Dunn. When I interviewed him about his production of Woyzeck earlier this summer, Witzel stressed the importance of helping those ostracized by society. The uber intelligent and focused director’s point of view on that subject came through loud and clear in The Witch of Edmonton. Armed with that insight going in, I knew what to expect from the play about a persecuted innocent who succumbs to the role society presses on her (as much as one can know what to expect when facing an RLD production). But it was the reach of that message that was truly impressive.

The characters of Edmonton have their corruptions revealed throughout the course of the play; we clearly see their hypocrisy, their blindness, their lack of compassion. But Witzel and Dunn take it a step further, testing the modern audience against the same standards as their characters… a test we collectively failed. This production didn’t play by regular theatre rules: we could eat, we could sit or stand, we could even talk to the characters if we liked. Essentially, we were given the power to interfere. But no one took it. We became bystanders, guilty by association as we watched Mother Sawyer’s persecution, Susan’s murder and Cuddy’s abuse and did nothing to stop it. We stood idly by as Sir Arthur fondled the praying Winnifred, stepped over a broken Cuddy as he attempted to drag himself up a set of stairs (he was in our way, after all) and only one reluctant audience member responded to Mother Sawyer’s call for help, after much prompting. And while our apathy made it a struggle for Tom the devil dog to engage mob mentality against Mother Sawyer, he was tragically successful in the end as the audience joined in his chants for her destruction.

As a reviewer, I made the conscious decision to stay out of it all, watching Witzel and Dunn’s social experiment unfold without participating in the abuse or the rescue. I’d like to believe that if I’d been less committed to my neutrality I would have done something, help Cuddy up the stairs at the very least. But alas I didn’t, and neither did anybody else.

The Witch of Edmonton was written in 1621, based on supposed true events, and revealed the corruptions of English society at the time. The RLD’s production was performed in 2010 and aptly showed us a cast of hypocrites throwing stones, teaching us a lesson about who the bad guys truly are. Witzel and Dunn’s larger experiment wasn’t about some bad people in an English town 400 years ago, nor was it really about Mother Sawyer’s tormentors at all, it was about us and the fact that we’re no better.