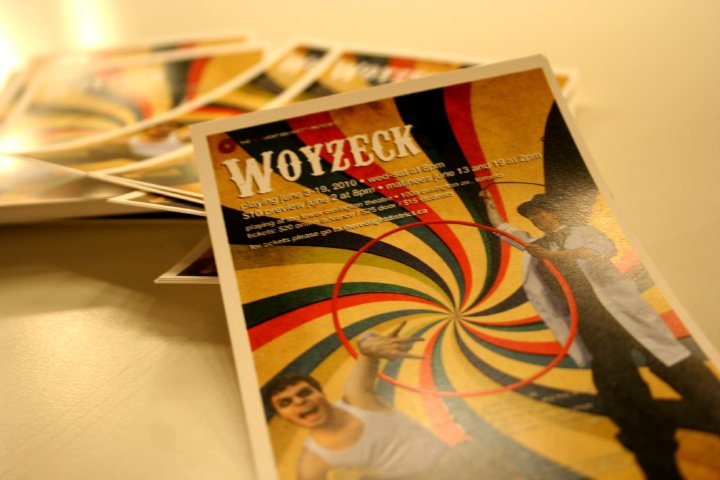 The Mad World of the RLD

The Red Light District Theatre Company is just a little bit crazy. As the tagline for their most recent production, Woyzeck, says, the company stands “just over the little dash between yes and no”. From their bum fight-inspired Titus to “the play about dancing robots and communists” to this run of Woyzeck, The RLD is constantly striving for innovation. A quote from their website seems to sum up the introspective artistic intellectualism that seems to embody the company, “what are we afraid of? the answer, in theatre as in life, is invariably ourselves. And so from the ashes of revelation we must rouse, and we must rise, and we must, absolutely, revolt.” What are we afraid of? RLD springs from a question and in their attempts to answer it they only strive to ask even more.

I asked director (and RLD artistic director) Ted Witzel what it was he wanted the audience to take away from Woyzeck. His reply? “I hope they’re asking ‘what the fuck is wrong with the world?’.” Witzel knew he wanted to tackle Woyzeck because he was sure that German playwrite Georg Buchner had a lot more to say than any English translation ever let on. “Most people take it to a place of domestic tragedy” said Witzel, but he was determined to convey the many forces pressing down on Woyzeck, driving him mad. In conjunction with his mentor, German director Johanna Schall, Witzel set about creating his own translation of the unfinished play.

The product was a meticulous translation that gave in English what Witzel believed was the genius of the original German: “I had this idea that there was something more going on in the original. Buchner is really clever in the ways he plays with grammar and syntax. He invented this fake dialect to do a case study of the poor people in Germany at the time. Having to develop a new syntax for each character in the play was a really interesting challenge”. While brilliant details such as the waltz rhythm of Woyzeck’s obssessively repeated line “ever so” may slip by unnoticed by anyone not granted personal insight into Witzel’s intellectually stunning interpretation, the distinct syntax of each character was unmistakable.

With both his translation and his directorial work, Witzel also succeeded in tapping into what he emphasized as an integral aspect of Woyzeck as an artistic examination. The world Witzel created around Woyzeck was indeed a mad one. The character’s life played out as a literal and metaphorical circus. The oppressive forces that tortured Woyzeck froze omnipresently in grotesque tableau when they left the stage, their existence haunting Woyzeck from the very walls that surrounded him. Marie’s affair played out as a cage match between lion and tamer, the Doctor’s experiments as a sideshow act. The interactions between the Captain and the Doctor seemed to exist in a time warp as the two went through the motions of their little dance time and time again. In this circus world where time is immeasurable and the lines between person, place and thing are invisible, madness seems the only option. Witzel’s Woyzeck is far from the simplified domestic tragedy he spoke of; it’s a tragedy of one man’s entire world.

My conversation with director Ted Witzel served as an invaluable tool in my processing of the complexly strange production. Inexperienced with the Brechtian tradition of experimental theatre, there was simply no hope of my connecting with Woyzeck save for Witzel’s insight. His joy at recounting RLD’s earliest productions and the slyly guilty way he confessed to having not actually read Woyzeck when it was assigned to him in University allowed me to take RLD’s intimidatingly artistic trappings in stride. For every polarizingly “alternative” sentence on the website, Witzel had a correspondingly down-to-earth counterpoint: as much as the company may stand for high minded boundary-pushing, it was realistically founded so that a bunch of inspired people could put on a show that no one else would back. RLD’s production of Woyzeck was much like Witzel himself: it had a distinct point of view, a definite style and an intimidating turn of phrase but was ultimately as understandable as anything.

In a superb cast filled with incomparable energy and 110% commitment, Eve Wylden stood out as an actress of astronomical talent. Her off-kilter interpretation of the doctor was startling, upsetting and altogether mesmerizing. The creepy way she smiled just a little too big and moved her head just a little too much gave her doctor a tangible element of dangerous joy. As for the rest, I took an immediate dislike to Lauren Gillis as Marie, which was, I believe, the point. Fearless actress Gillis took to the untrustworthy character and was unrelenting as she irked me for the remainder of the evening. Whitney Ross-Barris, in multiple roles amalgamated into one singing bearded lady, was an omnipresent multitalent, giving volume to a world of voices in Woyzeck’s head as well as many outside of it. Julian Dezotti delivered the night’s clearest performance as the clown who seemed somehow the sanest at the circus. His grand speeches touched even the most cynical of audience members and his presence held all the command of a classically trained actor. Mike Mackinnon, Marcel Dragonieri and Brandon Hackett rounded out the cast nicely as distinct contributors to Woyzeck‘s mad world. Woyzeck himself, Reid Linforth, handled the part aptly, conveying a constant sense of unease and bringing the audience right along with him on his experience of insanity. With easily the most poetically troublesome syntax, Linforth was remarkable in his ability to convey meaning and intention behind layers of muddled words and seeming madness. He created pathos for a murderer, which speaks for itself.

Before the performance, Witzel spoke of the importance of institutionalization. It was almost alarming the ease with which he rattled off the names of gruesome murderers from recent history. But it was the quote “no one stabs someone in the head 40 times in his right mind” that somehow drove home the essence of what Witzel was getting at with Woyzeck. As a society are we mad for ignoring those showing signs of madness? Witzel points out that almost everyone at some point cries for help, as he believes Woyzeck does, and it is the world’s responsibility to take them in and help. Instead, those crying are usually ostracized and pushed further down the rabbit hole, often with psychopathic consequences. The madness never gets a chance to heal in a world intolerant of madness. So Witzel, through Woyzeck, wants his audience to ask: “What the fuck is wrong with the world?”.