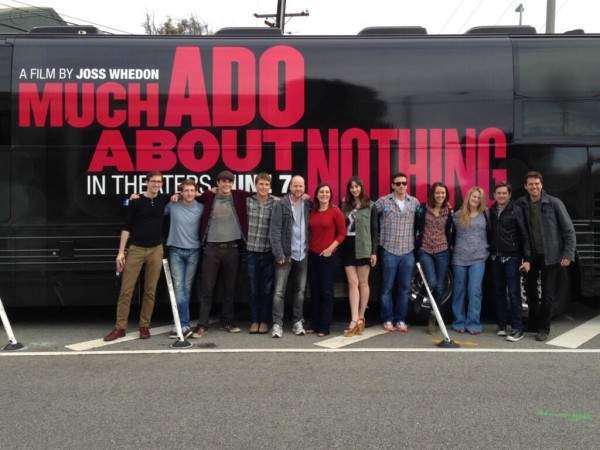 There are a lot of exciting films coming out in 2013 (here’s looking at you, Catching Fire!) but none of them have us as psyched as the impending release of Joss Whedon’s Much Ado About Nothing. The My Cinema staff is excited, the My Theatre staff is excited, the My TV staff is excited- the film, which finally hits wide release this Friday, is the combination of So Many of our favourite things (Shakespeare! Whedon! Denisof! Acker! Maher! Fillion! Kranz!). So our celebration will be four-fold, including THREE exclusive interviews and our review of the film from its world premiere at the Toronto International Film Festival.

On Monday we kicked things off in Part 1 with Amy Acker, the Whedon regular who the director hand-picked to play the witty but lovelorn leading lady Beatrice. Click Here to read Amy’s full interview from the 2010 My TV Awards and Here to read her thoughts on Much Ado the week the news of the film broke.

In Part 2 we re-posted our recent Exclusive Interview with Fran Kranz, the brilliant Dollhouse/Cabin in the Woods alum who plays Claudio in the film.

Yesterday was Part 3, the last in our mini-series of interviews with the cast. When the film came to TIFF for its World Premiere, Much Ado‘s gracious villain Sean Maher was kind enough to meet me for a one-on-one at The InterContinental Hotel downtown. I was beyond thrilled to meet the man who brought my favourite Firefly character to life and Sean was even more dashing in person than expected. In the crispest of blue suits and armed with a giant bottle of coconut water, the thoughtful and charming former Dr. Simon Tam proved as personable as they come as he brightly recounted his time on that legendary series and took us behind the scenes of Much Ado‘s top-secret 12-day shoot.

One of the best movie-going experiences of my 2012 was part of the Toronto International Film Festival. I never go to TIFF. In fact, I usually avoid downtown altogether while it’s going on. But when I found out that Much Ado was going to be there, I couldn’t help myself. When news of this film’s existence appeared online, all my friends started sending me the link with subject lines that read “wouldn’t it be awesome if this were real?!”. But it is real. And it’s Great.

This movie was sort of like the Kelly version of what The Avengers must have been like for a true comics geek. The scope of Whedon fandom is far and wide and what makes it stretch so far is the fact that we all love him for different reasons.Yes there’s a general consensus about banter and character arcs, but, beyond that, he’s got horror fans and sci-fi fans, musical fans, superhero fans, dystopia fans, fans who I wouldn’t quite call horror fans but are in it for the hot vampires- and often those groups don’t overlap much outside of the Whedonverse. Me, I’m in it pretty purely for the banter and character arcs (I don’t much care if you’re a vampire, a doll, a supervillain or an antisocial doctor guy, show me courage, loyalty, and growth and you’ve got me) but what really puts Joss Whedon on his pedestal above other creators of considerable talent for me is simply that he himself is so interesting. It’s not actually his work that I hold to a high standard, it’s him. I like that people who’ve worked with him once all clamour to do it again; I like that he’s smart and cool and weird enough to host Shakespeare readings at his house for fun; I like that he picks projects that he thinks will be fun, whether they’re good career choices or not (I mean, a guest arc on Husbands? Okay. A cameo as a bathroom coach in one of BriTANicK’s weirdest videos ever? Sure); and I super love that all those independently minded, smart kid, beloved social nucleus parts of his identity came together in a bizarrely perfect package for Much Ado About Nothing. From the story of the film’s conception and casting to its insightful and fun execution (there’s even original music in the finished product for crying out loud!), Much Ado is the Joss Whedon film that is, to me, the most Joss Whedon-y, even if it doesn’t sport anything that could be called “genre”. The story goes that Joss and his wife Kai were supposed to take a vacation post-Avengers but instead Kai suggested that Joss use his two vacation weeks to finally shoot the modern version of Much Ado About Nothing that he’d had on the backburner for years.He’d already adapted the script and planned to shoot at his own house- and he had two weeks off, after all. Who CAN’T shoot an entire film in two weeks?- so the thing got rolling under complete wraps until after the whole film was in the can and Joss finally let Nathan Fillion back on his twitter account.

To do the film, Whedon assembled a dreamteam of his frequent collaborators and friends. He got star-crossed Angel lovers Alexis Denisof and Amy Acker for his feuding leading roles (Acker being the most noted attendee at Whedon’s famed readings, her off-the-cuff take on Lady Capulet having inspired him to kill her character Fred to allow her the more regal challenge of playing the goddess Illyria).

He recruited the now casually super famous former Firefly/Dr. Horrible star Nathan Fillion to make a fool of himself as the clownish Dogberry and brought back Buffy’s beloved Andrew (Tom Lenk) to be his sidekick.Giles was busy so he went with Agent Coulson for Leonato then made his most unexpected move by casting Dollhouse brainiac/Cabin in the Woods stoner Fran Kranz in the gushy romantic Romeo-like role of Claudio.And for the brooding bastard Don John, Whedon called up the only person to rival Denisof’s Wesley for my heart- Firefly’s heroic Dr. Simon Tam, saying “I need a sexy villain, what sayest thou?” (that’s a real quote, people. Straight from Sean Maher himself, whom I had the thrilling chance to interview at TIFF).

The film uses Shakespeare’s text and is in black and white but still somehow plays like the liveliest and most accessible romantic comedy this side of Love, Actually. Whedon, being Whedon, doesn’t shy away from the pieces of heartbreak, resentment and mistrust that lie within Shakespeare’s comedy, but that’s just good storytelling. He pulls at the heartstrings of the matter, twists them around until they’re funny again, then hands it all off to Alexis Denisof to make the whole thing positively gregarious with belly laughs. Denisof is a genius with physical comedy, which he pairs with the liveliest banter Shakespeare ever wrote and the heartbreak any Angel fan knows he can play so well, all reflected beautifully off of his greatest screen partner- Amy Acker. When I interviewed the sharp-witted and soft-spoken Acker a few years ago and asked her who she would love to work with again, out of any actor in the world, she didn’t hesitate a second before blurting out “Alexis!”, and she had good reason to.

The two are electric together- especially in Shakespeare’s most fun pairing- and they, along with Whedon’s insightful character interpretations, bring out so much in the characters that often gets overlooked.In fact the whole film is full of awesome little details that Whedon’s tweaked for his modern interpretation from the rollicking nature of the party to having a female Conrad (and therefore lots of lascivious villain cavorting!) . He also recruited the great BriTANicK boys for the itty bitty roles of The Watchmen (proving mostly that he has awesome YouTube taste). One of the biggest delights for me was actually Fran Kranz (considering that Denisof, Acker and Maher are all exactly as wonderful as I was expecting). I really like Fran Kranz– he was amazing in Dollhouse and the fantastic lynchpin of Cabin in the Woods– but I Never would have thought he could play a convincing Claudio. That character is all charm, romance, anger, and gullibility, while Kranz made his name on goofy roles heavy on rational thought and insightfulness. But that’s why Joss is just smarter than me, because he can see Romeo in Topher. I did not realize Kranz was dreamy; funny- yes, talented- absolutely, smart- obviously, but dreamy? Apparently YES! Mind Blown. And not only is he more than a little dreamy, he’s so fantastic in the controversial role that he makes Claudio a standout character for the first time possibly ever.