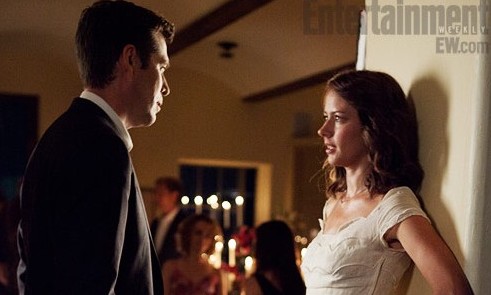 There are a lot of exciting films coming out in 2013 (here’s looking at you, Catching Fire!) but none of them have us as psyched as the impending release of Joss Whedon’s Much Ado About Nothing. The My Cinema staff is excited, the My Theatre staff is excited, the My TV staff is excited- the film, which finally hits wide release this Friday, is the combination of So Many of our favourite things (Shakespeare! Whedon! Denisof! Acker! Maher! Fillion! Kranz!). So our celebration will be four-fold, including THREE exclusive interviews and our review of the film from its world premiere at the Toronto International Film Festival.

Up first, we’re re-posting our Exclusive Interview with leading lady Amy Acker from just days after news of the film broke (Click Here to read our other interview with Amy where she talks about the Shakespeare readings that started it all).

Stay tuned leading up to Friday for Parts 2-4 of Much Ado-a-palooza!

Two days ago my facebook wall started lighting up with friends reporting the latest impossibly exciting story to reach well-rounded geek ears: that TV god/brilliant writer Joss Whedon had used his vacation time post-Avengers to adapt and shoot a new version of Shakespeare’s Much Ado About Nothing. I immediately dismissed the possibility- clearly someone was playing a trick on me. There’s no way one of my favourite cultural icons could have cast a squad of my favourite actors to produce a film version of one of my favourite plays ever written; there was no way it was true. But by the time the story hit EW.com yesterday there was no denying it- this thing was real.

Back in 2010, our fellow My Entertainment World branch, My TV featured an exclusive interview with My TV Award nominee Amy Acker. Now, Whedon’s newly minted Beatrice (Much Ado‘s word savvy leading lady) has graciously agreed to answer a handful of my giddiest questions about the film, the exceptional cast, working with Joss and the super quick and top-secret 12 day shoot that ended on Sunday.

When did Joss first mention to you that he wanted to a) film a new version of Much Ado and b) cast you as his leading lady?
Joss called and said he was making a movie of Much Ado About Nothing and that Alexis was in to play Benedick. I was already excited! Then when he asked if I wanted to play Beatrice, I really couldn’t think of anything I wanted to do more! Play an amazing part, and work with two of my favorite people!

How did the rest of the cast come together?
The rest of the cast is so incredible! Really if Joss asks, you wanna be a part of it! I was super psyched that Sean Maher was playing Don Jon because, well, he is so great, and I had just gotten to know- and love, him over the summer.
And Joss had gotten our hopes up that Clark Gregg was going to be in it- so we were all thrilled when it worked out! He is so great! And a super cool guy. One of my best friends, Emma Bates, who I moved out to LA with, and actually met doing a production of Much Ado, is also in it! Reed and Fran, who I knew from Dollhouse, and was so happy to get to work with them again! Nathan, Tom, geez, EVERYBODY was so good and all such wonderful people to be around. And Jillian, who Joss met on Avengers, and plays Hero, was just lovely! Oh and the guys from BriTanic, fantastic. Seriously, there is something amazing to say about everybody!

In our last interview I asked if there was any one co-star you could work with again, who would you pick. You chose Alexis Denisof. How was it re-teaming with your old Angel love interest to play the famous feuding lovers?
So, So awesome! I think Alexis is such a fantastic actor. I have always loved everything he has done, and love, love, love getting to be in scenes with him. Though this is not at all a Wes/ Fred relationship:)

In a recent interview with EW, Sean Maher said the Shakespearean verse proved pretty intimidating. How was it for you?
I really love this play. I mean anytime you get to say “clod of wayward marl” that’s a hit in my book!

From the pictures I’ve seen, the production looks fairly modern. What sort of interpretation is Joss bringing to the story and are you bringing to Beatrice in particular?
It is modern. We are all wearing our own clothes, for the most part, and there is lots of drinking! But I think since it is in black and white, it will feel sort of timeless.
As far as Beatrice, the whole idea of “grown up love” that Joss is talking about, made her more grounded and while there is still a lot of humor, some of her feelings about Benedick became more self realizations than proclamations. Which was different than I had always thought of it, but made a lot of sense. So that was cool.

Do you have any fun anecdotes from the top-secret set you can share?
Well, the police only came once:) totally fine everything was good, but I think they just wondered what the heck was going on….or they wanted to meet Nathan Fillion.

If this film does well, what are the chances we’ll get to see a whole Whedon series of Shakespearean films? I’d love to see your Cleopatra- wasn’t that the one that inspired Joss to kill Fred and create Illyria?
I sure hope so!