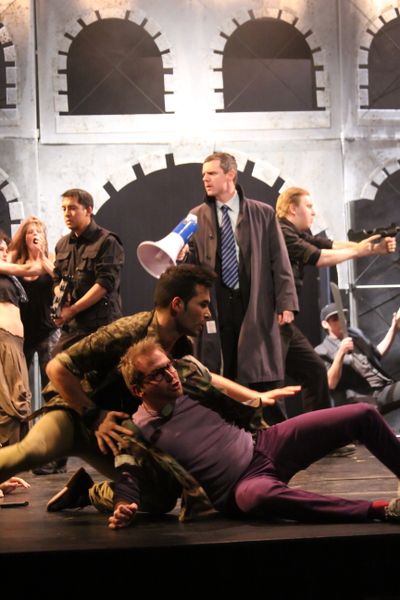 My dad does this thing that drives me crazy. I mean, my dad does countless things that drive me crazy, but this one drives me particularly crazy. Every time I ask him to see one of Shakespeare’s oft-produced masterpieces- like Romeo & Juliet, Macbeth, or King Lear– he says “I’ve seen it already”. Cue my utter exasperation. Shakespeare, perhaps more than any other subsection of theatrical work, is designed for repeat viewing. Seeing your fifth Macbeth is not like seeing A Few Good Men for the fifth time (not that I object to that experience either). It’s always changing. Yes the texts are rich with contrasting themes and the characters complex enough to play fifty different ways, but on a very practical level, Shakespeare’s plays are long and old so directors are always having to cut and interpret things in order to translate a universal work into something their then-and-there audience will get the most out of. Any given line of a Shakespeare play is hardly ever staged without at least 4 sets of interpreting eyes between the man who wrote the words and the brain that’s processing them from the audience. The story remains largely the same, the unalterably famous passages left mostly in tact, but Romeo & Juliet is never just Romeo & Juliet. So even though I’ve seen countless versions of Shakespeare’s ubiquitous but (I’d still argue) underrated tragedy and can recite great swaths of the text by memory, when I walked into Hart House for their recent production I did so with the understanding that I hadn’t seen this before.

What I had seen before was the work of director Jeremy Hutton and leading man Paolo Santalucia- both together and apart- and both delivered as expected. For Hutton’s part, that meant modernization (always a good thing in my book when it comes to Shakespeare, especially a story as urgent as R&J’s), strong physicality (his fight choreography rarely disappoints), plenty of thoughtful and fresh choices, and slight Darren Nichols-esque qualities (there’s generally a moment or two when his dedication to invention goes too far; here it’s most glaring in Act One, Scene Two when Lord Capulet conducts a meeting in an accidentally hilarious strip club). Hutton’s a smart artist with a ton of great ideas, but at Hart House where he is not only director, fight director and sound designer but also Artistic Director, he needs someone else with the authority and guts to make sure he’s not using every idea he’s got all at once.

Santalucia’s Romeo was, like Hutton’s direction, right on the mark of what I was expecting from him. Unlike Hutton, however, that’s less of a mixed bag and more of an allround good thing. TYT alumnus Santalucia emerged a few months ago from Soulpepper’s incomparable 2 year Academy armed to exceed every expectation I’d had of him before he went in. After his standout performance in The Royal Comedians, I was expecting a really good Romeo out of him (and those are high expectations in a role that is at least ten times harder than it seems), and Santalucia delivered seemingly effortlessly. He mastered the boyish charm, the goldenboy attitude, the temper, the rashness, the lovestruck idiocy, the poetic sophistication, the utter hopelessness, the steady compassion, and the death-by-poison, any and all of which have tripped up thousands of Romeos before him. There are two big things that need to be said after seeing Santalucia conquer Romeo as well as he did; they are “all hail Toronto’s new young leading man” and “all hail Soulpepper Academy”.

If there was fault to be found with Santalucia’s Romeo- and, as you all know, I can always find fault- it lay in the chemistry with his Juliet. It wasn’t bad or, worse, altogether missing, but- and I’m going to get demanding for a minute- it needed to be better. It needed to be fire-y. If I’m going to buy Romeo & Juliet as a love story and not as a cautionary tale about dumb kids, their chemistry needs to make me blush. Especially when dealing with a titular pair both solidly in their mid-twenties and thus without the benefit of innocent ignorance, Romeo and Juliet’s needs to be a love literally worth dying for, or the audience is likely to dismiss the characters as silly. I’m not saying I did dismiss these two as silly, but I certainly wondered how Darwin Lyons’ otherwise mature, almost cerebral Juliet wasn’t talking herself out of every plot point. Objectively love-worthy as he was, I’m not sure her Juliet’s love for Santalucia’s Romeo read as inarguable enough to shout down her own sensibleness. Now, you can blame that on him, you can blame that on her, on the casting, on the direction, on Eric Finlayson’s likable Paris- who was refreshingly allowed not only the benefit of not having his part drastically cut but the benefit of not being directed as a) sleazy, b) dimwitted or c) immeasurably dull- but whomever you blame it on, there was magic missing. I’m a big advocate against the simplification of Paris and I think it makes everything much more fascinatingly complicated the nicer he’s allowed to be (because it humanizes Lord Capulet, because it takes the title characters off their pedestals, because it raises the stakes for the Prince, and everyone else, in Act Five), but in this production with a Romeo and Juliet who were decently likable to varying degrees on their own but less clearcut as soulmates, it might have been necessary to throw that character under the bus for the sake of the stars.

Interestingly, considering that Paris was given his good guy due, Jess Phillips’ Lord Capulet was all 3.5 and very little 4.5. To explain my nerdiness- Act Three, Scene Five is the absolutely genius, outrageously multi-faceted scene that encompasses Romeo’s final goodbye to Juliet before he leaves for exile, Lady Capulet’s moral tug-of-war between her roles as mother and wife, The Nurse’s betrayal in abandoning the romantic ideal of Romeo to recommend Juliet move on with her life, and, most importantly, Lord Capulet’s profanity-laced, hateful tirade against his daughter when she tells him she refuses to marry Paris.

It’s a terrifying, heartbreaking, and viscerally frustrating scene that reveals all the darkest corners of the Capulet family, and it stands in fascinating contrast with Act Four, Scene Five when all the same characters reconvene on the stage as they discover Juliet’s lifeless body. The latter scene is full of genuine remorse and love, revealing all that Juliet had to live for in a non-Romeo sense, even after suffering what she does only one act previous. Like most non-titular characters in Romeo & Juliet, Lord Capulet has the material to make him uniquely complex but it’s often glossed over in favour of 3.5’s theatrics. Phillips fell into that all-too common trap with his Lord Capulet, with Kelly Bolt’s Lady Cap not far behind him. Lesley Robertson, however, did a wonderful job playing all the diverse notes of The Nurse , shining perhaps a bit more brightly in the drama than the slightly repetitive comedy but averaging out to be quite winning. Scott Moore made a fine and intriguingly skittish Friar- one of the only roles Hutton cut much material from, not much of it missed (I would make the case that Friar John’s monologue is key but who cares?)- and Cameron Laurie stood out in the comic gold role of Peter and, more impressively, in the show-opening and easily overlooked part of Capulet ruffian Gregory.

Now that you’ve made it 1,200 words into this review, I’m going to make you try and remember the point that started it all- there are no two Romeo & Juliets alike. And, nitpick as I have, I haven’t actually landed on what I think was the main distinguishing factor of this particular one. Steel yourselves… ready? It was Benvolio. “Benvolio?” I know you’re all asking, “but, Kelly, isn’t Benvolio the niceguy sidekick who no one ever remembers because he spends all his time wedged between dreamy Romeo and show-stealing Mercutio?”. You’re right, he is. And that’s what made Jeremy LaPalme’s Benvolio so notable, that he was notable. He didn’t out-act Santalucia (who is, frankly, above Hart House at this point in his career) and it’s not as if Joshua Browne was a substandard Mercutio (in fact, I really liked his sexually deviant scamp of a Mercutio. He mixed the character’s oft-forgotten-about good breeding with his never-forgotten-about sense of rebellion in one of the production’s most refined performances).

I’m not actually sure what it was about LaPalme that made me immediately not only like but pay attention to his Benvolio, but it was effective. He had a hipster edge that put him almost stylistically above the frey of the other characters’ rougher hip-hop and rock-infused exteriors. Benvolio is one of the only characters in the story with any foresight or a real sense of perspective on the feud (he doesn’t manage to stay out of it, but he at least can see trouble coming) so little nods to his over-it attitude were massively effective (he was wearing purple pants- kudos to designer Brandon Kleiman on somehow knowing that would work). LaPalme was funnier and less milquetoast than most Benvolios, more willing to go toe-to-toe with his flashier comrades in a battle of wits and an almost mocking counterpoint to Johnathan Sousa’s deathly serious John Leguizamo homage of a Tybalt.

Everyone in every production does Something I can’t anticipate, whether it’s a quirky line reading, a way of holding their hands, or the emphasis of an adjective I hadn’t thought was all that character-defining. But LaPalme made a character I thought I knew well into someone entirely new for me, and in doing so he redefined half the relationships in a play I know backwards and forewards but would never presume to know entirely. You can never tell me you’ve “already seen” Romeo & Juliet, because until you’ve seen it through the eyes of every director and actor and dramaturg and designer in the world, you haven’t seen all it’s got.