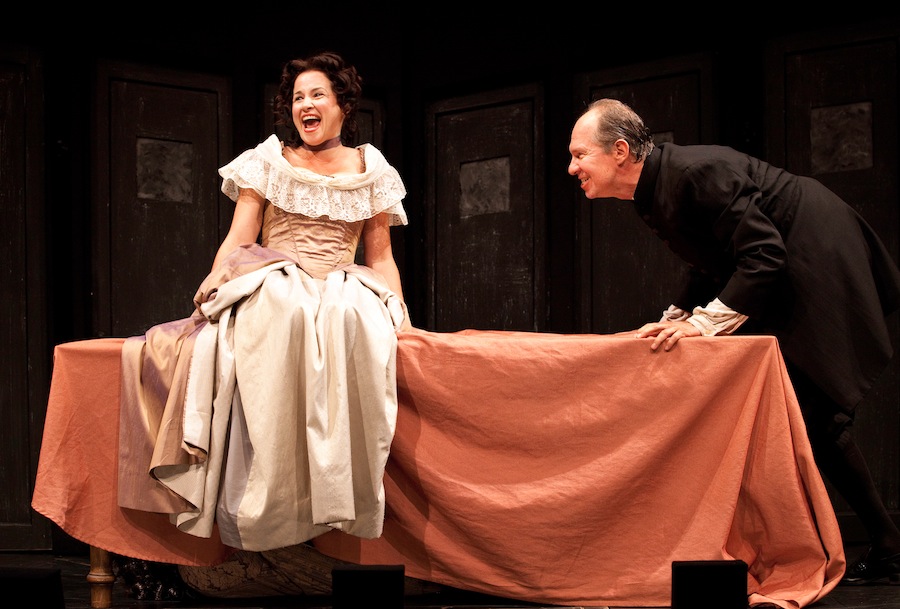 As directed by Laszlo Marton and featuring the Academy members alongside Soulpepper vets, The Royal Comedians is fine. It’s nowhere near the company’s best work but it has some moments of greatness.

Bulgakov’s text is not unlike the production’s repertory fellow The Crucible in that it’s a historical parallel to the author’s contemporary struggles. In Albert Schultz’s take on The Crucible, the McCarthyism subtext is just that- subtext- and enriches the action on stage without interfering with it. Marton, in contrast, makes the oppression of Josef Stalin’s regime (under which Bolgakov was both protected and banned) an explicit frame around Moliere’s similar struggles in the court of Louis XIV. On one hand, I appreciate that when faced with comparable texts in rep Marton made an effort to differentiate in approach. That said, the choice strips the subtlety from Bulgakov’s already melodramatic text and makes it scarier but less intellectual and far less complex when it comes to the antagonists.

Bulgakov includes a few very long passages from Moliere’s most famous plays. Most notably, Tartuffe is staged by Moliere (Diego Matamoros) and his players amidst accusations that it’s heresy. I would normally say that these passages should be dramatically cut down since they interrupt the flow of the story, but when the uneven execution of Bulgakov’s text gave way to the expert execution of Moliere’s I wished for more Tartuffe and less Royal Comedians. Diego Matamoros is particularly great as the predatory title character in the Tartuffe segments, but less convincing as Moliere himself. One of Soulpepper’s franchise players, Matamoros is a better comedian than Bulgakov’s text allows him to be and a more sincere dramatist than he appears here, whereas he would be excellently cast in the full Tartuffe. However, if this were just Moliere instead of Moliere via Bulgakov, we’d be robbed of Gregory Prest‘s sensational Louis XIV. It may even be a problem, how captivating and humanizing and offbeat-amusing Prest’s take on the King is. Bulgakov’s text is autobiographical at its heart and while it does acknowledge that Stalin protected the writer it is ultimately a criticism of censorship and abuse of power. Louis is Stalin’s proxy in the play, but I made my way out of the theatre on his side, or at least acknowledging his conflicted humanity and understanding his point of view far more than I think Bulgakov wanted me to. Even My Theatre’s NY writer, seeing Prest for the first time*, remarked that his performance stood head and shoulders above the rest, to the point where his Louis might belong in a different play altogether.

The Academy members in the cast are similarly a mixed bag. Sarah Koehn is a bit of a let down as Armande (the centrepiece to a yucky subplot) but Daniel Williston stands out as The Honest Cobbler and Qasim Khan brings remarkable pathos despite his tiny role. The best from the academy in this production is definitely Paolo Santalucia. Given a pretty big part for a newbie, Santalucia is nothing short of winning as Zacharie Moirron- a scamp, a lover, an ego, a rat, a guilt ridden loyal son. The Royal Comedians (C+) and The Crucible (B+) are the Academy showcases this summer and judging by the performance I’ve seen I’d say Santalucia and Hannah Miller (Abigail in The Crucible) are the breakout stars of the current crop who you can count on seeing a lot more from in the future.

*I mention her reaction because Prest is my unequivocal favourite Soulpepper actor and regular readers know that, so I wanted to prove his objective amazingness here in case you didn’t believe me.