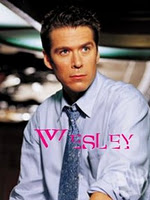 The Top 20 Characters of the Buffy/Angel-verse

I’ve just finished watching the entire series of Angel on DVD. Now that my consumption of the Buffycannon is complete I feel a little analysis is necessary. The best way I can think to do this is to analyse by character (my favourite aspect of the two spectacular shows). And thus I give you my run down of the 20 best characters in Joss Whedon’s fantasy universe of vampires and slayers:

In every incarnation (the goofy failure of a watcher we meet in Buffy’s third season, the wounded loner of Angel’s fourth season or the romantic martyr in Angel’s series finale), Wesley is the most engaging and multi-faceted character in the Buffy/Angel-verse. Played perfectly by the incomparable Alexis Denisof, Wesley’s journey was that of brave defiance, tragic heartbreak, incredible longing, fierce loyalty and unparallelled growth. His flaws only make him stronger, more sympathetic and human.

Like many brilliant characters, Anyanka was supposed to be a small part, but when Joss realized how very interesting the vengeance demon now trapped in a teenage life was she transitioned into a permanent member of Buffy’s scoobie gang. In fact, she become the most entertaining and interesting character in the lot. Unused to being human, the newly re-named Anya’s adjustment to mortal life was at times bumpy but always intriguing and poignant. Everything from her hilariously literal interpretations of things to her lack of understanding of customs to her beautifully innocent love for Xander to her resolution to fight alongside her friends and her eventual death make Anya, the former demon, one of the most human characters there is.

Like Anya, Spike was simply a villain, brought in to cause some havoc in Sunnydale then scuttle out of the way like any other big bad. Thank God that’s not what happened because without Spike, Buffy (and later Angel) would not have been the same series. This British bad ass not only gave us some amazing fight scenes and a good deal of the best one liners in TV history, he also had possibly the most pronounced character arc ever. His transition from rebellious villain to neutered love-lorn puppy to soulful and selfless hero is pure writing and performance genius and makes Spike one of the most popular television characters ever, and most rightly so.

When executive producer David Greenwalt insisted on bringing the sunny and superficial Cordelia over to Angel after her graduation from Sunnydale High he couldn’t have been making a better decision. On Angel Cordelia blossomed from the sometimes sweet and always funny spoiled princess into the moral centre of a group of true heroes. When the true Cordelia made her exit at the end of Angel’s third season (later to appear only as a divine manifestation or possessed by an evil spirit) she was a completely different girl than the one she’d been 6 years earlier on Buffy. She was smart, independent, caring, strong, loyal, down to earth and heroic. Cordy kept Angel inspired, Gunn in line, Wesley sane and Fred brave and in doing so saved the world, even after she had left it far behind.

Everything from crazy in a cave to the elegant object of multiple men’s desire to the tough and ingenious head of Wolfram & Hart’s science division, Fred transformed on a daily basis, never losing the innocent sweetness that made her so unique in the first place. The brilliance that is the beautiful Amy Acker’s superb talent can’t be challenged once you see her play all these parts rolled into one superbly lovely character AND the intense other worldly goddess who takes over Fred’s body in Angel’s final season. With a unique turn of phrase and an incomparable capacity for empathy, Fred is such a wonderful character that when she’s in danger all Angel has to say to rally the troupes to save her is “Winifred Burkle”.

Buffy’s best friend and saviour of the world many timesover, Willow is a fan favourite in the Buffyverse. Her independent spirit, sunny outlook, innocent and trusting nature and fierce intelligence and

magical ability make Willow one of the most endearing and coolest characters out there. Too cool, in fact, for the cool kids. Oh, and did I mention she turned evil when the love of her life was killed? If we’re talking intense emotion Willow’s got it. And if we’re talking meaningful relationships with other characters, Xander saved the world with his love for Willow so clearly she’s got the meaningful connection thing down as well.

The meanest vamp on the block, Darla defined the sexy villainess, sending Angel reeling with her very presence. After her premature death on Buffy, Darla’s reappearance at the end of a somewhat dreary first season of Angel infused the show with an intense energy that she carried with her until her triumphant self-sacrificing death in season 3. In fact, Darla’sdeath to save her unborn child from her own soul-less self was perhaps the most meaningful death on the show.

In the grand tradition of Whedon characters who spend time being ultimate heroes AND ultimate villains, Faith is pretty close to the top of the list of the best of both worlds. Her descent into villainy with the Mayor in season 3 of Buffy, her redemption in season 4 of Buffy and season 1 of Angel and her reappearance to save the world twice over in the space of a couple weeks in season 4 of Angel and 7 of Buffy make for some of the most memorable episodes of both shows. This bad ass slayer is one of the verse’s coolest characters, walking the line between good and

evil and seeking redemption for her sins.

Joss Whedon says that when he wrote the character of Oz he wanted to write a character who was “so cool he could see how cool Willow was” and he did. Oz may have turned into a gigantic fanged beast every full moon but the rest of the time he was the definition of cool; the kind of cool that is so cool it can make anything cool and has no need to be cool.

and speaking of cool. Gunn is cool, even when he’s singing “three little maids from school”. With a big brain and an even bigger heart, the “muscle” of Angel’s crew proved that he was more than he seemed. Who wouldn’tswoon over how far he would go for his love for Fred? and when Gunn screwed uphe wouldn’t rest until he’d atoned for his actions; his sense of justice was incomparable.

Buffy’s father figure was more than just the exposition man. He was the group’s guide post and source of strength. Giles’ own tumultuous past informed every decision he made from murdering human Ben in order to rid the world of evil Glory to cautioning Willow against relying too heavily on magic to leaving Buffy so that she could learn to stand on her own.

The sidekick, the third wheel, the moral support, Xander may have been the only scoobie with nothing supernatural to offer the group but his incredibly relatable character gave viewers a way into the

show. He was the ‘everyman’ in extraordinary circumstances but his love for the people around him was in itself so noteworthy that his otherwise unimpressive character became somewhat remarkable.

Less remarkable for his own somewhat tedious mythology and more notable for what he meant to other characters, the presence of Angel in both shows was central to the development of almost everyone. His relationships with Cordelia and Wesley were some of the most meaningful in the verse and Buffy’s sacrificing her own happiness with him and killing him in order to save the world revealed more about the nature of sacrifice and her destiny as the slayer than even her sacrificial suicide in season 5.

She had to make the list somewhere. Even though I find the supporting characters far more engaging than either Buffy or Angel, it must be acknowledged that they are the centre of their shows and without their stories there would be nothing to tell. Buffy kicked butt. She inspired others, and saved the world even when wallowing in self
pity, and she did it in high fashion while spouting clever comments.

Hahahahaha. Thatis all that needs to be said about Andrew. In a season (Buffy season 6) filled with misery and brooding, Andrew and his cohorts lifted the series back into the realm of lighthearted with their turn as the season’s “big bads”. Returning as one of the “good guys” in season 7, Andrew provided the expected comic relief and came through with the occasional incredibly touching moment such as his scene in the hospital with Anya and his recounting her death to a heartbroken Xander.

It wasn’t until she was killed at her high school graduation that Harmony was finally released from her constraining role as Cordelia’s sidekick and allowed to become the hilarious character she was. As a vampire, Harmony returned on Buffy and Angel as the most comically clueless vampire there ever was, a bizarre love interest for Spike and a surprisingly good (if somewhat untrustworthy) assistant to Angel. Promoted to regular cast
member for the final season of Angel, Harmony added some much needed girly spunk to the mix in the absence of Cordelia.

Love lesbian Willow or hate her, the Willow and Tara relationship was beautiful. Tara brought out a brilliant strength in Willow and Willow’s presence in Tara’s life gave her the sense of self to stop hiding in the shadows.

This crazy vampire’s relationship with Spike solidified within the verse’s mythology that soulless vampires can, in fact, feel love. She played a crucial role in the dynamic of the core four vampires and their familial hierarchy (Darla sired Angel who sired Dru who sired Spike), and her insane amounts of crazy not only made Dru interesting, they also made her intensely scary as the unhinged villainess loose on Sunnydale and LA throughout both series.

and last but not least, the host of the infamous karaoke bar on Ange lost some of his pizazz when he became an everyday player, but Lorne’s special sparkle still deserves to make the list. His unique ability to read people when they open their hearts to sing was a fascinating plot and character device while the addition of details of his family life in Pylea added depth to the character. Lorne was always quick with the one liners and could always be counted on for a fun (if slightly condescending) nickname for Angel, making him a great addition to the show.