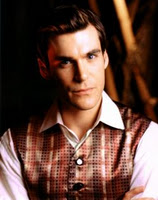 So I’ve only just realized that I completely forgot to post my obsessions of the week. Sorry.

Tonight I’m watching a Firefly marathon, finally finishing the series. So, a little late, here are my Firefly-themed obsessions.

Simon Tam
How is it possible NOT to be in love with this guy? He’s smart and noble and funny (unintentionally perhaps), he’s awkward and endearingly proper and the way he takes care of his sister- downright heroic.

Summer Glau
River’s a cool character but Summer Glau’s performance in the role is what really impresses me here. She’s intense and odd and sometimes even a little scary but she also has these incredibly tender moments of sweetness or silliness or innocence and sometimes all of it at once. The girl is a revelation.

Mal Reynolds
Hands down, no questions asked the coolest of all Whedon’s heroes, possibly even the coolest TV hero ever. Mal is a fascinating combination of… no wait, he’s too complicated to use adjectives. Let’s just say he’s freaking cool.

and, last but most certainly not least,

Nathan Fillion
It takes serious chops to play a character with as many levels as Mal Reynolds and Fillion hits it out of the park every time. Not to mention, he seems like a really awesome dude in interviews and commentaries. And then there’s Dr. Horrible’s Sing Along Blog (the DVD of which is coming out soon),  in which he plays a narcissistic hero/antagonist. He sings, he swaggers, he’s fantastically self deprecating- what could be better?