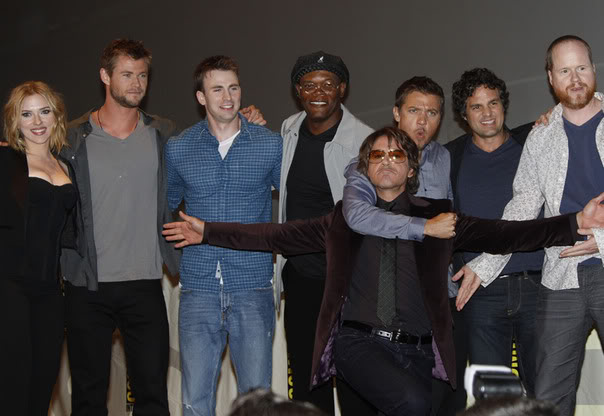 The Avengers, an early review

It’s finally here, that big colossal movie that brings all the heroes from the past half a dozen Marvel films together for one epic motion picture. This is the project Marvel fans have been dying to see come to light ever since Samuel L. Jackson made his first cameo in the original Iron Man. When he stood there in Stark’s house and informed him that he was there to speak to him about the ‘Avenger’ initiative, that got a huge pop from the audience that was still there to see the small snippet after the credits had finished rolling. I liked the idea, but at that moment when watching Iron Man, I had assumed this was just something that would only be explored in future Iron Man sequels. I was proven wrong at the end of The Incredible Hulk when Robert Downey Jr. made a cameo of his own at the end of that film, and I started to believe that they were really serious about making a real Avenger movie.

When watching these cameo scenes at the end of each film, I remember sitting in my local theatre thinking that it would take a lot of balls to pull off a film like The Avengers. I also remember thinking it would take a very gusty director to want to take on this project and all the heroes that could possibly be involved. Turns out, Marvel Studios found the perfect director to take on this project when they hired Joss Whedon (who also co-wrote the script).

I’m a huge fan of the Whedon-produced Firefly and the brilliant film based on it called Serenity, and when watching The Avengers, I could see Whedon’s fingerprints all over it- from the small quirky moments that each hero has as the film goes on (no spoilers here) to the easy flow of the film’s action scenes. Even the villain seems more believable in the hands of a great writer and director. To the fans who are worried that The Avengers is too big to live up to expectations, fear not. Not only did The Avengers live up to my bloated expectations, it exceeded them by a mile and is one of the best movies I have seen so far in 2012. Joss Whedon has delivered a masterpiece of character development and action. The film even progresses the story ahead nicely going forward for the next several action sequels. I walked out of the theatre not only eager to see another Avenger movie, but eager to watch other movies based on the characters in the initiative.

The cast, it goes without saying, is incredibly impressive, especially when working together. Sure there are some scenes when it doesn’t look like the screen will be big enough to hold everyone, but the actors really  do mesh very well together. In the comics and the animated series, The Avengers are a very dysfunctional group, only really gelling together when it all hits the fan. That dysfunction is carried to the screen and looks just as good here in the Avengers film. Our heroes don’t get along very well in the beginning and it’s fun to watch them joust amongst one another, whether physically or verbally. Watching all the heroes from the previous films like Iron Man (Robert Downey Jr.), Captain America (Chris Evans) and Thor (Chris Hemsworth) on the same screen is pretty awesome, as is the return of SHEILD’s assassins in Black Widow (Scarlett Johansson) and Hawkeye (Jeremy Renner) who had appeared in previous Marvel films. Yet what really gels this film together are the supporting actors within the SHEILD organization. Samuel L. Jackson as Nick Fury returns along with of Agent Coulson (Clark Gregg), but are this time joined by another scene stealing SHIELD agent named Maria Hill (Cobie Smulders, aka Robin from How I Met Your Mother). Agent Hill is a stand out in The Avengers, giving me the impression that her character will be a major player in future Marvel productions.

The role amongst the heroes that stand out for me the most was Bruce Banner, recast for a third time but played brilliantly by Mark Ruffalo. The approach Ruffalo and Whedon use with this version of the Hulk is so impressive that I hope Marvel Studios seriously considers making another Hulk film with Ruffalo. For the first time, Hulk’s true destructive force is finally used to his full potential on screen. The green monster’s power and rage truly makes him the most powerful and dangerous member of the Avengers, just as he is in the original comics. When Stark brags about the fact that he has ‘a hulk’ in his arsenal, it’s not an idol threat as the Hulk does an insane amount of damage in this movie in just a short period of time. No one is safe when the Hulk goes into a rage, not even his own teammates.

Despite the Hulk’s scene stealing presence, all the superheroes in the film are given a fair amount of time to build on the character that they established in previous films. Fans of each film are going to leave The Avengers satisfied that their favourite hero was given a good amount of time to reveal new details and cool hints to what we can expect in that character’s upcoming sequels.

Now we come to the villain of this film, which comes in the form of Loki. Thor’s younger ‘adopted’ brother plans to use a burrowed alien army to take over the earth and make it his own kingdom. Prior to seeing this film, I had some heated debates with some people who were disappointed that a villain we’ve already seen was being used for the first Avengers film. I actually thought that was the best villain to use, because if you’ve seen Thor then you don’t need to waste time in this movie introducing the villain and use 20 minutes for his origin story. To see where Loki is coming from, all we need is two flashback scenes that barely take up five minutes, saving the rest of the time for the people we really want to watch.

In order to watch this movie, however, you must do some homework. If you haven’t seen Iron Man 1 and 2, Thor or Captain America prior to watching The Avengers… you’ll be missing some serious intel and be lost when trying to find out what’s going on. Watching The Incredible Hulk would also provide some good background, but it’s not required since The Avengers does a good job filling in the blanks of the Bruce Banner character.

There are scenes in this film (some very funny) when you know Whedon is having a lot of fun with these characters- the petty comments, the witty returns. It’s all good fun, which makes The Avengers the early front runner for the best film of the Summer, if not the entire year. Joss Whedon takes on an enormous project and returns with pure cinematic gold. This movie is all that and then some, exceeding all expectations and delivering on an epic scale. I really hope that Marvel seriously considers not only allowing Whedon to direct the next Avengers film, but to helm some other Marvel projects in between. He did such an amazing job on a film that I thought would be too difficult for any director and came back with a genuine winner. In all, The Avengers is everything you would want from a summer blockbuster and more. It has all the action you could want but oodles of character development and story progression to keep any fan fully satisfied. The Avengers is definitely worth checking out in theatres, especially in IMAX if you have the chance to do so in your area. It will possibly be the best movie going experience you have this summer.