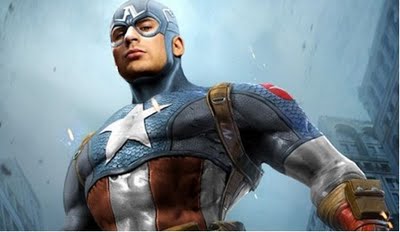 Captain America, the set up

Watching Captain America feels a whole lot like watching a so-so pilot episode for a TV show you really want to watch. In there are all the elements that you know you’re one day going to love (more on that later), but the actual substance of the episode seems more about putting the pieces in place for the show to come than it is about what’s actually going on.

Part of this is inevitable. In establishing the head of their Avengers franchise, Marvel decided to go back in time to do the Captain’s Nazi-fighting origin story. By necessity then, the film follows characters that are almost all dead by the time of the main action of the Avengers- a love interest that will not be seen again, and villains who have no real importance. Plus, almost half the film is spent with a scrawny, CGI’ed dude who looks vaguely like Captain America, and certainly has a lot of spunk, but who doesn’t really exist. WE all know he’ll get super serum’ed, turn into a super hero, crash land his plane in the arctic, and wake up to help an eye-patched Samuel L Jackson assemble a team.

Despite the fact that this movie is largely about putting the last piece into the Avengers puzzle, the film doesnt’t have to feel so perfunctory. It has a great star in Chris Evans (the best thing about the awful Fantastic Four films); it has a cool setting and cool aesthetic in WWII-era USA and Germany; and it has a cool message of courage, patriotism and good nature overcoming greed, power, and bullies.
But ultimately the final film is surprisingly lifeless.

I wonder if this is partially due to the fact that the director, Joe Johnston, isn’t the big presence that, say, Jon Favreau or Kenneth Branagh is. He certainly makes serviceable action movies and historical epics (October Sky, Hidalgo, The Rocketeer) but he lacks the panache and style of those other directors. He lacks their viewpoint. Because of this, although there’s nothing really wrong with it, Captain America feels fairly paint by numbers. There are traces of humor and style there, but nothing that really brings the whole film together.

When it comes down to it, movies are not TV shows. While we happily forgive a pilot episode for merely moving the pieces into place for the show that will follow, it’s more frustrating when it’s a movie.

Still, color me intrigued for where the Captain will go once he breaks out of his sepia tones and into the blaring lights of the 2011 New York skyscape.