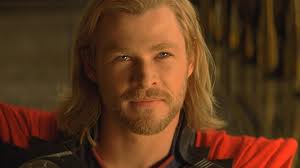 The God of Thunder

Rachael is the superhero expert, I freely admit that. When it comes to genre knowledge, franchise history and source material familiarity- I’m not your girl, at least not when we’re talking Marvel vs. DC (or whatever it is we’re talking). But I’ve seen my fair share of hero movies. Like everyone, I’m a Batman fan and hold The Dark Knight in the highest regard. I liked the first Spiderman and all three X-Men (the first one publicly, the second 2 not so much), even Iron Man impressed me (though I didn’t see the sequel). So I’m going to talk about Thor. If you think that I am wrong about Thor, let me have it in the comments section, because I freely admit that I’m not on my own turf here.

But here we go nevertheless…

Shakespeare’s modern right hand man Kenneth Branagh is not who you’d expect to be at the helm of a summer blockbuster; but for me and mine, that was hardly a deterrent. The erstwhile Henry V could be counted on to bring gravitas to the hero’s mythology; the man behind one of the world’s more famous Hamlets should know what it means to ground an epic story in the personal without losing its scope; a wonderful Benedick has the skills to balance comedy and drama without losing either. And for the most part, Branagh did exactly what was expected of him. His Thor strikes that balance of big and small- tiny personal stories with literal intergalactic consequences. It doesn’t take itself too seriously, making for some genuinely funny moments and the age old mythology is handled with respect- shining lanterns on the sillier stuff and really playing out the more consequential.

The CGI is astounding, the sort of stuff film buffs couldn’t have dreamed of 10 years ago… 5 even. But the development of world-creating technology is a double edged sword. As beautiful as that rainbow bridge is and as wonderfully sprawling as Asgard appears, I can’t help but long for the days when people actually built stuff; when hobbits had to spend 3 hours in the makeup trailer getting hair put on their feet and you actually needed to hire 400 extras to play 400 people; when set dressers were as important as computer animators and prosthetic makeup artists created the allusion by hand. There’s a palpability to effects like that, something that simply can’t be created with a green screen and stop motion suits. But if you let yourself get sucked into its computer-generated galaxy, Thor is a beautiful film, particularly when it lives in Asgard, a gorgeous CGI kingdom ruled by Anthony Hopkins, threatened by Colm Feore and connected to our world via rainbow.

As for the film’s version of earth, that’s sort of a mixed bag. While supporting players like Stellan Skarsgard and Kat Dennings ground the action (Dennings, especially, is wonderfully witty), leading lady Natalie Portman is the most absurd astro-physicist I’ve ever seen: she’s giggly and girly and not nearly steady enough on her feet to have accomplished the things the film insists she’s accomplished. With little more than a rushed and unbelievable relationship to play, the character of Jane in general proves a quick flub.

The rest of the earth-bound plot is pretty flimsy too, though it’s always a thrill to see the wonderful Clark Gregg tying the various Avenger films together with his cool Agent Coulson (Jeremy Renner’s also got a blink-and-you’ll-miss-it cameo previewing his Avengers role and there’s a great Tony Stark shoutout thrown in).

As for Thor himself, Chris Hemsworth is properly imposing and thusly threatening. He pulls off arrogance well and his comic timing is superb in such wonderful deadpan moments as “this mortal form grows weak, I require sustenance!” But in general, and this is, on the grand scale of problems, a good problem to have, I think he’s a bit too charming. There are many moments throughout the film when he’ll flash that insane smile of his, his shockingly blue eyes will twinkle and he’ll deliver one of the script’s more inconsistent colloquialisms with the ease of the best romantic comedy leading man. Moments like these certainly solidify whose side you’re supposed to be on but they also take away from his primitive complexity, his imposing grandeur and his requisite broody superhero-ness.

The best actor in the film is without a doubt Tom Hiddleston as Thor’s ambitious brother Loki. He’s confusingly endearing and frustratingly detached, cold and warm at the same time, a pitiable outsider and a bully, a little brother with an inferiority complex and a senseless villain. He’s easily the most interesting character and in the hands of Hiddleston he’s enthralling to watch. The script, however, plays fast and loose with his character, overloading on the inconsistencies far past the point of complexity and firmly into undermining territory. Much like in Thor the story, the real tragedy of Thor the film is that Loki is but a shadow of what he could have been.

The script and pacing issues continue from there– the dialogue is all over the place in style, the characters generally underdeveloped and the first act about 3 times longer than it should be.

But, ultimately, Thor is fun, so you don’t really care that much. It’s pretty (from the rainbow bridge to Chris Hemsworth’s smile) and silly (why is Loki dressed like a giant insect? why?) and sometimes kinda cool (Idris Elba’s Heimdall is badass and who doesn’t love a villainous Colm Feore?!). So what’s not to like, really?