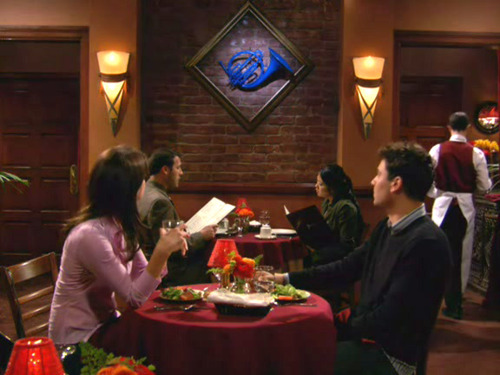 The Curious Case of Ted & Robin

How I Met Your Mother devotees cried foul last week when their favourite heartfelt sitcom ended on a cliffhanger of wife-searcher Ted proclaiming his love, once again, to Robin, his recurring ex-come-Barney’s soulmate. It seemed like retreading of the most tired of territory, like desperate procrastination on the high-pressure “mother” introduction, like a distraction that would undermine the ever-fascinating Robin/Barney relationship. But any of those fans who thought to themselves “you know what, Craig and Carter haven’t led me too far astray in the 7 years they’ve been running this show, maybe I should give them my trust, just for this week” tuned in tonight to find an episode that dealt with said revelation with sharp-witted dignity, full self awareness and heartbreaking honesty.

Not since the season 3 ender that started to make good on the seeds planted as early as season one’s  brilliant “Zip Zip Zip”, in which they hung out as “bros”, has anyone been rooting for Robin to be with Ted instead of Barney (well, except maybe Marshall). It’s been long-established that she’s not the mother (literally since the pilot) and the safe assumption is that she is the “mystery” bride at the wedding we keep getting little glimpses of (Barney’s wedding), so revisiting the Ted/Robin relationship feels like a waste of time. But what this episode did was finally put the last nail in that coffin that for years Ted’s been pretending they hadn’t built. It was much-needed closure. By reopening the issue, Ted was able to air the last of his feelings and close the door on Robin. The episode ended with a world full of yellow umbrellas, a nod to fans that Ted is finally in the right place to meet the titular mystery.

On the way to the ultimately optimistic ending, we learned that Marshall and Lily keep a box of “long-term bets” under their bed, one of which is “Lily bets Marshall that Ted and Robin don’t end up together”. This great subplot (which involved Barney’s elaborate search for a Marshall/Lily sex tape) was perfectly linked to the A plot in one of the most cohesive episodes the series has ever done. Barney detoured from said subplot just long enough for a particularly superb scene in which Ted asks him about his feelings for Robin after revealing that she broke up with Kevin. Retelling the heartbreaking story from earlier this season about his breakup with Nora and Robin’s decision to stay with Kevin, Barney broke his comic shield just long enough to say that that decision shut the door on them, calling her breakup with Kevin a “bummer” and nothing more. The subtlety of the moment from Neil Patrick Harris was awesome, earning him the performance-of-the-night award, except that the amazing Cobie Smulders steamrolled him with her tragic confession that she doesn’t love Ted. No matter how convincing he might have been, Barney’s simply not right about them.

In fact, that whole cast was at the top of their game tonight, and that’s no slouch of a cast. Jason Segel held down a remarkable moment of maturity for Marshall when he asked Robin to move out and Josh Radnor did his best work in years as Ted grasped at straws and attempted to pretend everything was no big deal. It was a fantastic episode full of character honesty and the relationship consistency of the best serialized shows. By closing the door with appropriate finality on the founding chapter of Ted’s romantic story, the show set its sights on the future, even if Marshall’s “not yet” convinced it’s really over.