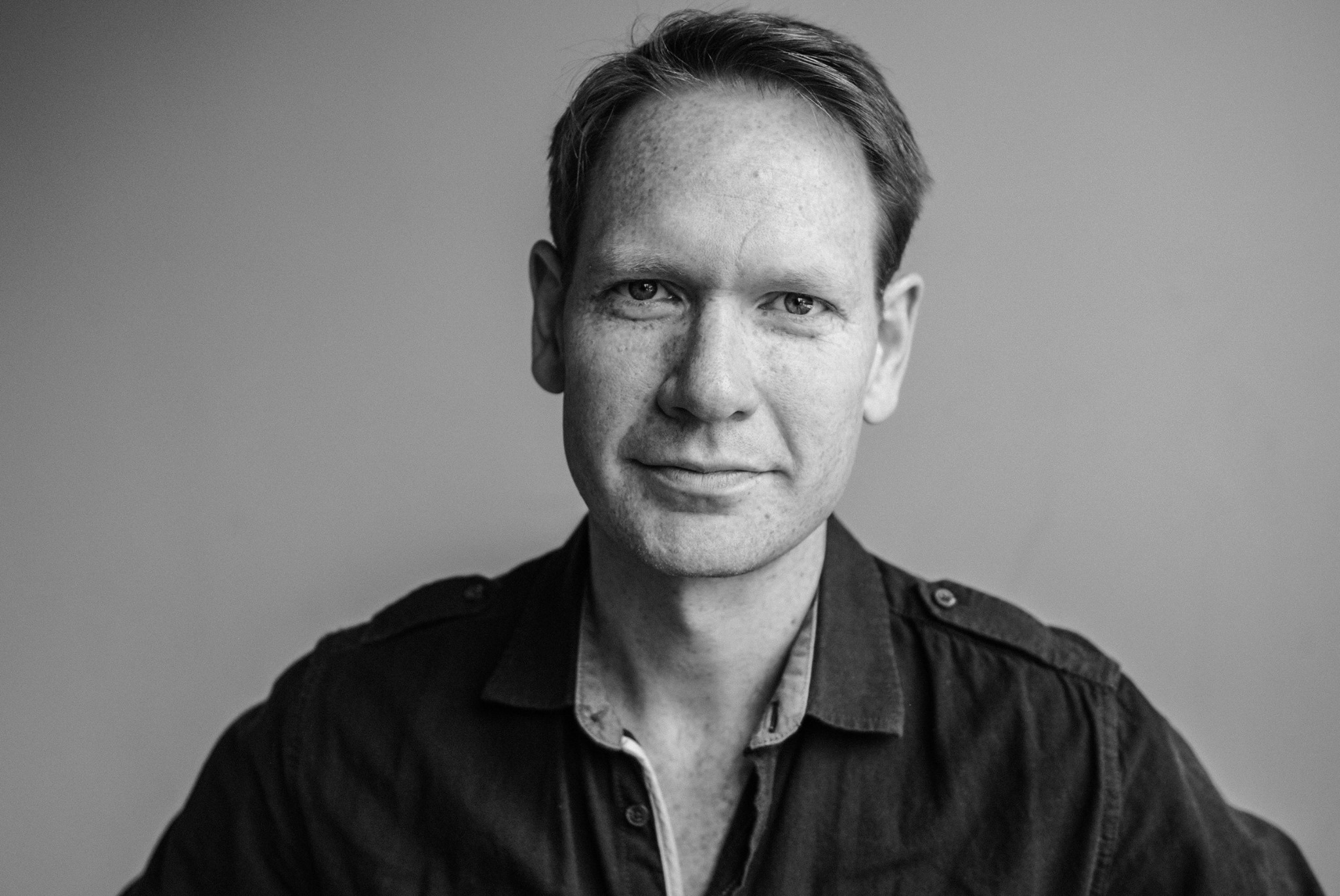 Andy Trithardt is one of the great dependable artists of Toronto’s indie theatre scene. A prolific sound designer and actor of impeccable consistency, he never fails to deliver a performance that’s as complex and moving as it is charming, including in Cart/Horse Theatre’s excellent production of Paul Dunn’s Dalton & Company where his performance as a middling but competitive academic earned him an Outstanding Supporting Actor nomination.

We last spoke to you for the 2012 Nominee Interview Series. Catch us up on your life since then.
Life is excellent at the moment. I’ve had the very good fortune to act in and do sound design for a lot of really unique shows over the past couple of years, including a few musicals (Offline at Talk is Free and Dear Johnny Deere at Persephone), which has pushed me outside my comfort zone. It’s been a really fun and artistically fulfilling few years. And busy, which is always good.

You’ve worked a lot with Kat Sandler since we interviewed you last, including my personal favourite Sandler play Sucker. What have been some of your favourite Brouhaha memories over the years?
I’ve always loved working with Kat. I always feel like I’m scrambling to catch up with her, her brain moves so fast. I feel very lucky to have been a part of that extremely talented cast of Sucker. That show was one of the best versions of what I think Kat does really well, which is combining heart wrenchingly sad situations with her own brand of comedy. It’s also amazing to get a chance to work with the same director multiple times – you develop a kind of shorthand that helps speed things along when time is already short.

Taking Delicacy on the road a couple years ago was a huge highlight for me. We did the show a couple of times at Queen’s in Kingston and we were invited to the Wildside Festival at the Centaur. It was the same year Uncalled For broke the festival box office records, so it was a really fun time. We ate so much poutine at 2am. It was awful and amazing. I love everyone involved in Delicacy so much that it can hardly be called work to rehearse and perform that show.

In 2015 you returned to the role for which you earned your first MyTheatre Award nomination– Gordon in Big Plans. What were some of the discoveries you made in returning to that part?
When we did Big Plans at the Storefront, we really tried as much as we could to make it a brand new production, and I think to a large extent we succeeded. I tried very consciously to not fall into old habits or do things the same way I had in the previous versions of the show. It was a great exercise in problem solving and finding new solutions to issues that had been dealt with in different ways before. It really is such an excellently written play that there’s a lot of room in it to make it your own. The first time around we really tried to put the audience on edge and make them feel very uncomfortable. In Kat’s production, we had Tim Lindsay’s beautiful motown sound design, and we really played up the comedy that is inherent in the piece. It was a totally different take that I think worked just as well.

Also because of the layout of the Storefront, we were finally able to hack the back off a fridge and achieve all the “fridge magic” that is written into the play. It was great to have Danny [Pagett] exit in his bloody underwear and enter a minute and a half later cleaned up and ready for a date.

You were part of the cast of last year’s Honorary Award-winning production Brantwood. What stands out in your memory about that experience?
What I remember most about Brantwood, aside from how exciting and bewildering and unpredictable it was, was how much energy it took to do a show. And as one of the teachers, I had WAY less to do than the students. Every performance included a show done twice (sometimes with different scenes in the second loop), plus a finale. I was lucky in the sense that, when my science teacher character kills himself at the end of the first show, I’d have about two minutes to myself in the bathroom before the national anthem started to play and we started the show up again. I think I might have been one of the only performers of the 42 of us who had a little off-stage time. Other than that, you were performing at all times. Though it was really fun when I would have someone follow me through my whole track. On the few nights where there wouldn’t be any audience following me during a given scene, I still had to give the same performance because about twenty other scenes are happening around the building at the same time and are depending on me having the same timing I had last time. Once we got into the swing of things, it turned into clockwork. It was this giant beautiful machine. I have huge respect for Julie Tepperman and Mitchell Cushman for how they orchestrated the whole thing. It was a really exciting event to be a part of.

How did you get involved with Dalton & Company?
I’ve worked with Matt Gorman a few times before (Adventure! and Like a Dog), and I’ve always loved working with him as a director. He sent me Paul Dunn’s script and I loved it. The play is set in the really insular world of academia, where the stakes are huge for those involved and seemingly non-existent for those of us looking in from the outside. The focal point of the show is this mentorship that three of the characters are attempting to get, and it’s obvious to us on the outside that the two people who don’t get it will be fine, will continue working, will have careers, but to the characters (Linda especially) the mentorship is absolutely the biggest opportunity to come their way. Randy and Linda are in direct competition with one another, but they both know Linda deserves it the most. And then this undergraduate comes along and takes it away from both of them and all hell breaks loose.

What attracted you to the role of Randy?
I really enjoyed playing Randy. He’s kind of goofy and awkward, which is almost exactly how I would describe myself, so it was fun to kind of lean into that. He’s got this little crush on Linda but is hopelessly unable to be cool about it. He’s just always doing the wrong thing. Then the mentorship is awarded to Charlie, and that upends all the power dynamics in the office, making Randy’s work life a source of stress and anger, the exact opposite of what it used to be. Before, he could just go to the office, get a little bit of work done, then just, like, surf the internet and talk to Linda. But now he has to deal with a huge work load, no Linda, and a guy he doesn’t respect telling him what to do. And he has to kind of figure out how to navigate that. Whether he’s going to just put his head down and do the work, or stand up for what he thinks is right. He does the latter, but it involves being a bit of a baby and storming out of the office after telling Charlie exactly what he thinks of him. Which was terribly fun to do.

Julia Course is also nominated for Dalton & Company. Tell us about working with her and the rest of the cast.
Julia is so fantastic. She played the character of Linda with such selfless abandon. Her Linda was always just kind of vibrating with neuroses. Her Linda had zero self-awareness and would just blurt out whatever came into her head, which made her a really fun character to play to. I also loved working with Marcel Stewart and Catherine Fitch. Everyone in that show brought a real honesty to their character. It was heartbreaking to watch Karen’s carefully constructed world crumble around her, that it was partially her own fault was even more awful. And Marcel really went on this beautiful journey where his character kind of stumbles into this position of power, and he begins to exploit it for his own gain. It was a terrific cast. I feel like I learned from watching each of them work.

Did you have a favourite moment in the production?
After Linda had quit the office and things had kind of devolved into this tense environment of no one talking to one another, Catherine’s character buys a cake to try and lift our spirits a little. But it was also a little pathetic and insulting to Randy, as she’s trying to pass it off as a gift from the professor and it very clearly isn’t. It was a super fun moment for me to play disgusted and annoyed while Catherine Fitch is beaming in front of me holding a cake. Absolutely a highlight.

You also did two runs of The Unending last year. Tell us a little bit about that show.
Man, I love Aaron Willis and Julie Tepperman. They are so hilarious, insightful, passionate, energetic and inventive. The Unending was a really beautiful show. The show consisted of three plays in three separate locations, all in 90 minutes or so, and we did two shows a night, so it involved a lot of running around Lippincott Street in various stages of undress, trying to beat the audience to the next location. I think Julie and Mayko [Nguyen] both did such beautiful work on their monologues. And in a show that includes plays by Strindberg and Beckett, for people to say they liked Julie’s play the best is saying something.

What are you working on now or next?
Nothing right now! I’m hoping to start work on a new album while I have some time off. I’ve also been doing quite a bit of sound design lately and I’m looking to do more of that. It’s something I’ve sort of stumbled into, and I’ve found I really enjoy. I’m also going to try and learn the clarinet. I’ve wanted to learn how to play the clarinet for so long now that, if I’d just done something about it like ten years ago, I’d be able to play the clarinet now. Life is full of regrets.