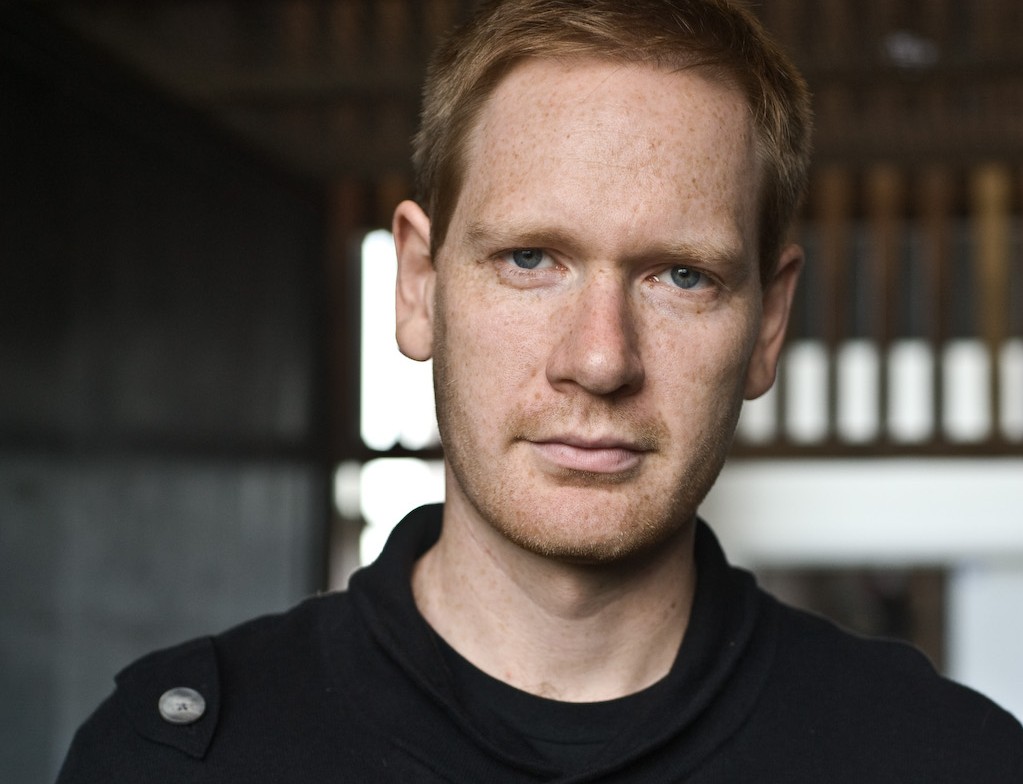 A standout of Toronto’s SummerWorks Festival two years running, Andy Trithardt first caught our attention as the charming Arbiter in Michael Atlin‘s 2011 chess play Zugzwang then flipped that image on its head as a well-mannered cannibal in the 2012 festival’s terrifying black comedy Big Plans. He followed that up with a great turn in Kat Sandler‘s awesomely nuanced new play Delicacy.

The prolific Best Fringe/SummerWorks Performance nominee (for Big Plans) joins our Interview Series amidst rehearsals for his impending return to the festival that earned him his nomination.

Do you remember the first play you ever saw?
No, I don’t. I do, however, remember the play that first really excited me: I saw a touring production of The Phantom of the Opera in Regina when I was young. Though it certainly isn’t my favourite, it holds a special place in my heart. I think it has something to do with the darkness of the story. The death and the organ made a real impression on me. Not so much the love story.

Where did you develop as an actor?
I studied at the University of Waterloo’s drama department and the George Brown theatre school.

What’s your favourite role you’ve ever played or production you’ve ever been in?
That’s hard; every production I’ve done has challenged me in a different way, taught me something about myself, about how I work, and about how I can grow as an actor and collaborator. But if one must be picked it has to be the role of the cannibal Gordon in Jeremy Taylor’s play Big Plans.

Is there one you haven’t tackled yet that you want to try your hand at?
Hundreds. Woyzeck, Who’s Afraid of Virginia Woolf?, Ubu Roi, Endgame, Godot, Julius Caesar, Titus Andronicus, etc., etc, etc…

Who are some of your favourite people to work with?
First and foremost, Jeremy Taylor. He and I formed Two-Wheeler Productions in 2006 and since that time we have produced a number of his plays, many of which I have acted in and done the sound design for: Living With Rick, The King of Fifteen Island, The Beekeepers, and Big Plans. He is generous, articulate, intelligent and loves exploring dark subject matter through humour as much as I do. As a result of his excellent work directing Johanna Nutter’s My Pregnant Brother and writing Big Plans, he won the SummerWorks Emerging Artist award last summer.

The first production we reviewed you in was the 2011 SummerWorks show Zugzwang. Tell us about the role of Simon the Arbiter and memorizing that patter of an opening speech.
Simon was just one of a terrific group of characters to come from the mind of Michael Atlin. When I first read his opening speech (two pages of, as I first understood it, chess nonsense), I knew that it could either be excruciating or exciting for the audience to listen to, and I tried very hard to keep it interesting. The key for me was to learn the moves inside and out, to find the excitement in them, and to try and make the audience as enthusiastic as possible. Not easy when an opening system of a chess game is the subject, but the challenge was fantastic.

The following summer you returned to SummerWorks to star in the dark and eccentric Big Plans. What attracted you to such a strange piece?
I have always loved Jeremy’s writing. It is simultaneously touching, witty, hilarious and graphically horrifying. The tabloid-headline subject matter of the play is of course the first thing you encounter in the script, but it is so much richer and deeper than that. These two very lonely, very lost men try to find something in one another that can give their lives meaning, or at least experience a genuine act with another person, and this all happens through bullying, kindnesses, humour, confessions, apologies, etc. The writing lends itself to a great deal of play between the two (then three) actors in the play, which is a performer’s dream.

Originally my role in the production was to do the original music/sound design, which I had gleefully been working on for months, learning the script and the characters, when the director, Tanner Harvey, asked me if I was interested in playing Gordon. I was instantly horrified. The graphic nature of the show became much more real as I imagined being the one pulling it all off. But as quickly as I realized I was scared of it, I knew it was the right thing to do, precisely for that reason.

How did you go about delving into Gordon’s disturbing mindset? What were some of the things you focused on to help understand his motivations?
I spent some time researching the real-life story of Armin Meiwes, the man who sparked the idea of the play for Jeremy. But after googling things like, “Is cannibalism illegal in Germany?” I figured I didn’t need to know any more and decided to try to avoid being put on a government watch-list. Really, I didn’t feel the need to think about the more disturbing parts of Gordon’s character too much. Those were always there, always on the table from very close to the beginning of the play, never hidden from either Henry or the audience:

GORDON: (To audience) We are going to cut off Henry’s penis.

HENRY: And eat it Gordon.

GORDON: Yes. And eat it.

GORDON: Together. That is the plan. They already know all this. That is why they are here.

GORDON: But it’s okay because he wants me to. He feels empty. It’s normal.

So, with all that business quite matter-of-factly out of the way, it fell to me to make Gordon as likable, hospitable and breezy as possible. If I could get the audience on my side, the natural course of action in the play would be so much more affecting. His desire to control and dominate is that much scarier when you see the side of him that yearns for genuine connection with both Henry and the audience. Though one of my favourite moments in the play is when I hug the frightened Henry who is on the verge of leaving, and for nine tenths of the audience it’s a really tender, beautiful moment, but I would always try to make eye contact with a few people only I could see and give them a little wink and a smile.

Tell us about working with Karl Graboshas as Henry. How does one go for beers with a costar they’ve spent the past hour attempting to eat?
Karl is one of the most generous and hilarious actors I’ve worked with. In a lot of ways, the first half is like a first date, and he was so deliciously awkward and clumsy, which made my expectations of a muscular, confident Henry that much easier to play. He spends much of the second half of the play in a cloudy, drug-induced state being manhandled, but he maintained an incredible focus that kept me on my toes as I tried to coerce him. Working with a less capable actor would have been way less fun.

It’s an unsettling piece. What were some of the strongest reactions you got from audience members?
To be honest, I was surprised at how few people walked out. When we did the show in December 2011 at the Freestanding Room in Montreal no one left, and at SummerWorks (to my knowledge) only a handful of people decided they had seen enough. There were a few things we had intentionally designed to make the audience as uncomfortable as possible, and with a few obvious exceptions, most people responded positively. If we had handled the subject matter coarsely or simply for shock value, I think more people would have been upset by it. The audience and its living, breathing relationship to Gordon and his actions are absolutely central to the success of the play, and I think we treated them with enough care and respect that (most) people felt very safe in the room. Though I don’t know how many of them felt like eating sausage for awhile. I know I didn’t.

Did you have any other favourite moments in that production?
I’ve already mentioned the wink, but another point I loved to arrive at near the end of every show was when Henry was gone, locked away in the fridge, and I had a short speech about what happens over the next year. I always found my way to Henry’s little pile of neatly folded clothes and just held them close, occasionally chewing on them a bit. After a long show of mostly posturing and manipulating everyone to get what I wanted, it was an opportunity to be alone and vulnerable, which was a huge relief.

You’re returning to the festival again this season with the remount of Kat Sandler’s My Theatre-nominated Delicacy. Tell us about your character Mark and working with Kat.
Kat is a powerhouse. The sheer amount of work she’s produced in the past couple of years is impressive. She’s one of the fastest-talking and fastest-thinking people I’ve met, which makes for a lot of fast-talking and fast-thinking characters. I love her ability to use comedy as a way in to examine and explore ideas. I like Mark; he’s a complex, angry, but also incredibly nice, polite guy. So for me, it’s a matter of building in those moments to let the audience share his inner thoughts.

What’s a tougher challenge- playing the disturbing intensity of someone like Gordon or the quieter unhappiness of someone like Mark? Do you approach the projects completely differently?
I wouldn’t say I approached the characters any differently. It’s a matter of finding the parts of yourself that you can identify with the character. In the case of Gordon, certainly I’ve never tried to coerce someone into letting me eat them, but I’ve felt lonely. I’ve felt the excitement of meeting someone new, the nervousness of trying to be interesting enough for them to like me. Once I was able to connect to that side of Gordon, the darker stuff was fairly easy, I found. And it’s the same thing with my character in Delicacy – finding the parts of Mark that are in me, the doubts, the fears, the unhappiness.

Other than perhaps their sensible wardrobe choices, your characters seem to have little in common with each other. How do you choose your projects?
I have been unbelievably fortunate to know numerous writer/directors who have asked me to be in new plays they’ve either written or conceived: Leora Morris, Kat Sandler, Matt Gorman, Fraser Elsdon, Michael Atlin, Jeremy Taylor and Brett Haynes. It’s a huge honour. The characters are as wonderfully different and bizarre as the people who have created them.

You’re also in a Fringe show this season. Tell us about that.
It’s Matt Gorman’s new show called ADVENTURE! I’ve had the pleasure of doing a few shows with him over the past couple of years (Zugzwang, Like a Dog) and I’m thrilled to do another. It’s a medieval comedy about death.