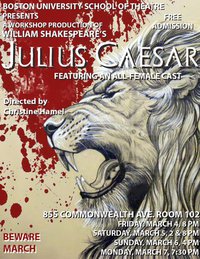 BU’s School of Theatre took on Julius Caesar last weekend, staging the homosocial epic in the unique Studio 102 space in the College of Fine Arts with a fifteen person all-female ensemble. It was an uneven production that made good use of space (the wonderfully dressed up studio was a feast for the detail-oriented eye) and great use of its talented cast but fell short directorially.

While some of Christine Hamel’s directorial decisions paid off (simple, suggestive costuming; well placed action; solid character direction), she got carried away when it came to some of her more high-minded artistic efforts. The ghost was staged with a complete lack of nuance, all drawn breath and wide eyes, never the least bit haunting. Many of the off-text moments fell the flattest, like when Titinnius declared that she would stab herself in the heart then preceded to slash her wrists (then keel over almost instantly- I’m not a science person but I’m fairly certain that’s not how that works). But it wasn’t until the fight sequences that I wrote off the direction completely. Whether the fault lies with Hamel or fight director Adam McLean is unclear, but the animalistic play on the murders of Caesar and Cinna the Poet read less like metaphoric interpretation and more like a scene from Mean Girls with all the irony taken out.

But there was redemption for the production, enough of it to make the show ultimately a success.
That redemption lay in the excellent ensemble. They weren’t all perfect: Genevieve Durst and Catherine Woodard, for example, overplayed their serious roles to comical effect; the strange speech patterns of Olive Fine were distracting and Sophie Gibson- Rush’s cold take on Caesar created a strangely robotic effect. But, for the most part, I couldn’t have been more impressed with the group of sophomores who took on this demanding show.

Julia Friley kicked off the show with her wonderfully dry take on the Cobbler while Awesta Zarif brought great regality to Flavius (as to her two other roles). Leigh Huggins was suspiciously understated as Cinna (in the best way) but authoritatively trustworthy as Octavius. Becca Sands had moments of greatness as Antony, though she struggled with the moments in between, and the chemistry between Portia and Brutus was palpable thanks to Olivia Fine’s unique sweetness. Speaking of Brutus, Kelly Kovacs turned in an impressive performance in the key role, mastering the balance of Brutus’ passion and self control. Caroline Cleary was a big hit, earning the most accolades among overheard audience members with her intricate portrayal of Cassius. But it was Julie Ann Earls who delivered my favourite performance of the night, as Casca. Whether she was sliding carefully into passive aggressive gossip, trembling in paranoia or gleefully conspiring, Earls stole my attention in almost every scene of the first half. My favourite moment in the production came in the simmering lead up to Caesar’s murder as Casca battled her inner demons, preparing to take the first strike. Crouched behind a pillar bearing Caesar’s image, Earls delivered the production’s most complex emotional turmoil, out of sight of probably half the audience. It was a moment I was very glad not to have missed in a performance that truly stood out.

Ultimately, the silliest, strangest directorial choices in the world couldn’t have detracted from this talented group. I look forward to the careers the have ahead of them as they graduate CFA.