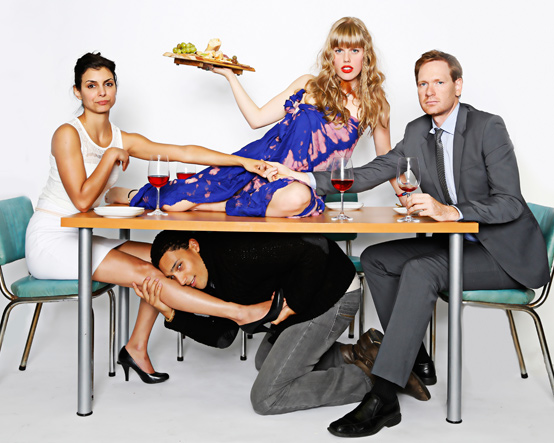 Theatre Brouhaha assembled one of the best casts available from the Fringe and Summerworks circuit for the premiere of artistic director Kat Sandler’s new play Delicacy. Sandler writes with a quick wit and strong point of view and Delicacy aptly showcases those strengths as she explores the ways in which we trap and excuse ourselves and each other through modern relationships. It’s a wickedly funny piece, one of those that is deceptively enjoyable despite the creeping sense of impending implosion that’s there from the first minute. Sandler paired with designer Alain Richer to create a beautiful and creepily perfect set (lit fantastically by Melissa Joakim) on which her damaged characters did their dance of pretend contentment.

Those characters are two married couples who met at a sex club and are reconvening in the real world for charcuterie and some swinging. The first (the inhabitants of the perfect set) are Tanya and Mark , a couple so meticulous that they can be nothing but unhappy, something that becomes abundantly clear the moment Summerworks standout Andy Trithardt pulls out his uniquely stinging passive aggression, throwing it at Tennille Read’s laser-sharp Tanya with a perfect “how did we become these people?” melancholy. The other couple is made up of Kaleb Alexander’s easygoing casanova Len and his beloved loose canon of a wife Colby (Kelly McCormack). It’s nice to see Alexander play the comedy, charmingly egging Trithardt’s Mark on towards self-imposed neurosis over accidental racism (in one of Sandler’s most amusingly constructed yet revealing gags), and despite the occasional verbal grenade Mark is a nice step up in fundamental goodness from Trithardt’s memorable recent role as an amiable cannibal (one of the play’s most interesting features is actually the audience’s journey to pinpoint whether Mark and Tanya’s unhappiness is really all that real). That’s a trait that marks Sandler’s work as particularly insightful- the sense of fundamental goodness. I like modern writers who recognize the human balance between good and bad that exists in everyone and she does a fantastic job of creating darkness in her lightest and most victimized characters and redeeming points of well-meaning goodness in her most selfish and broken. Everyone is crazy but everyone is right somehow and everyone is bad but everyone is good, even if they’re all constantly wrong. If that sentence didn’t make sense to you, maybe it’d be best to pass on Sandler’s next offering since the emotional highs and lows and dark reveals of her characters fly out and spiral in thrilling but potentially confusing ways that could leave an unsuspecting audience member in the dust. It’s all so funny that the characters might be four revealing moments of tragedy ahead of you before reality starts to sink in.

With a strong cast (the men are particularly great, and Read steals more than her fair share of the stage) and a script that manages to be fun and say something about how we live at the same time (which sounds simple, but is rarely accomplished), Delicacy was the sort of rollercoaster of thought and emotion you want when you walk into the Factory Studio Theatre but you almost never get.