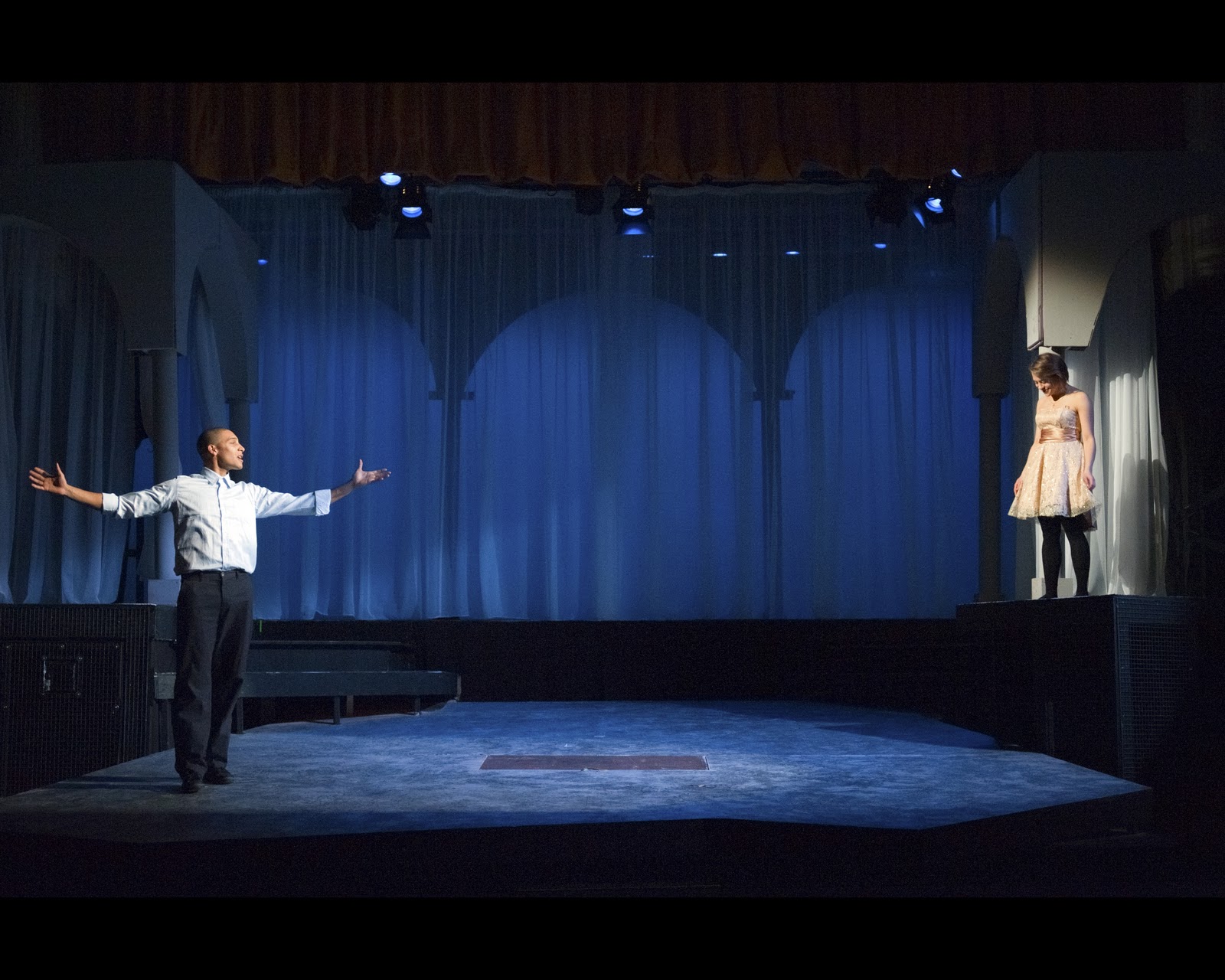 Shakespeare in Action: Romeo and Juliet

I am extraordinarily picky when it comes to Romeo and Juliet. I adore the play and have what my friend Maddi calls “thoughts and feelings” about it, meaning I’m overly attached to a very strict interpretation that exists in my head of the pedestalled piece. I know it like the back of my hand, to the point where I’m counting off the scenes as they go “okay, 1.5 down, wow they completely cut 2.1, straight into the balcony?”. Basically, I’m an R and J geek who believes that Lord Capulet is a key character, it’s grossly detrimental to try and stage it in period, Paris should be highlighted and that the only truly great Romeos are those elusive golden boys with the priceless ability to light up a room just by walking into it. Shakespeare in Action’s student-geared, pared-down matinee version is far from perfect, but when Romeo and Juliet is taken off the page by the right director and ensemble, it sweeps you up until you don’t care about the details anymore.

The star of the production is Kaleb Alexander’s dashing Romeo. That aforementioned priceless quality? Alexander’s had it in spades since I first met him more than 7 years ago; he’s probably always had it, actually, and always will. His Romeo is entrancingly charming, the perfect balance of boyish enthusiasm and sweeping romance. Alongside Benvolio (Marcel Stewart) and Mercutio (David Shelley), he displays the sort of deep-rooted camaraderie that perfectly establishes their friendship; and Alexander isn’t afraid of the graphic sex jokes, while never running the risk of the romantic lead slipping into sleaze territory. He’s bright and joyous (despite his 1.2 melancholy) until the play’s turning point when he collapses in on himself (in a good way), heartbreakingly dimming as Romeo struggles to even stand up straight. With Shaina Silver-Baird’s Juliet, the chemistry is strong, Alexander playing both clumsy nervousness and easy sex appeal (eliciting more than one “whoop” and whistle from the adolescent girls in the audience). The final moments of his death are perhaps a little melodramatic- stumbling, wheezing, clutching and gasping as Romeo reacts to his poison- and the stakes in the all-important nightingale/lark scene don’t seem quite high enough, but I’ll forgive Alexander almost anything on the merits of his superb command of the language, accessibly modern style, and heartbreaking “banished” scene.

Silver-Baird is at her best with Alexander and in comic moments with Nicole Roberts’ exuberant Nurse. The practised exasperation act she plays out with her mother (Lauren Brotman- inconsistent but refreshingly conflicted as Lady Capulet) adds a nice touch to that relationship as they listen to the Nurse prattle on in 1.3, though it does serve to distance her from her Nurse a bit more than is usually expected. That ground is made up in an excellent 2.5 as Juliet coaxes information from her tired and teasing confidante. It’s what makes that scene standout that also hinders Silver-Baird a bit in some of Juliet’s more innocent moments. Despite her small frame, Silver-Baird has never been what I think of as a natural ingenue- she’s too tough, too crafty, too unlikely to fall for some preposterous plan involving heart-stopping drugs. In short, she’s a savvy actress- an excellent thing to be at the age of 22, but a tricky thing to be when faced with playing a silly 14-year-old who falls madly in love at first sight then makes a series of legendarily bad decisions. Alexander’s irresistibility helps her case, but Silver-Baird is an awkwardly grounded Juliet, overcompensating a bit with a lilting cadence in early acts, her wheels turning just a little too much, her skeptical brow furrowing a bit too quickly, her dance moves a bit too effortlessly sexy (a strong triple-threat, Silver-Baird’s training makes her Juliet an expert salsa dancer). Those very qualities make her performance in Act 4’s impossibly ghoulish potion speech and Act 5’s climactic suicide more refined and impressive, but as the sweetly optimistic girl of Act 1, I just don’t buy it. Silver-Baird will someday make a tremendous Lady Macbeth; I would love to see her Cleopatra, her Gertrude, her Queen Margaret, but unfortunately her current young, short and pretty-ness will see her miscast for at least another decade.

Also miscast, or rather misused, is Eze Angius doublecast as Paris and Tybalt. The former takes the handsome and charming actor and makes him a snivelling dork; I would have much preferred a more even-keeled Paris who doesn’t make a liar of the Nurse when she drowns him in compliments. The latter is an odd Karate Kid-like combatant who, with fewer than 20 lines, seems more full of words than fire. A few attempts are made at establishing some sort of connection between Tybalt and Lady Capulet but he generally seems sourcelessly and unconvincingly angry, a caricature when he needn’t be one. David Shelley’s Mercutio is similarly uninteresting, though at least significantly more likable. It’s remarkably difficult to deliver a truly remarkable Mercutio; he’s always expected to steal the show yet not outfitted with scenes that make that particularly easy (especially here with most of his bawdiest humour deleted). Shelley does an admirable job with what is actually incredibly demanding language and very little character guidance, though he gets swallowed up by Alexander’s dynamic spotlight competition and out-endeared by Marcel’s Stewart’s sweet hipster/nerd Benvolio. Mercutio dies before truly establishing who he is in the text- he’s clever, he makes some good jokes, points out the occasional truth, but gets no story of his own- it’s the actor’s job to attribute him a rich character life, but Shelley relies on excellent comic timing and the strength of the text to carry him, which isn’t quite enough.

With only 9 ensemble members, cross-casting like Angius’ is to be expected. And for the most part it works quite well. Peter Smith is the grand poohbah of older male roles, differentiating his many characters easily, while clever costuming and a conveniently invisible Apothecary help to clarify who’s who. The only time it bothers me is when Nicole Roberts dresses her Nurse up in a police uniform to double as the Prince. She’s simply ill-suited to the role, her shrill Nursy daffiness grating on my nerves when she speaks lines of authority, though it’s perfectly fine the rest of the time.

There might be a few casting issues, the occasional character interpretation misstep, but Shakespeare in Action’s Romeo and Juliet flies along as the generally talented ensemble delivers the bard’s verse with the clarity and understanding that I like to take for granted from professional companies (though I often find it lacking). All my little R and J quibbles matter only on paper as I sit and nitpick after the fact. The modern staging is right on the mark and the time-efficient cut barely even broke my heart at all (though I was sad to see Paris deleted from Act 5 and Mercutio lose his 2.1. Oh, and Romeo’s 5.1 dream speech- I missed that too!). But when it comes down to it, I’m not sure I’ve ever seen a Romeo and Juliet as successful as this one. I’ve seen interpretations more innovative (like Sarah Gazdowicz’s 2010 production) and performances far more refined (Des McAnuff’s 2008 version, for instance), but I’ve never been quite so convinced to actually care about the silly teenagers in the title and their ever-so-misguided love. With Kaleb Alexander and Shaina Silver-Baird, it didn’t feel all that misguided, because I was swept into the love right along with them, until I turned into a silly teenager too.

Romeo and Juliet plays until November 25th at The Central Commerce Theatre in Toronto.