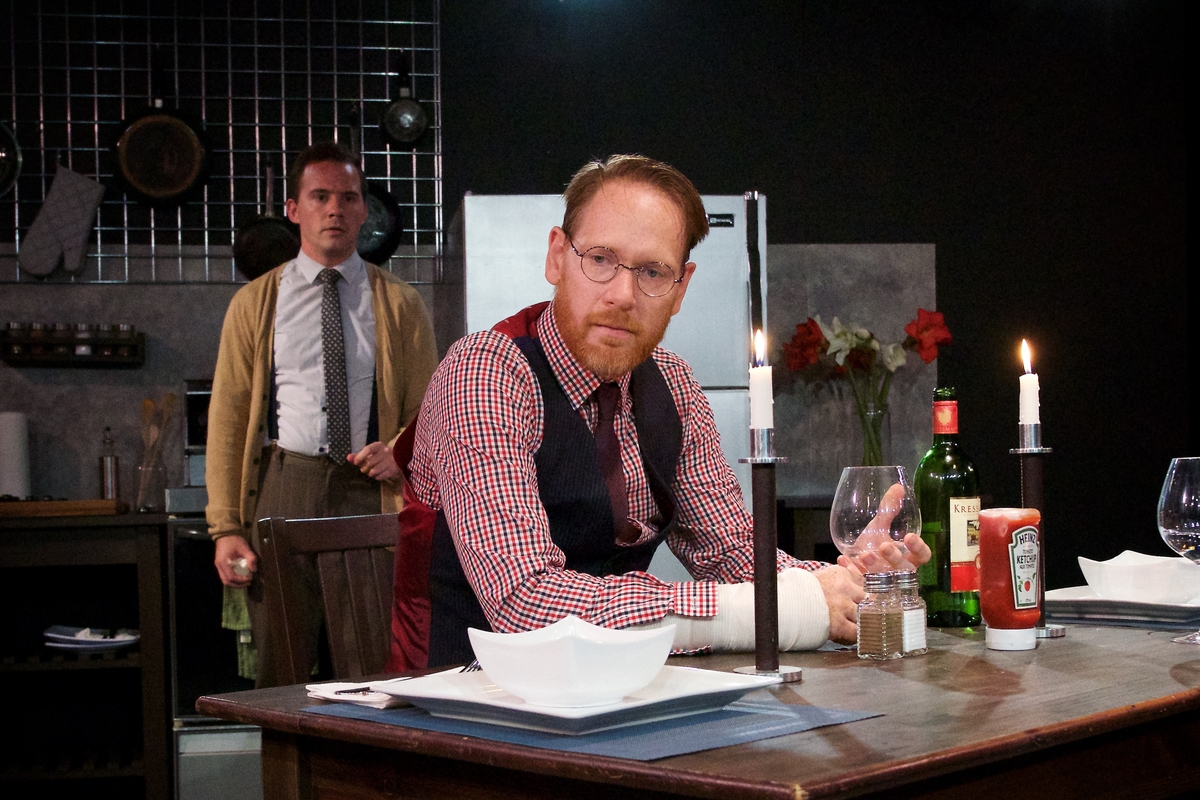 Dinner and a Show: Big Plans has Big Bite

In the forward to Melancholy Play, Sarah Ruhl, makes a plea to future producers of the show: “The audience knows the different between being talked to and talked at. Talk to them, please.” This phrase is in many ways the essence of Big Plans, the dark comedy by Jeremy Taylor, and directed by Kat Sandler. Chalk full of asides, metatheatrics, and a self-consciousness that made witnesses of us all, Big Plans is a thoughtful piece of theatre—as intelligent as it is delightfully gruesome. Big Plans opens a delightful can of worms: it is a grisly true story told with a macabre glee that makes accessories of the audience, asking who, really, is responsible for a man cutting off and eating another man’s penis.

Maybe you read about it: that case of the German cannibal who found his victim on the internet? Back in 2001, Armen Meiwes posted online “looking for a well-built 18 to 30-year-old to be slaughtered and then consumed”. Bernd Brandes responded to the ad as a willing victim. After some drinks and sleeping pills, Meiwes cut off Brandes penis, which the two tried to eat, before Brandes took a bath and Meiwes read a Star Trek novel. In the end, Meiwes killed him with a kitchen knife, cut him up and put him in his freezer. He consumed nearly 20kg of Brandes’ flesh before finally being arrested in December 2002, while looking for another victim online.

It’s into this strange world of true-story meets sensational horror that Big Plans inserts itself, balancing between the two with great accomplishment. Taylor’s complex script depicts a world that is shockingly recognizable, but with a stinging, surrealist edge. First, Big Plans is surprisingly accurate and well researched, following the details of the actual events to great effect. Further, the imagined moments of the encounter have a similar verisimilitude. When Gordon, based on Meiwes, and Henry, based on Brandes, meet for the first time, Gordon expresses dissatisfaction at Henry’s appearance. “That was an old picture, wasn’t it,” Gordon expresses with frustration, hilariously and satirically replaying online dating tropes.

But beyond the pale of theatrical realism, there are moments where we realize that everything in this world is not as it seems. Primarily the actors are very aware they are being watched: “you didn’t say there’d be other people,” Henry expresses awkwardly, looking out and the audience timidly. Making obvious witnesses of us all, implicating the audience, quite explicitly into the actions on stage, Big Plans turns the gaze of the audience outwards and back onto themselves. It does this in multiple ways, demonstrating the complexity of witnessing: by including us when Henry signs the consent forms (“Read it out, so we all know what we’re signing”); by turning us into postmodern vessels for identification (“Who are they? Nobody and everybody”); by simultaneously implicating us and taking away our power (“What if they get up and make a scene”/”That’s not what witnesses do”); to name only a few. The only criticism here, and perhaps the only criticism of the play at large, was that these moments were at time heavy handed. On the spectrum of metatheatrics, with Six Characters in Search of An Author at one end, and Funny Games at the other, Big Plans was somewhere closer to the former, telling us too much, or bringing up the audience as witness too many times. There is a balance of subtlety here, that was occasionally overdone.

This small question of “overdoing it” was truly only a small point. The set- with the audience imbedded, kitchen knives glistening upstage, and a magical fridge- was simple and elegantly used. Andy Trithardt as Gordon gave an earnest performance, too charming to be villainized, too villainous to be empathized, an ironically, disturbingly, and paradoxically all to relatable, all too human. Danny Pagett as Henry slips to dark places with a seamlessness that hits home, and then he’s back again: funny, sweet, goofy. His complex portrayal of Henry is one for the books; while other performers may have fallen into stereotype with Henry’s victimization, Pagett is at times a hero, at times a child, demonstrating a wide and impressive theatrical range with ease. Finally Maria Ricossa as Maria, Gordon’s mother, interrupts our pair in those crucial moments with a cool authority, bringing back the edge of satire with lines like “don’t talk with your mouthful, Gordon,” as she calmly smokes a cigarette.

All this comes together under the direction of Kat Sandler. In her Director’s note, she points to the heart of the play, that it makes the audience complicit in the murderous action. Quoting her, this story looks at “parts of society, of human nature, that are not always nice to look at, but necessary to examine.” As such, in the final moment of this review, I will state quite simply that Big Plans is necessary to see. It investigates the darker side of human nature without ever getting sensational or cynical. It uses the magic of a theatrical world, making these moments funny, heartbreaking, thoughtful, and gut churning. Big Plans is less about cannibalism and more about consent. It’s less about murder and more about witnessing. It’s less about why someone would do something like this, and more about why they are human, why they are like us. By injecting the human into the presumably inhumane, Big Plans asks complex questions on the nature of humanity—all in the breath of a laugh, in the bite of satire, in the smell of garlic burning, and the sound of meat sizzling quietly in the background.