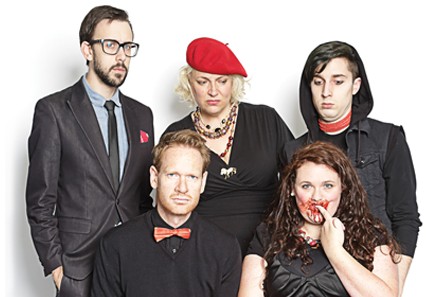 I like Kat Sandler a lot. She’s one of Toronto’s most consistently excellent young playwrights, always offering up vivid characters, spry dialogue, fabulous pacing and unique plots. But Sucker, the first two-act piece I’ve seen from her, is way better than typically good Sandler. It’s identifiably her- that wondrous wit is still there in spades; her pacing still rollicks- but something about Sucker feels more relentlessly honest than her earlier work. Though the backstory behind Beth and Jamie’s tragedy (the tragedy of their whole small town, really) is somewhat fantastical, their ridiculous emotional responses feel dead on (as does the pathetically hilarious angst of Colin Munch’s legal problem solver Carter who would cringe at my use of the word “dead” in that previous sentence). The sibling relationship between Beth and Jamie (as told through Jessica Moss and Andy Trithardt– two of my favourite indie actors paired perfectly in these roles) is intricate and intimate, easy and fraught, hyper verbal and wonderfully unspoken; in short, it contains all the beautiful and torturous complication of a real sibling relationship. Even if the other characters weren’t themselves great examinations of grief and discontent in its vast horrifying forms, even if the play contained none of its fascinating ruminations on faith and fiction, even if Sandler had somehow lost the funny when handling such delicate material (Note: none of these things are true), the heartbreakingly vivid central sibling relationship alone makes Sucker impossibly special.

After the sudden and horrible death of their so-fantastic-it-hurts parents, Jamie took off on a 3-month trip to Israel and Beth retreated into a delusion that has allowed her to all but escape fully from the living world, her only connection being the kooky tenant sleeping in their parents’ room (a wonderfully empathetic Astrid Van Wieren). The play opens as the siblings are reunited.

Let me give you an example of Sandler’s insight into the wonderfully dysfunctional way human beings attempt to deal with their insurmountable feelings: upon seeing her beloved big brother again, Beth immediately begins attacking Jamie’s drastic weight loss. Sandler adopts the issue as a useful outlet for Beth’s deeper feelings of abandonment, but also as a physical symptom of Jamie’s mental state, and an emotional link to the kind of parents they had- supportive no matter what, the creators of “marshmallow Tuesdays”. All that in a seemingly throwaway D-plot that on the surface exists just for the (admittedly high) joke value. Later, instead of leaning on the easy emotional shock of a plot twist involving Van Wieren and a mysterious character played by G. Kyle Shields, Sandler sets up that expectation then undercuts it with a dose of psychology punctuated by empathy that’s far more effective than the original plot twist ever would have been. Sucker is full of such cleverness. It sports a top-notch cast (Trithardt is particularly mesmerizing as he attempts to forcibly cram all of Jamie’s loss into a new religious obsession) and strong direction (also by Sandler) but the magic is in that script, Sandler’s best so far, and that’s saying something.