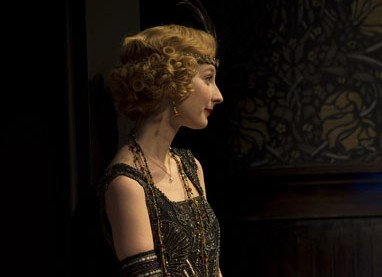 Julia Course is the up-and-coming beauty who often plays The Shaw Festival’s bright-eyed sweethearts. That description came most true in last summer’s delightful production of W. Somerset Maugham’s Our Betters, a somewhat controversial but ultimately sweet play about well-off American ladies who’ve traveled to England to marry into a title.

Playing opposite many of our favourite Shaw stars, Julia shone as the naive and optimistic Bessie, earning her first My Theatre Award nomination, for Best Supporting Actress. She took some time as she dives into rehearsals for Shaw ’14 to answer some of our questions.

Can you remember your first experience with theatre?
When I was six I memorized the box office phone number for Phantom of the Opera and begged my parents to take me for my birthday. Watching the show I remember thinking: “I want to do that.” I also remember thinking “I can’t do that because I have a lousy singing voice.” I just assumed all actors had to sing.

What actors and actresses have always inspired you? Are they the same today?
I fell in love with Mary Pickford and Charlie Chaplin in high school, and they are still two of my favs.

How do you think your experience at the National Theatre School was distinct from other training programs. Did it give you a leg up heading into professional theatre?
I had spent some time at university before I got to NTS, and for me the thing that set NTS apart was the fact that everyone in the building was there to make theatre. Whether learning to write a play or design a set or become a stage manager, we were all trying to do the same thing in a hands-on, practical way. So just being in that building felt pretty romantic. There was a feeling of all the people who had trained before us. The rehearsal rooms had a kind of energy in them.

If you could perform on any stage in the world, which would you choose?
The Globe theatre in London, England. I’d love to do a show in the open air, with the audience right there, leaning up against the stage. I bet it would be thrilling and really scary.

How did you get started at the Shaw Festival?
I grew up in the Niagara area, and every summer I’d watch as many plays at the Shaw as I could. So it was a dream job for me; I was thrilled when I started as an apprentice. I learned so much from sitting in on rehearsals and understudying, and watching the productions grow over the course of a summer.

What was your first big role at the festival?
In Drama at Inish I played an accountant named Christine. I was playing opposite one of my dearest friends, Craig Pike. We had to kiss in the show but we couldn’t get through it for about a week because we were laughing so hard. The cast was wonderful. It’s one of my favourite shows that I’ve been a part of.

Describe the rehearsal process for Our Betters.
I read a couple of great books on the period, specifically the trend of wealthy American women migrating to London to snag British noblemen. So that was a good foundation to start from. The play starts with Fleming and Bessie meeting after having not seen each other for a long time, so Wade [Bogert-O’Brien] and I wrote letters back and forth in character. We were on our feet pretty early in rehearsal, working through the text in the space rather than sitting at a table.

In a festival that tends to be all Brits all the time, you played a rare American character. How did that influence how you approached playing Bessie’s mannerisms and style?
I found a letter from an Englishman describing the women coming over from America at that time. I loved it so much I taped it to my wall. Maybe he was in love with one of them because it was an incredibly charming portrait. He describes the way in which these girls would brazenly walk up to a stranger and introduce themselves instead of waiting for a proper introduction. He also said they had a tendency to just blurt out whatever they were thinking. It was shocking and refreshing for him, seeing a woman act that way in society. That, to me, seemed like a good jumping-off point for Bessie. So there was fun to be had in the way she could interact with the British characters and that kind of decorum—not just with her suitor, but also with the butler too, for example.

A strange controversy flared up around Our Betters when director Morris Panych responded to a harsh review in the Globe & Mail that said the play was negative about women. Do you think the reviewer (J Kelly Nestruck) had a point about Maugham’s text? In what ways does Bessie support or contradict that idea?
I don’t read reviews; so I didn’t read the review, or the response. And since I lived with Bessie for eight months and fell in love with her, it’s almost impossible for me to judge her from an objective, outside eye. I think the women in Our Betters were attempting to live outside a purely a domestic sphere, and they went about it with whatever resources they had. For my money, Bessie’s got two real options: go back home with her childhood sweetheart and have children; OR live in a new and exciting city, go to the best parties, eat the best food, meet the most interesting people, wear the most beautiful clothes, host salons, rub elbows with intellectuals and artists. For a girl in her early twenties at the turn of the century, I think the latter option is pretty tempting. I also think the decision would be pretty crippling. Sylvia Plath articulates it in the 60’s (which fig to choose? “I wanted each and every one of them, but choosing one meant losing all the rest”); I often feel like that in 2014, my guess is Bessie felt like that too. So no, I don’t think Maugham paints Bessie in a negative light, I think he creates for her a pretty truthful struggle.

Do you have a favourite moment from that production?
It’s an offstage moment, but I really liked drinking tea with Thornton Clay on the back porch.

Do you try and see every play in the season? What were some of your favourites of 2013?
I see every play, every season, often more than once. (Free theatre!!) I saw Enchanted April three or four times. I loved it!! Faith Healer was exceptional.

What are you set to play next season at the Shaw?
Next season I’m playing a character named Margery in The Charity that Began at Home and a young woman named Rose in The Sea. They’re both very different women living in very different worlds, so I’m really excited to explore that contrast. I think it will make for a really interesting, challenging season.

When do you start rehearsals for summer 2014? Any word on what the productions will be like?
I start rehearsals for The Charity that Began at Home in early March.  I haven’t heard anything specifically about that show, but I have seen photos of the staircase that’s being built for Cabaret, and it looks reaaaally cool.

Do you see yourself as someone who’d like to stay with Shaw for many seasons?
I’m so grateful for the time I’ve spent in the company at the Shaw Festival. I’ve learned so much from watching rehearsals, understudying, and working alongside such talented, generous, kind people. I love the mandate here. The female characters that populate these worlds intrigue me; I think about the concept of the “new woman” a lot, and my relationship to her historically speaking (so nerdy, but true!). These plays have captured my imagination and my brain and my heart since high school, and I’m pretty sure they will for a long time.  I’d be very happy to spend many more seasons trying to figure them out.