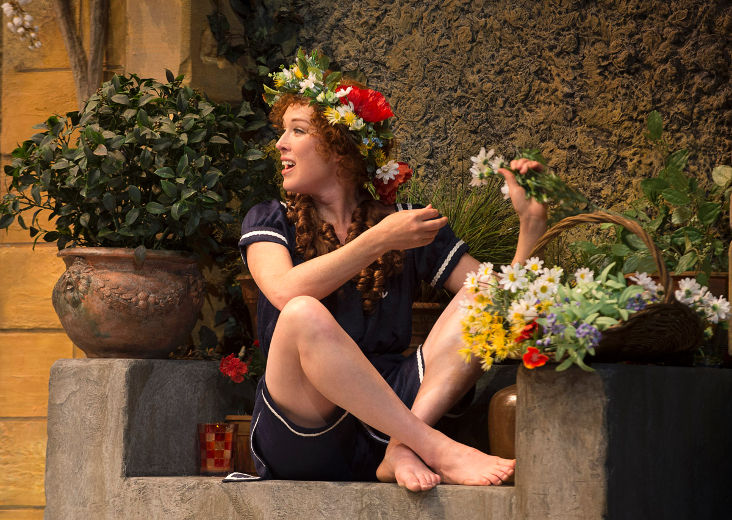 Every time I’ve reviewed Moya O’Connell in the past, I’ve made some mention of how beautiful she is. The reason I do that is two fold: 1- The major roles in question were Maggie the Cat and Hedda Gabler, characters whose beauty is talked a lot about in their respective plays; so McConnell’s face was relevant. 2- She has the sort of darkly alluring look that makes morally ambiguous vixen roles like Maggie the Cat and Hedda Gabler fit her like a glove. It’s almost alienatingly striking, Moya O’Connell’s face. Sharp-angled features with pale skin, icy blue eyes, dark hair, and the highest cheekbones you’ve ever seen. She has what I would call a Hedda-esque look to her. Her Hedda Gabler was magnificent, by the way.

Please do hold on, I have a point.

I really liked Enchanted April for lots of reasons, but the biggest was how much I loved seeing Moya O’Connell in a comedy. She’s also in Peace in Our Time (where she uses her face to hilariously cold effect as a hardened Soviet) but it’s the Enchanted April sort of comedy that so delightfully frees Moya O’Connell from that fabulous Hedda-esque face of hers. As Lotty Wilton she’s warm and weird in the very best way, loving and spirited and, against all odds, every inch believable as a frugal and overlooked housewife longing for a romantic Italian adventure. It’s the sort of performance that can completely revise the limits of what you think is someone’s wheelhouse. It’d be like Ben Sanders convincing me he’s not an English Lord (which he’s not, he just looks so much like one!) or Jeff Meadows convincing me he’s not that tall (which he is and there’s no getting around it). I always thought she was a very strong leading lady who could navigate massive parts well, but a part of me always suspected that Moya O’Connell might just be always cast in the perfect role for her. In what many might call her “easiest” role in years, it became finally wonderfully clear to me that she’s so much more than a pretty face.

What’s interesting is that said revelation came amidst a piece that I can’t help but describe as “pretty”. It’s so pretty. When William Schmuck’s clever set opened up to reveal the glorious Italian seaside that had been hiding behind dusty British walls, the audience literally burst into applause marvelling at its beauty. Enchanted April is a rare show with a wholly happy ending, free from pesky things like notes of melancholy or foreboding. It’s about unhappy people finding a way to be happy and the way they go about it is just so pretty- from Schmuck’s costumes to the fun of Matthew Barber’s dialogue to director Jackie Maxwell’s brisk pacing and the overall excellence of the cast (I even liked Tara Rosling and I usually find her extraordinarily hard to relate to).

Among the supporting players, Marla McLean stands out in her second great performance of the year (after Lady Windermere’s Fan). As wounded party girl Lady Caroline Bramble, she infuses the optimistic proceedings with a wonderfully layered performance and contrasts Lotty’s bubbly sweetness with a fabulous dose of dryness. I also enjoyed Jeff Meadows as Lotty’s selfishly unaware though ultimately goodhearted husband. But this is the ladies’ show through and through, the only other men being Patrick Galligan’s caddish Frederick Arnott and Kevin McGarry as the hunky owner of the Italian estate Lotty and Rosling’s reserved Rose rent to kick off the action (I feel bad always just calling McGarry a hunk but, his British accent being as bad as it is, that’s his major contribution to the production).

An afternoon spent at Enchanted April is a lovely thing. It’s 2 hours and 20 minutes of your life when Hedda Gablers are comedic charmers and dreary British sets open up to beautiful vistas and the answer to any problem can be found in Italy.