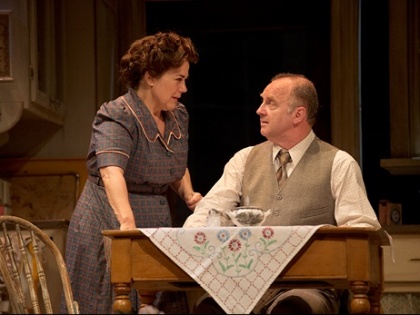 At the Shaw: Come Back, Little Sheba

Come Back, Little Sheba is a disjointed play. During the first act, it feels like a trivial tragedy not tragic enough to earn that description. The characters are fretting losers with problems so superficial that it’s remarkable how easy they would be to fix. Marie: date nicer boys (and try just one at a time); Doc: tell Marie to find a new place to stay, get a male boarder; Lola: get a new damn dog! Oh, and as your snotty neighbour says, “get busy”. That last piece of advice is delivered again later on, when Lola’s problems are far too big to be solved by “getting busy” but in act one they’re the only useful words in the script. It’s all about the static of loneliness and idleness and useless longing. Little Sheba is the name of Lola’s missing dog whom she calls from the front porch every day, hoping he might come home. It’s a lazy metaphor for her former happiness but at least the awkward mailman/milkman encounters give the first act some laughs, even if they’re forced and maybe a little mean.

Act one’s saving grace is a quart of whiskey that sits in plain view in the glass kitchen cabinet. It’s Chekov’s gun and the only promise the play gives us of actual consequence to come.

BAM! Act two tramples on act one’s lame meandering and busybody antics as Doc is pushed over the uncomfortable edge by Marie’s boyfriend exploits, he takes Chekov’s gun off the shelf, and drinks it. This is where Corrine Koslo finally gets to show off how incredibly good she really is. As Lola paces and frets and trembles at the thought of Doc a) never coming home or b) coming home, Koslo makes good on the character work she planted in the overlong act one with a tour-de-force of human emotion. When Doc finally does come home, he explodes in a fascinating drunken rage that hits its highs and its tender, remorseful lows in the most terrifying way possible. It’s the performance of the year from Ric Reid.

Silly, frivolous Marie isn’t worth the trouble she causes as played by the one-note Julia Course, though her absolute innocence in the matter is an important reminder of just how complicated Doc’s problems really are. Kevin McGarry plays her boyfriend (with Andrew Bunker as her fiancé) and is too good-looking to be real, but not particularly notable beyond that. Graeme Somerville stands out in the tiny but strong role of Ed, one of Doc’s friends tasked with calming him down instead of the police. The set (a basic home with dozens of windows hanging beyond its walls) is an interesting one but it speaks to act-one Lola (the bored busybody) more than act-two Lola (the conflicted and terrified victim/devotee), though I suppose there are themes of embarrassment, pride and the terror of public knowledge that might be relevant to all those windows. Doc’s problems are swept under the rug, dealt with mostly internally, and forgiven as best they can be in the scenes that follow- a bittersweet ending that’s more than a little bit scary. The play should end a scene earlier than it does, when the tension is higher and the ambiguity intriguing, but as is it still leaves an unsettled feeling in the theatre as the curtain falls. With a cast this strong, act two of Come Back, Little Sheba is powerful enough to overcome frustrating characters, obvious metaphors and an act one that should be shorter by at least half since it’s got so much less to say than what’s to come.