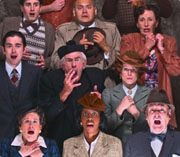 At the Shaw: Drama at the Inish

Drama at the Inish, a comedy written by Lennox Robinson and directed by Shaw Festival Artistic Director Jackie Maxwell, does nothing in particular wrong. The dialogue is clever, the plotting concise, the staging effective, the set well dressed. The talented cast aptly juggles their quick comic material with excellent Irish accents. But the whole thing is somehow remarkably dull.

The story revolves around an uppity theatre troupe- represented in the grandiose caricatures of Constance Constantia and Hector de la Mare, given exuberant life by Corrine Koslo and Thom Marriott respectively- who come to a small Irish inn to play for the summer and bring high culture to the quirky inhabitant of the little town of Inish. I can’t actually think of a way to improve upon that premise- it’s a wonderful one full of possibility for both the highest and the lowest brow of comedy.

The cast is capable, though Koslo and Marriott do grow a little tiresome in their theatrical parody. Mary Haney is the highlight as the dotty spinster sister who attempts to run the inn but mostly makes way for savvy maid Helena (the charming Maggie Blake) to clean up her messes. Julia Course is also lovely as the sharp but sweet inn patron Christine Lambert.

Yet somehow the whole doesn’t seem to match the sum of its parts and the solid cast and promising script fall flat.

Perhaps the story needs an update (and goodness knows the Shaw Festival could use a break from period pieces with challenging accents)- modernize, move it out of the Irish seaside and into, say, the Canadian prairies or the Maritimes. One of the themes I noticed at the festival this year was a staunch adherence to traditional staging. Only the original or specifically modern works (Topdog/Underdog, Maria Severa, When the Rain Stops Falling) did anything at all interesting when it came to interpretation. I’m all for respecting the writer and staging their original vision, but when it comes to works that have seen hundreds of stagings and decades pass by, it’s time to bring something new to the table.

Jackie Maxwell’s production of Drama at the Inish is well blocked, designed and paced, but what she did was stage it, not direct it. The decent script isn’t a masterpiece, it can’t be expected to stand on its own in this day and age, it needs to be mined for what makes it interesting and not just acceptable. The lightening needs to come from somewhere, it’s the director’s job to try and find it; Maxwell seemed to be content with a light rain.

Drama at the Inish plays at the Court House Theatre in Niagara-on-the-Lake until October 1st.