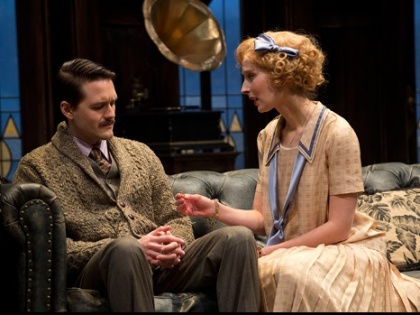 At the Shaw ’13: Our Betters, a Controversy

When Globe & Mail critic J. Kelly Nestruck reviewed The Shaw Festival’s current production of W. Somerset Maugham’s 1915 comedy Our Betters, he somewhat dismissively declared it outdated and a negative representation of women. This led to a mild hullabaloo as its big name director Morris Panych took the comment too harshly, responding with a dramatically eloquent and immaturely vindictive personal attack against the writer on the newspaper’s website.  The whole thing was utterly ridiculous (though I wish my hatemail were half as poetically phrased) and neither party came out of it looking particularly shiny. What’s perhaps most interesting about the exchange is that it was all prompted by what might be the most undramatically charming production of the Shaw’s undramatically charming 2013 season.

Nestruck was right in saying that the play’s central figure, Claire Jullien’s social climbing Pearl, is a fairly inhuman monster (though Jullien herself is a delight) and that Laurie Paton’s Duchesse de Surennes is pathetic even in moments that could have been mined for more positive pathos. But they’re not monstrous and pathetic because Maugham clearly hates women, they’re monstrous and pathetic because the plot needed them to be; and because sometimes people are monstrous and pathetic. Also monstrous and pathetic: Neil Barclay’s gaseous poseur Thornton Clay (male) and Lorne Kennedy’s skeezy marital interloper Arthur Fenwick (male). That’s a 2-2 tie. Julia Course’s flawed but sweet Bessie, though looking to marry for a title like her sister Pearl, is far too innocent and principled to be at all construed as “deplorable” (Nestruck’s word) and Catherine McGregor’s Princess della Cercola is a rare character so charming, kind and legitimately ladylike that she’s actually, although a crucial presence, less interesting than those more amusingly wretched.

To me, Our Betters seems no less relevant to Our Times than anything else in this very typical Shaw season (everything in period, most things in Britain, almost nothing thematically related to anything else beyond “look, everyone’s in the Salvation Army!”).  Panych underplayed his hand a bit when it came to interpretation (the shadow of his excellent marriage of tradition and invention for 2011’s The Admirable Crichton looms large here I think) but, while Our Betters is very much a product of its unique time, the story and characters have a universal enough feel that I (a young person very much a product of My Time) didn’t have to strain particularly hard to relate. Our Betters is about the superficial things we let lead us towards faulty relationships (titles may not be what they once were but I would argue that they’ve just been replaced by abs and good hair), it’s about status and convenience-based friendships that we have no business maintaining but do anyway, it’s about following our heads over our hearts in unhelpful ways, and it’s about the ways we hurt each other sometimes just because we can. If Nestruck can’t relate to those things then I think he might have discovered the secret to eternal happiness (though somehow I doubt it).

Consider this: by allowing the Duchesse’s horrid clinging and infuriating emotional manipulation to all but eliminate her sympathetic moments, the character of her shameless boy toy Tony (the gallant Charlie Gallant working the exasperated cad perfectly) gains some unlikely relatability there is no way he otherwise would have had (and Laurie Paton is good enough to muster some honest sympathy for her character come Act III, no matter how annoying she is earlier on). A shred of humanity in Tony gives an extra shred of humanity to Pearl, and so on and so forth. Claire Jullien is so utterly charming that, however dreadful, her leading lady’s place at the centre of the stage seems fitting. It’s then fascinating to see how she falls off then grapples her way back onto that pedestal. Bessie’s disillusionment with her sister (and how it relates to her worldview) is the key arc of the play. For her to react so harshly requires that either Pearl be at least somewhat monstrous or Bessie be massively judgmental. I’m much more comfortable with the former.

I think perhaps Nestruck’s problem actually lies less with the unlikeable women and more with the extremely likeable men. We never meet most of the Brits the central women have married for their titles (we only meet the men they are gallivanting with while their husbands are away) but we do meet two young suitors contrastingly courting the affections of Bessie- a potential Pearl in training. The titled young man whose eye Bessie has caught because of her massive dowry is Lord Bleane and he is lovely, sweet and self deprecatingly awkward as played by 2012 My Theatre Award winner Ben Sanders. This is a problem for Nestruck who believes that the negative characterization of Pearl (our central title-grabber) and the positive characterization of Bleane (the most prominent of on-stage fortune hunters) are representative of some grand message that shady women are shadier than shady men. But Pearl is alone in her female wickedness just as Bleane, among the London-living men, is alone in his male goodness (The Duchesse, while obnoxious, is merely pitiable and both Bessie and the Princess are every bit as well presented as Bleane. Thornton, Arthur and Tony, on the other hand…).

The other romantic figure in Bessie’s orbit is her American childhood sweetheart Fleming Harvey whom she has thrown over in favour of English court life but who has come to visit her in London anyway. Fleming represents the audience’s voice of disbelief at witnessing the comi-tragic underbelly of the Americans in London Aristocratic culture. If Maugham is favouring a viewpoint, it’s Fleming’s critical American one and the casting of the ever-winning Wade Bogert-O’Brien in the role further signals to the audience that he’s the smart and morally centered figure with whom we should stand. He’s a lovely character as written (that speech about his attempts to make his feelings as unobtrusive to Bessie as possible is just beautiful) and the charming actor plays him with sure-footed smarts and babyfaced sincerity.

As the play begins, Bessie is living with Pearl and contemplating (though not yet accepting) the advances of Lord Bleane (whose ultimately worthiness is as of yet unapparent). Her journey towards staying with the Princess and rediscovering Fleming in the end feels almost age-old rather than distinctly stuck in the early 20th century. Our Betters is amusing in an unmemorable but charming way and is even, at times, quite touching. The costumes and sets are beautiful (if a bit dull) and the cast one of the most likeable of the season. It’s not the sort of thing that should have courted any controversy at all. It’s not brilliant (and Panych was certainly underdoing himself in his approach) but it’s not even close to bad and it’s certainly not offensive or irrelevant. It’s just a very Shaw Festival-y production with all the good (pretty costumes, witty banter, strong young actors) and bad (period everything, innovation-light direction) that comes with that.