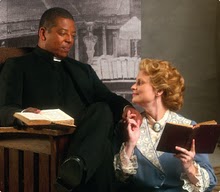 At the Shaw: Candida

Candida is a play that is both fascinating and a little dull at the same time. It’s an inconsequential marital squabble that goes on a bit too long and contains perhaps a bit too much philosophizing on the meaning of love and marriage. It’s also revealing and engaging as a social study and a question of spousal selflessness. The production at The Shaw Festival this year is also all these things: predictable and dull some times, thoughtful and endearing at others. It features a middling performance or two but also a star turn from its youngest player.

Director Tadeusz Bradecki, like all directors at the Shaw it seems, stages good-ole GB’s play in traditional, boring manner and leaves it very much up to his cast to make an impact. Luckily for him, Bradecki is working with one of Shaw’s more accessible and least preachy/annoying texts and he’s cast it impeccably for the most part.

Krista Colosimo brings a lot of life to the small role of Miss Proserpine Garnett and Nigel Shawn Williams is fine as Reverend James Mavor Morell, tasked with delivering some silly socialism and a bit of “but she’s my wife!” whining, but they’re both easily upstaged by the production’s two stars. Claire Jullien is lovely in the title role; her loving, motherly manner is just entrancing enough to lend credence to the “everyone loves her madly” central plot. But this is Wade Bogert-O’Brien’s play and he owns every minute of it. The superb young actor’s performance as the lovelorn Eugene Marchbanks is so exuberantly loving that I couldn’t imagine any audience member not adoring him. Bogert-O’Brien makes the big moments work but it’s the small ones when the focus is somewhere else that really make him stand out. In his silent heartbreak, Marchbanks becomes the full grownup human being that his monologizing covers up. It’s a spectacular performance from one of the festival’s youngest and most promising talents and it’s what really makes Candida work as a whole production.

Candida plays at the Royal George Theatre in Niagara-on-the-Lake until Octorber 30th.