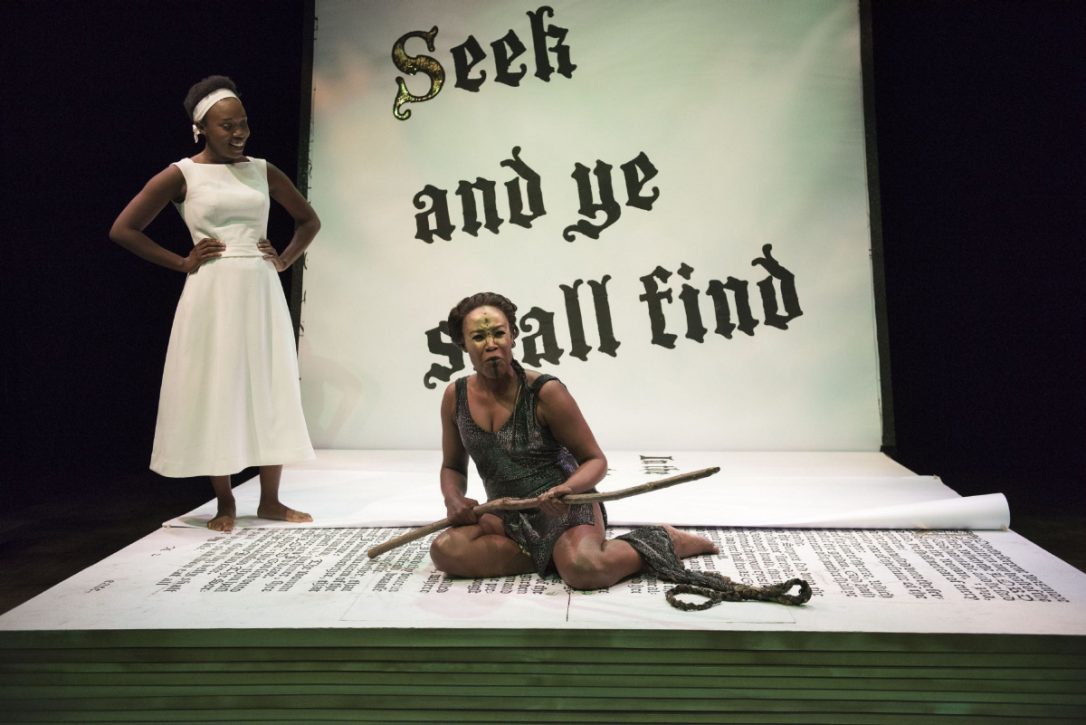 The Adventures of the Black Girl in her Search for God
In commissioning Lisa Codrington to adapt Shaw’s short story about a missionary-raised black girl searching for meaning in the African jungle, artistic director Jackie Maxwell kills a whole host of important birds with a single stone: 1- Find a memorable and entertaining one-act for the lunchtime slot. 2- Showcase a lesser known piece of GBS’ writing at his namesake festival. 3- Debut an original work by an up-and-coming playwright (importantly a “black girl” re-appropriating the story). 4- Feature artists of colour both onstage and behind the scenes (the play is directed by Canadian director of the hour Ravi Jain). 5- Break the living room drama formula with something less linear and more absurd. 6- Spotlight the festival’s most exciting new young actress since Jennifer Dzialoszynski in 2013 (Natasha Mumba in the title role) . 7- Give Jonathan Tan something interesting to do (he’s too good for his usual musical ensemble roles and here he steals the show as Jesus). 8- Inspire Camellia Koo’s creativity with non-literal set requirements. 9- Remind everyone how delightful Tara Rosling is when allowed to be silly. 10- Party hats. The ending is far too abrupt but The Adventures of the Black Girl in her Search for God accomplishes so much before it’s so suddenly cut short.

A Woman of No Importance
I was tempted to classify this well acted but forgettable mainstage production as a drama but its Oscar Wilde-ness and the delicious glee of Diana Donnelly’s performance as Mrs. Allonby insisted on “comedy”. Eda Holmes has become the festival’s one true no-fail director and the dependable strength of both this and her take on Mrs. Warren’s Profession this year further solidify that fact. This is, however, probably her least interesting work in years with none of her trademark movement or inventive frames. Michael Gianfrancesco’s costumes steal the show though the cast is a tough one to upstage with the sort of mind-blowing bench depth that gives 3-line roles to the likes of Thom Marriott and Ric Reid (in his smallest role in many years, Jim Mezon is oddly the best I’ve ever seen him). Fiona Byrne plays the title role with great dignity but, while both their performances are charming and nuanced, I couldn’t get past the utter absurdity of *spoiler alert* Martin Happer playing Wade Bogert-O’Brien’s father (often cast as peers, there can’t be more than a handful of years between them). The best thing in the festival theatre by a mile and a decent enough offering in a rough season but nothing to write home about.

The Dance of Death
Another play that may or may not actually be a drama, I decided this odd Strindberg bore is best thought of as a black comedy because it’s far easier to stomach these alienating characters if they’re meant to be laughed at rather than cared about. Patrick Galligan is, as always, a total delight while Fiona Reid does that static Fiona Reid thing she does in the performances between her brilliant ones but she has a few shining moments of human hilarity as an unhappy wife trapped with her awful husband in a tower that I was hoping would turn out to be something interesting like a prison or purgatory but is, in fact, just a damn tower. There is nothing else to report here. Oh, newbie Landon Doak does some good marching.

Engaged
I sometimes think I see too much theatre. I’ve gotten jaded and grumpy, often finding myself frowning in theatres full of laughing people, thinking to myself “only another hour or so, then this will be over”. What did the packed house at this colourful farce see that I didn’t see? They were delighted by Morris Panych’s gigantic direction and Ken MacDonald’s tacky design; they didn’t seem bothered at all by the criminally imprecise and unintelligible Scottish accents; no one appeared to care just how massively this ridiculous script wastes its stacked cast, estimable talents like Gray Powell, Nicole Underhay, Mary Haney and Martin Happer reduced to nonsensically flailing cartoon characters (don’t even get me started on the non-role played by the genius Ric Reid). Only Diana Donnelly is able to charm her way to a few genuine laughs with a surprising line delivery or two, there is otherwise basically nothing to recommend this absurd exercise in apparently crowd-pleasing idiocy.