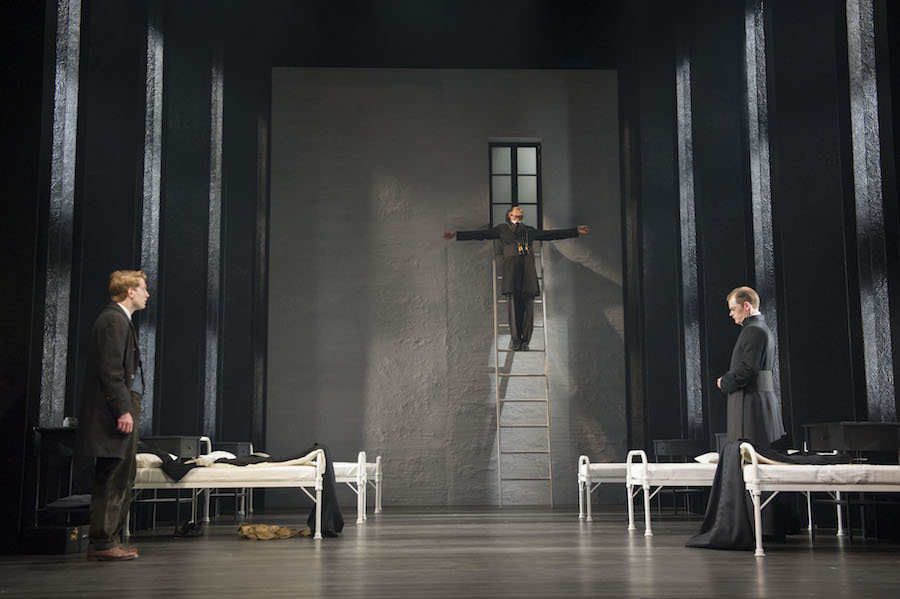 The Divine: A Play for Sarah Bernhardt was the last production I saw this year at the Shaw Festival (I’m reviewing out of order because this simply couldn’t wait). Before I saw this world premiere (four years in the making by Quebec playwright Michel Marc Bouchard and translator Linda Gaboriau), I was already considering the possibility that 2015 might be the Shaw’s strongest season since I started reviewing. I’d already seen quite a few productions I absolutely loved (The Twelve Pound Look, Peter & the Starcatcher, IHO), many I really enjoyed (Pygmalion, You Never Can Tell, Top Girls, The Lady from the Sea) and only two things I disliked- one for inelegant execution (Light Up the Sky) and one because I just don’t think it’s a very good text (Sweet Charity; ugh, Sweet Charity). It was a really great season full of strong themes, superb performances and far more bold direction than I’ve ever seen at the usually very conservative festival. In my estimation, the Shaw was beating a very weak Stratford season by a landslide even before I stepped foot into my final show of the season; now there isn’t even a question.

The Divine is a revelation, a marriage of bold new work and insightful direction & design with utterly perfect casting. I’ve long maintained that one of the Shaw’s most underrated strengths is their stable of young men, highlighted by (among others) Wade Bogert-O’Brien and Ben Sanders. Here they headline The Divine with a complementary pair of deeply moving performances as young seminarians in conservative Quebec City, 1905 when outspoken stage legend Sarah Bernhardt shook up the town. In the role of said legend, director Jackie Maxwell has, naturally, cast the closest thing the current Canadian theatrical landscape has to such a legend- Fiona Reid, whose heightened grandeur contrasts perfectly with the darker naturalism of the mens’ performances in a play that miraculously blends big laughs with the sort of traumatically emotional drama from which it’s difficult to emerge unaltered.

The audience’s somewhat meta window into this world comes from Sanders’ Michaud, an aspiring playwright whose privileged background and great love of fiction have sheltered him from having to really look at the world. Inspired by his idol Ms. Bernhardt, he attempts to understand a world outside of his own by taking his new roommate Talbot (Bogert-O’Brien) as his subject. Talbot is the dutiful son of a poor factory worker (Mary Haney) and the tender older brother of Leo (Kyle Orzech in a breakout performance) who, at the age of only twelve, has joined his mother at the factory to help put his big brother through the seminary in the hope that he can make a better life for all of them. But Talbot is also rebellious, resentful and stoic, damaged so deeply that, when embodied by Bogert-O’Brien, the boyish actor’s usual light appears to disappear completely. He’s scarred by tragedy, infuriated by circumstance and he stands in harsh, illuminating contrast to Sanders’ heartbreakingly innocent Michaud, whose tragic disillusionment and heroic awakening forms the backbone of Bouchard’s ambitious story

Standout performances in smaller roles come from the indomitable force that is Catherine McGregor as a furious factory worker and the great Martin Happer who contrasts his turn in Peter & the Starcatcher as the goofiest character of Shaw 2015 with a treacherously enigmatic performance as the soft-spoken and threatening Brother Casgrain. The set (designed by Michael Gianfrancesco) is stark, hard lines in black and white that turn to a landscape of grey when hit by lighting designer Bonnie Beecher’s thrilling shadows (her lights are beautiful but it’s her shadows that really make an impact).

At the helm as both director and dramaturg, Maxwell does some of the best work of her career, carefully navigating the tragi-comic balance of Bouchard’s devastating and challenging script. She deftly captures the contrasting tones of the piece, crafts specific unshakeable marquee moments and artfully deploys silence and small gestures as her principal tools to convey power, intimidation and defiance. It’s a beautifully restrained and insightful directorial turn that is the cherry on top of Maxwell’s superbly programmed penultimate year as artistic director of the festival.

If you miss The Divine, you’ll have made a sorry mistake. It plays until October 11 at the Royal George Theatre in Niagara-on-the-Lake. Click Here to book your tickets.