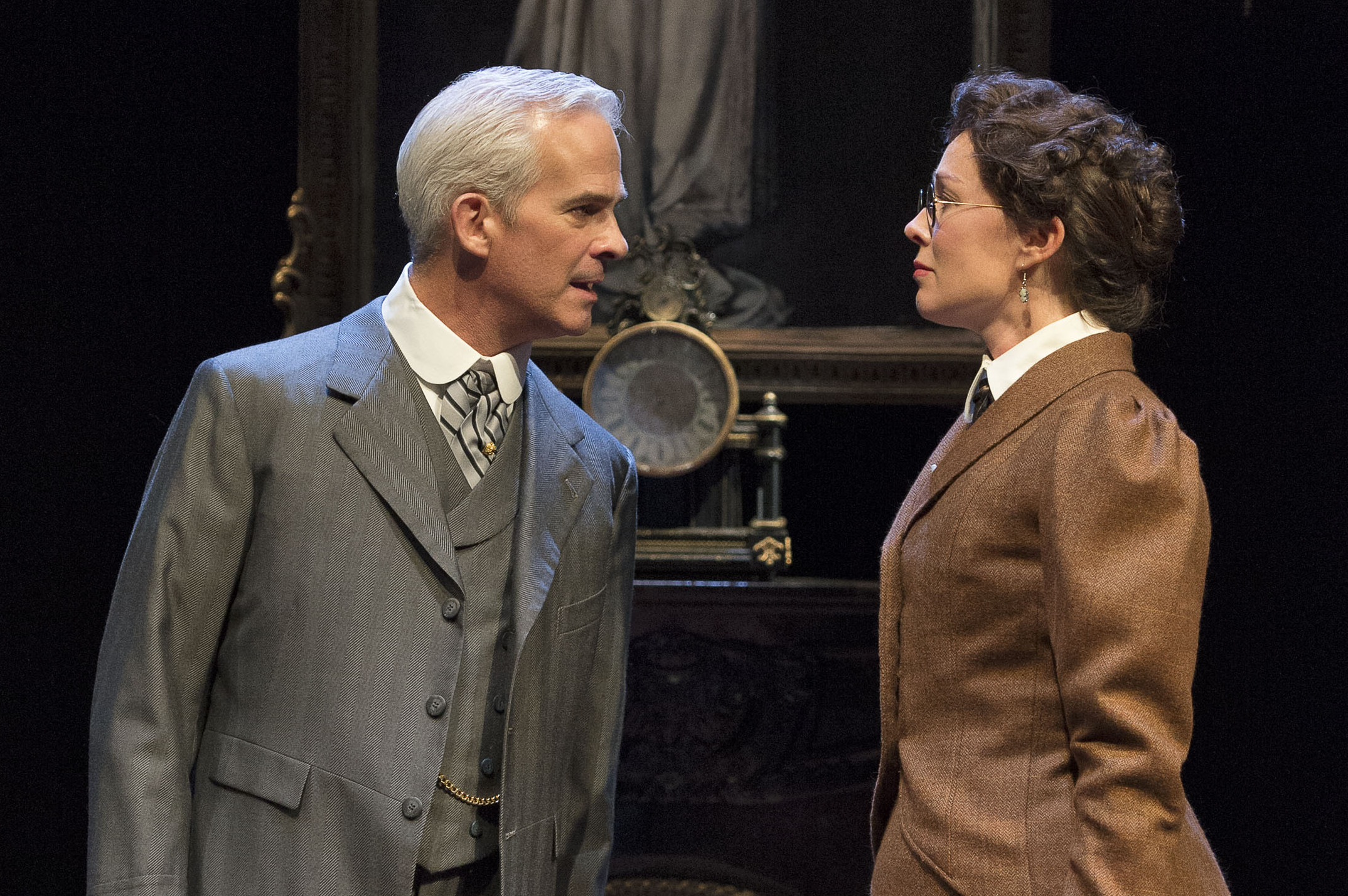 At the Shaw: The O’Connell One-Acts

The Stratford Festival is having some women issues this year with a season that includes a dispiriting number of plays with misogynistic themes and not enough female-led works (though the late openers may help matters, hopefully). In contrast, at least in my opinion, The Shaw Festival is killing it on the female front despite the gender limitations of their nineteenth century mandate. Top Girls is self-explanatory and Peter & the Starcatcher may have a cast of mostly men but its fierce and formidable hero is a young girl. Even Sweet Charity, despite that horrific ending, has a feisty, plot-driving woman at its centre. You Never Can Tell‘s discussion of “New Women” is dated but at least it’s a conversation that’s being had. Two of the strongest examples of this year’s strong feminine influence share a leading lady, Moya O’Connell who packs full-length punch into two one-act plays.

The more delightful of the two is Lezlie Wade’s swift and funny lunchtime production The Twelve-Pound Look. Running barely over a half hour, this JM Barrie treat is refreshingly focused, with only Neil Barclay and Harveen Sandhu’s pointless musical introduction to distract from the heart of the matter. The plot is simple but the dynamics complex- Harry Sims has been chosen for knighthood but his day is ruined (to borrow a phrase) when the woman he’s hired to compose the replies to his many letters of congratulations turns out to be his ex-wife Kate, who left him unceremoniously after having proven to herself that she can independently earn enough money to pay for her typewriter (twelve pounds). Kate is my favourite kind of role for O’Connell- spirited, warm and wryly funny, using the actress’ regal presence in unexpected ways. Contrasted with Harry’s jewel-draped young wife (a charming Kate Besworth whose wide-eyed youthfulness is only heightened by the awkward fact that here she’s playing the wife of the man who is playing her father elsewhere in the season), Kate is plainly dressed and lowly stationed but O’Connell brings a blazing confidence and indefinable elegance to the role that perfectly illustrates the power of Kate’s independence and resulting contentment. Patrick Galligan impressively sheds his natural charm and sweetness to play Harry with the perfect mix of pomp and angry insecurity, hilariously provoked by the teasing pride of O’Connell’s wry performance (the way she raises her eyebrows to proclaim she earns twice what he imagines, little though that may be, is simply perfect). Uproarious and uplifting, The Twelve-Pound Look is the Shaw Festival at its best.

Playing on similar themes with a darker tenor, Ibsen’s The Lady from the Sea, adapted by Erin Shields into this 90 minute incarnation (with straightforward direction by Meg Roe and a starkly simple but startlingly effective set by Camellia Koo), features O’Connell as a restless wife and stepmother looking for (rather than reflecting on) her way out. Or, rather, she’s contemplating whether a way out is what she wants. The metaphors are a little heavy handed but the dilemma is clear- does she choose the stability of her doctor husband (a sympathetic though underused Ric Reid) despite feeling out of place on land or does she return to her mercurial and mysterious love, the sea (personified in the alluring form of Mark Uhre as a fugitive sailor)? Those extra 60 minutes necessitate a few subplots that either support (Kyle Blair’s Hans and his obtuse views on wifely duty), parallel (Andrew Bunker and Jacqueline Thair’s excellently tentative dance around courtship and educational aspiration; Andrew Bunker, one of the most consistent and underrated players at the festival) or mildly complicate (Darcy Gerhart’s sweetly confrontational desire for her stepmother’s affection) the decision faced by O’Connell’s landed sea creature Ellida. Here, without the humour or happiness of Twelve-Pound Look, O’Connell’s unspoken grandeur makes her hard to connect with. That’s not necessarily wrong, especially considering that both Reid and Gerhart’s characters share the audience’s struggle in this regard, but it keeps The Lady from the Sea’s philosophical contemplations purely intellectual, engaging the head but perhaps missing the heart.