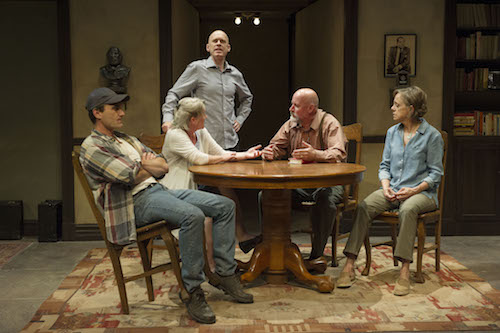 At the Shaw: IHO

The full title of the Shaw Festival’s latest studio theatre offering is almost as long as its running time (a whopping 3 hours and 50 minutes): The Intelligent Homosexual’s Guide to Capitalism and Socialism with a Key to the Scriptures. Besides the fact that most plays in the studio have no intermission and this one is so long it needs two, the play heretofore referred to as IHO is the perfect fit for the Shaw’s one ‘hip contemporary play’ slot . The studio is where the company does most of the work that really shows them off as a competitive, modern institution. There’s always a gem or two on the mainstages as well (this year there are many)- a rare surprising text discovered buried in the confines of the period mandate or an overdone classic boldly reinvigorated by Peter Hinton– and this second-to-none acting company almost never fails to deliver (we’ll talk about Light Up the Sky at a later date) but the studio is where the Shaw artists really go for it, shedding the comfort of their perfectly tailored period costumes and their incredibly precise British accents to tackle a text the subscribers probably haven’t seen before. The studio is where they swing for the fences so it’s also where they usually score big.

The official line on the studio is that it’s home to modern pieces that show Shavian influence or explore Shavian themes, though that line has been known to get a little blurry (I still don’t think the MyTheatre Award-wining Arcadia needed to be in the studio when it might have even sold out the bigger houses). But IHO is right on point. Playwright Tony Kushner, with his closely held political ideals, wild intellectual ambition, and fast-paced wit, is a clear descendent of the festival’s main man. IHO borrows its title from a pamphlet Shaw wrote called “The Intelligent Woman’s Guide to Socialism and Capitalism” and a production of Major Barbara is up for discussion in the play’s opening scene. At this point in our theatrical history, the work of George Bernard Shaw has become safe and, at worst, stiff. It’s classic and mainstream now so it’s easy to forget that, when it premiered, it was brash and new and even a little bit intimidating. So while the work of Tony Kushner sticks out like a sore thumb in the Shaw Festival’s world of corsets and manners, IHO might actually be the most insightfully Shavian piece of programming this season.

It also happens to be a knockout production, the sort that demands not to be ignored despite its small house and short run. Director Eda Holmes has long been a favourite of mine for her careful balance of thoughtful creativity and relatable commercialism which she channels here in the form of a relatively simple staging of a play so complicated and busy that it needs as much clarity as she can possibly bring to it. Peter Hartwell’s practical set facilitates great movement and beautifully easy transitions, creating much-needed breathing room in the text-heavy show as each character exiting the house doesn’t just exit the set through the upstage hallway but re-emerges out the visible front door to truly walk away from the Marcantonio household and all its troubles.

Kushner’s story is about communism and real estate and suicide, prostitution and homosexuality and parenthood, but really it’s just about a family at a particularly aching time of their lives. Patriarch Gus (a blustering Jim Mezon) wants to commit suicide and also sell the family brownstone, not necessarily in that order. His quietly strange sister (Fiona Reid, glorious and unexpected) has called his three adult children and their respective plus ones home to Brooklyn for an emergency summit on both matters. An elaborate backstory is outlined in the program notes with family-shaping events dating back as far as 1892; it’s not necessarily a mandatory read but so much of the outer conflict and inner resentment at play between the Marcantonios is rooted, as it is in real life, in incidents from last year, five years ago, 38 years ago- mentioned missably in throwaway one liners and overlapping arguments- it’s very easy to get lost in the squabbles.

What’s impossible to miss is the depth of these characters and the complexity of their relationships, embodied masterfully by a truly mesmerizing ensemble of the festival’s best players. Perfection is impossible so I have to mention that I never quite connected with Mezon’s uneven Gus and Jasmine Chen’s Sooze arrives late and never quite catches up, in contrast to Julie Martell’s perfectly understated Michelle who arrives even later and lives an entire life in a single scene. Reid’s character of Clio speaks rarely but captivates completely in a chameleonic turn from one of Canada’s most revered leading ladies. Many of the performers here are playing against type and disappearing completely into said new roles. MyTheatre Award Winner Ben Sanders walks a tightrope of irresistible sexual confidence and scared vulnerability as a young, over-educated prostitute (it should be noted that his other role this season is a priest) while very physical performers Diana Donnelly and Andre Sills battle it out for scholarly superiority as verbose theologians. The great authority Thom Marriott’s majestic voice naturally lends him brings an extra note of missed-potential sadness to his beautifully empathetic performance as the cast-aside former son-in-law who lives in the basement and can’t let “his family” go.

Career-best performances are everywhere in IHO but none so powerful as from the leading trio of siblings. The eldest is Pill (Steven Sutcliffe), a conflicted and restless history teacher torn between his husband (Sills) and the lover he can’t leave behind (Sanders). The youngest is Vito, the lone worker in a household of intellectuals (even his longshoreman father hasn’t worked for his “guaranteed annual income” in decades). Played by the impossibly brilliant Gray Powell, Vito is a deeply moving collage of closely held sadness, practical bluntness and explosive rage. But it’s Kelli Fox as the middle daughter who delivers the performance I’ve been completely unable to shake. A labour lawyer by way of nursing (“doctors are management” she says to explain dropping out of med school), a discontented lesbian by way of a marriage that didn’t fail to a man who will always love her, a reluctant mother-to-be by way of her brother’s sperm and her partner’s egg, Empty (“Maria Theresa; M-T”) is at once the most together member of the family and possibly the most lost, her idealism and her practicality locking horns as she battles to just keep moving forward. Fox is extraordinary in the role, natural and complex and nuanced as if she’s never been anyone but Empty in her entire life.

The Intelligent Homosexual’s Guide to Capitalism and Socialism with a Key to the Scriptures is complicated and wordy. It’s filled with politics, history, theology and personal subtext the entirety of which is impossible to grasp on first viewing (even if you’re improbably well-versed in the specialty of every single expert character, you’ll still miss half the dialogue in each of the many overlapping arguments) but the human beings at the heart of the play ring perfectly true thanks to the clear vision of Eda Holmes and the absurd talent of her incredible cast.

IHO is what you go to the studio theatre for, it’s why the Shaw Festival has a studio theatre, and I can think of no better place to spend four hours of your life. It plays until October 10th; Click Here to get your tickets now.