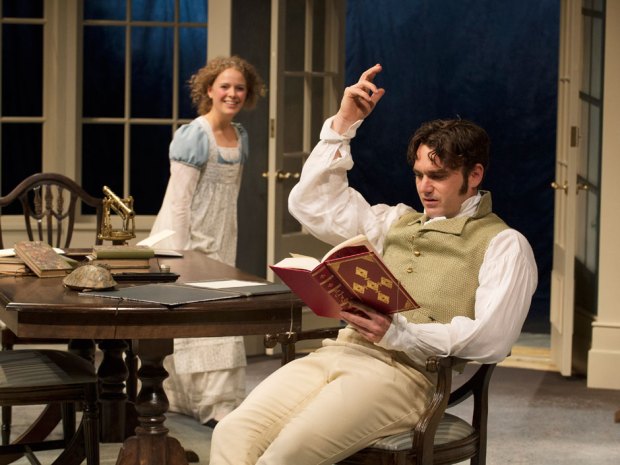 Tom Stoppard’s Arcadia is a genius text written by a genius about geniuses. It gets better every single time I read or see it and The Shaw Festival’s 2013 production easily continued that trend.

The play is complicated and rewarding but also fun and diverting. It’s filled with scholarly concepts the full range of which no one person can be expected to fully understand (I suspect that most people grasp either most of the Byron stuff and little of the mathematics or the other way around). The intricate, multi-generational plot comes together like a puzzle but it does so with enough complication, rich characters and challenging concepts that a return trip retains all of the wonder of your first experience in Arcadia, even if you know the incoming twists.

Eda Holmes’ Shaw production just closed its too-short run in the Studio Theatre, the official line being “The Studio Theatre is where we stage works by contemporary Shavian writers – those who revel in provocative, subversive playwriting – and the inheritors of Shaw’s legacy”. But the effect is that the best show of the season sold out its small house too quickly and this arbitrary rule kept this great play away from audiences who should have seen it. That said, the Studio space is a nice one (if you’re lucky enough to get a ticket) and the convertible stage was used to great effect with the audience positioned in a semi-circle around Sue LePage’s simple rounded set, as though the importance of time in the play was being punctuated by the action taking place on a clock face (though with nothing quite as explicit as actually painting a clock face on the ground). LePage’s costumes were also beautiful, especially the men’s period dress that turned Gray Powell into a dreamy sort of Darcy-looking figure.

Powell’s Septimus was the highlight of the great production, as expected. Septimus is pretty much always the highlight of Arcadia, being one of the most fantastically bright, interesting and tragic characters in contemporary theatre. Powell is pretty much always the highlight of whatever production he’s currently in, being one of the most thoughtful, engrossing and nuanced actors in Canadian theatre. The marriage was a beautiful one. Powell’s intensity was livened by Septimus’ wit and occasional playfulness, the character’s subtext given emotional honesty and entrancing inner life by the actor’s natural embodiment. In my opinion the best scene of Arcadia is the first one, wherein the audience is introduced to Septimus and his prodigious pupil Thomasina Coverly (played by the fully adult Kate Besworth with the precocious wonder she’s a particular master of). The unlikely pairing came together in this production with fascinating chemistry that was kept in exactly its right place for exactly the right times, navigating some of the play’s moral trickery brilliantly.

The rest of the cast slowed down the proceedings a bit but remained top-notch (Arcadia is pure brilliance in its dealings with Septimus and Thomasina, merely excellent in all other scenes). The delightful Nicole Underhay (plenty more on her to come in my Major Barbara review) played Lady Croom cheekily while Andrew Bunker’s snivelling twit of an Ezra Chater (poet, botanist, not much of either) was the perfect performance of a troublesome character who has only one scene to distinguish himself before being talked about for the remaining two hours of the play. I’ve always thought that there’s a bit too much of the destructively ambitious scholar Bernard Nightingale in the play but Patrick McManus brought enjoyable energy to the part and played off of Diana Donnelly’s charmingly exasperated Hannah Jarvis excellently (Donnelly in a chameleonic departure from her thrillingly funny turn as Liberty Bell Browning in the wackadoo Peace in Our Time). Martin Happer is perhaps a bit too old and full of leading man stage presence to play the awkward math whiz Valentine, but his stoically smart take on the character made it work somehow. Harveen Sandhu annoyed me a bit as the modern day Chloe Coverly with her practiced accent and wild gesticulations but, for the most part, the cast filled out their smart and complicated roles triumphantly.

Holmes didn’t mess with Stoppard much, adding little in the way of large interpretation or notable directorial moments beyond giving Septimus a bit of a pyro motif to foreshadow the ending. But Arcadia is still a relatively new play; its author is still alive and most audience members would have been coming to it fresh (though at my performance most patrons I heard around me sincerely wished that they had read it and spent some time on Wikipedia beforehand- algebra, Byron, 19th century landscaping, hunting practices among the Aristocracy, the second law of thermodynamics!). There’s little need to go about editorializing the already complicated piece this soon in its history. Stoppard created something really special and there are millions of people who haven’t seen it yet, so all Holmes needed to do was cast the right people to let the text be the best version of itself and attempt to fit as many seats into the Shaw Festival Studio Theatre as possible. And that’s what she did, to mesmerizing effect and acclaim.