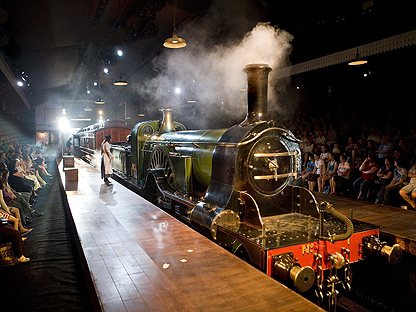 Toronto Welcomes “The Railway Children” with Awe and Ennui

The stage adaptation of E. Nesbit’s story The Railway Children (onstage now with Mirvish Productions) is all bells and train whistles with very little to sustain it. The relatively small story feels like it takes hours to tell as the cramped audience waits patiently for the inevitable conclusion, or at the very least for the storied real working train to make its appearance.

To give credit where credit is due, that “real working train” is very impressive. It’s visible for all of 4 minutes but they are indeed 4 very impressive minutes. Also impressive are the (rather ingenious, actually) moving platforms that make up the set. Pushed along by rough-looking stage hands dressed as anachronistic railway workmen with an even more thankless job, the ever-changing platforms allow the play a little more excitement than it otherwise could muster (it’s also a nice homage to the time when scenery really was hoisted about by sailors with ropes and pulleys). The costumes are also particularly fantastic.

The cast is fine, generally. Emma Campbell is lovely as the mother, very sympathetic and desperately strong. And though Craig Warnock’s words sometimes get lost in his thick Mr. Perks accent, he is quite good as well. I saw Natasha Greenblatt sub in for Sarah English as Roberta, the eldest of the titular children, and she was pretty good, but both Roberta and Harry Judge as Peter are completely overshadowed by their delightful youngest sibling, Kate Besworth’s Phyllis. In a dreary production, Besworth is a breath of fresh air. The play is too long, the story predictable, the concept of adults prancing around as children, frankly, irritating. But Besworth doesn’t just cope in the circumstances, she thrives, making me forget that she’s any more than 8 years old and the most endearing creature on the planet- all trouble and good intentions.

But she is where the thrills stop. There is no surprise in The Railway Children, no real moments that stir anything but ennui. Roberta’s big “Daddy, my daddy” squeal comes, perhaps, the closest, but the only effects of that are the stirring of sense memory when sitting next to your dad, who is liking the show a lot more than you are- because there’s a train, “Kelly, how do you think they did that thing with the train?!”.

That is, really, the question of The Railway Children. I don’t think you’re really supposed to care that the children are reunited with their father or that Mr. Schepansky makes it home or that Mr. Perks learns to let go of his pride (if you are, then this show really needs a lot of work). I think, in this production at least, what they’re after might just be those gasps that surely come every performance when the big steam engine rolls through the theatre. “How did they do that?” That’s what they want you to ask. And night after night, I’m sure they get their wish.