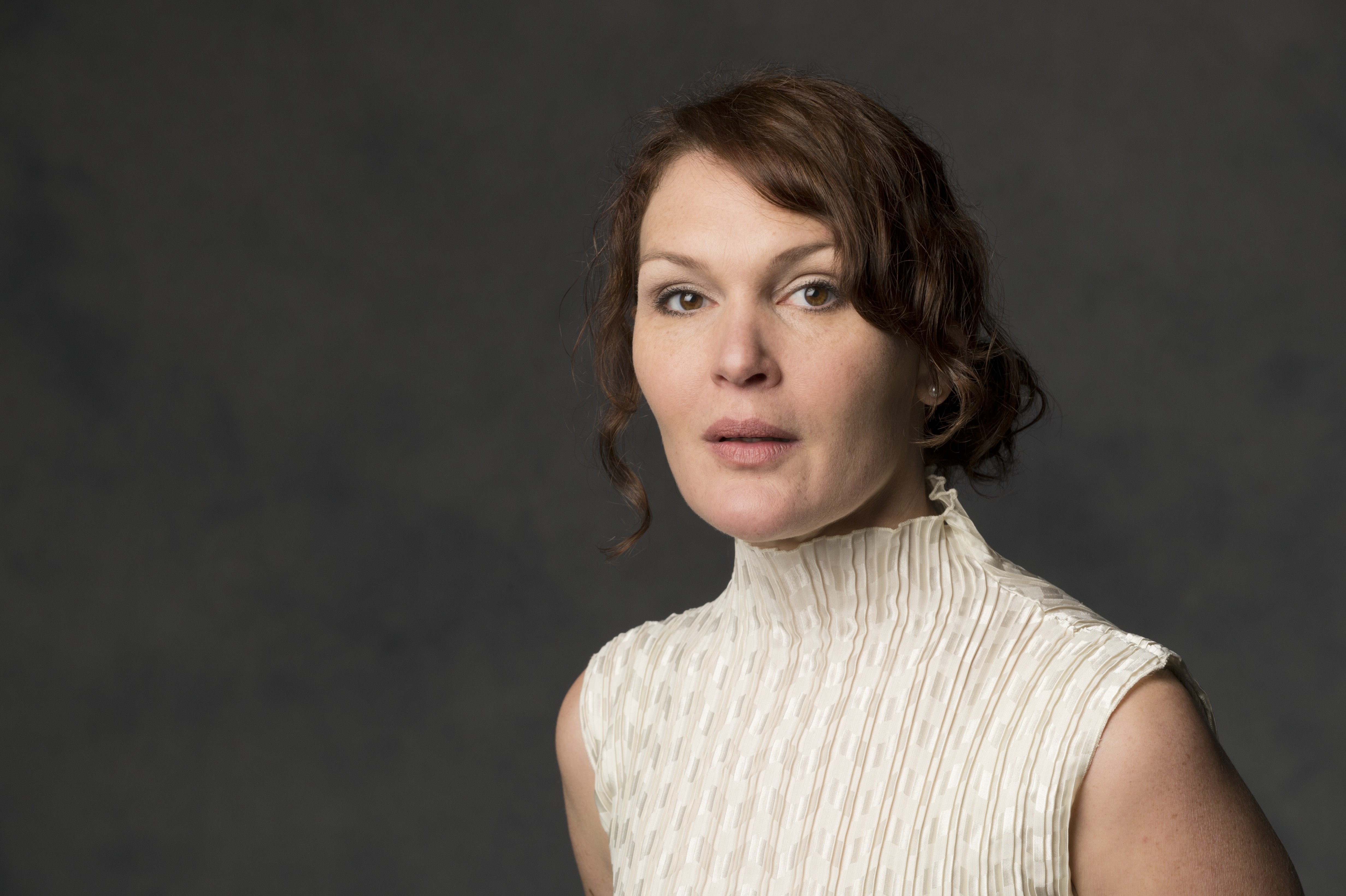 Shaw festival stalwart Tara Rosling contrasted a larger-than-life performance as the legendary Patient Griselda in act one of Top Girls with a heartbreaking naturalistic turn as a wounded woman in the second act in one of the most versatile performances of the year, earning her her second Outstanding Supporting Actress nomination.

Can you remember your first experience with theatre? When did you know you wanted to become an actor?
I vividly remember one of my first experiences seeing theatre. I was living in the Okanagan Valley when I was 7 years old and my mom took me and my brother to see Animal Farm at the Caravan Farm Theatre. It was magical — sitting outside in the dark on hay bales … I was transported to another place and positively mesmerized by the actors donning their amazing animal masks.

I knew I wanted to be an actor at 13. On a whim I asked for acting lessons, and my mother and grandmother gave me the gift of classes as a birthday present. I had a wonderful teacher who assigned us all monologues — mine was from Antigone. One day, while working on the monologue, I had the tremendous experience of being jettisoned into the present and of feeling tremendously empowered … that was it … I was hooked.

What have been some of your favourite roles you’ve ever played?
Oh my goodness … there are many …

I adored playing Margaret in Glace Bay Miners’ Museum (my professional debut), Annie Sullivan in The Miracle Worker, Laura in The Glass Menagerie, St. Joan, Catherine Sloper in The Heiress,  Mrs. Erlynne in Lady Windermere’s Fan, and Philomela in If We Were Birds.

Do you have any dream roles?
Well … I just started rehearsals for Alice in Wonderland at The Shaw — in which I have the great gift of playing the wee/huge lass herself! — [also] any opportunity to work with Peter Hinton is a ‘dream role’. I dream of sinking my teeth into anything Williams — yes (!), as predictable as it is, Blanche is up there. But I also adore the role of Hannah in Night of the Iguana.

You were nominated for your first MyTheatre Award back in 2013 for Enchanted April. What do you remember most about that character?
I remember reading the play for the first time and immediately being quite enamored with the character of  Rose …  how paralyzed she was by the grief of losing her child, and how, over the course of the play, she was able to move through and beyond her pain and “re-bloom”, so to speak.

Your MyTheatre Award nomination this year is for your role in Top Girls wherein you played both an icon of femininity and a very real woman. How did your larger-than-life role in the first act inform the more realistic performance later on?
One of the brilliant aspects of Caryl Churchill’s Top Girls is that ALL the characters inform each other — they echo, contrast, foil, illuminate, contradict, etc. Top Girls was a tremendously exciting, challenging, and ultimately satisfying play to wrestle with — it not only asks that the cast play multiple roles, but also that the cast move through non-chronological time, and play in more than one style (as you mentioned). I’m going to say that the playing of Griselda and Joyce were informed more by Churchill herself than by each other.

Fiona Byrne is also nominated this year for playing your estranged sister in Top Girls. How did you go about developing that connection that was both close and distant?
Ahhhh, Fiona Byrne … LOVE that woman! Top Girls was a very rare experience — the ENTIRE team was female — cast, director, design and stage management team — all women! Vikki Anderson was fabulous at fostering a rehearsal hall vibe of connection and celebration — an environment of intimacy was established right out the gate.

Within that environment, Vikki, Fiona and I engaged in a lot of discussion to establish a shared vocabulary and understanding of Marlene and Joyce’s history re: timeline, upbringing, and the circumstances surrounding Angie (Marlene’s daughter, whom Joyce raises) etc. Furthermore, Vikki invited Fiona and me to engage in some improvisations — to further inform our relationship. Beyond that, Fiona and I shared a dressing room and had a bit of a love affair really — I think due to our mutual respect for the play and love for our characters. The last scene was a definite highlight — both Fi and I treasured playing it!

What were some of the key things you discussed with director Vikki Anderson about the characters?
Top Girls is so epic in scope … what didn’t we discuss?! Key things? Well, regarding the first act, we talked a great deal about each ‘historical character’, and attempted to pinpoint why Marlene had invited this specific group of women to celebrate her promotion with her — i.e. what did each of them represent and why were they so significant to Marlene? As the play moved into Marlene’s place of work, we discussed the 80’s a great deal and what it was/is to be a woman working in a man’s world. And as the play moved into its last act, the discussion zoomed into Marlene’s personal life … specifically her very complicated relationship with her sister Joyce. This was the most exciting realm of discussion for me. Churchill doesn’t spell everything out … but rather, drops breadcrumbs as she goes. Then we are left to exhume the pieces of the narrative and attempt to make sense of the puzzle and find our way home, so to speak. We talked about the nature of sisters, what it is to be barren when you so desperately want to have a child, what it means to be tied to the homestead and preserving tradition when your sibling has abandoned all responsibility whatsoever; what it means to be poor and sacrifice your own ambitions; what it means to raise a troubled child who is not your own, what it costs to have political viewpoints which stand in opposition to your sister’s etc. It was all key to informing the intensely complicated dynamic of the final scene and, in turn, made the scene tremendously rewarding to play.

Top Girls had an all-star ensemble of some of the Shaw’s greatest women. Tell us a bit about working with the rest of your co-stars.
It was an amazing experience! I can in all honesty say that the entire cast got on like a house on fire. Every show we celebrated the fact that we were given the gift of telling the story of Top Girls as a collective. Lots of jokes, lots of dancing, and much laughter. An experience that I will cherish for many years to come.

Do you try and see every play in the season? What were some of your favourites of 2015?
I do try to see every play each season. This opinion is a little biased (as my husband played Henry Higgins), but I really loved Pygmalion. I thought the production was fresh, compelling, provocative, visually stunning, and the chemistry between Patrick McManus and Harveen Sandhu was spectacular. I also enjoyed The Lady from the Sea — again a fresh take on a truly great play in which Moya O’Connell, as Ellida, was wonderful.

What have you been up to in the off-season?
In the fall I participated in a fantastic local program called ‘Actors in the Classroom’ — working with a grade 7 class on monologues. It was a deeply rewarding experience that whetted my appetite for future forays into the world of education. Patrick and I demo’d and reno’d our kitchen … it looks pretty fab!  And then, we went on a family vacation to Costa Rica for the month of January with our daughter, Eliana. Not a too shabby off season!

What are you up to now/what’s next?
As I mentioned earlier, we’ve just begun rehearsals for Alice in Wonderland. I’m going to gush a bit … Peter Hinton’s adaptation is absolutely charming and so beautifully captures the whimsy and pathos of the Lewis Carroll original. Allen Cole’s music is stunning! Denise Clarke of One Yellow Rabbit is choreographing. I’m chuffed to the gills to be working on this production! My second show this season is the lunchtime — The Adventures of the Black Girl in Search of her God.

Do you have anything you’d like to add?
Thanks very much for the nod!