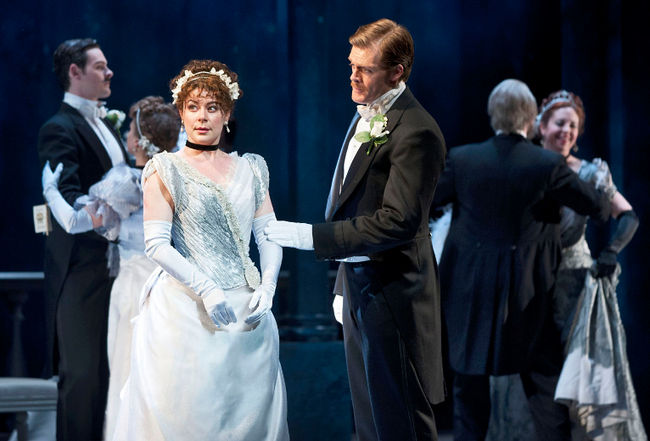 Lady Windermere’s Fan is the best production at this year’s Shaw Festival that is great mostly because of what the company has done with it. Oscar Wilde’s script is fun and full of giddy twists but it’s inventive director Peter Hinton (with an MVP assist from set designer Teresa Przybylski) who makes the production great with smart, fresh staging and the season’s most effective and delightful use of space (interlocking screens shift to reveal different spaces throughout Act I without stopping for blackout-scene changes).

The other MVPs come in the form of three of My Theatre’s steady festival favourites, and one unexpectedly great piece of casting. The former are Marla McLean as the titular ingénue, playing far smarter than most actresses would have in the headstrong and indecisive role, the always-great Gray Powell as the intense and lovelorn Lord Darlington, and Martin Happer as Lady W’s fantastically complicated husband. Perhaps the most strapping of the Shaw’s leading men, Happer commands the stage excellently as the authoritative Lord Windermere and holds his cards close to his chest when needed. It would have helped the plot along if I’d believed for a second that he was a little shady (Happer just seems so trustworthy, how could Lord W be a bad guy?) but the payoff that comes with believing in him makes Act IV somehow even more satisfying. Perfectly cast, Happer is the highlight of a really great production.

The final piece of the puzzle is the ever-dramatic Tara Rosling as a mysterious widow whose sudden presence wreaks havoc on the pretty lives of the Windermeres. I’m usually annoyed by the lack of naturalism in Rosling’s performances but she manages to find the emotion of Mrs. Erlynne underneath all her posturing and, in this specific case, the posturing fits her character and circumstances perfectly, casting a sketchy air of put-on glamour over the character.

Wilde’s play is an excellent puzzle with sharp plotting that rewards attention to detail. Peter Hinton’s production makes the text feel relevant, the emotion feel important, and he pulls off the astounding feat of staging a period piece in period and making it visually interesting. A true artistic success that’s also true to the Shaw Festival’s modus operandi.