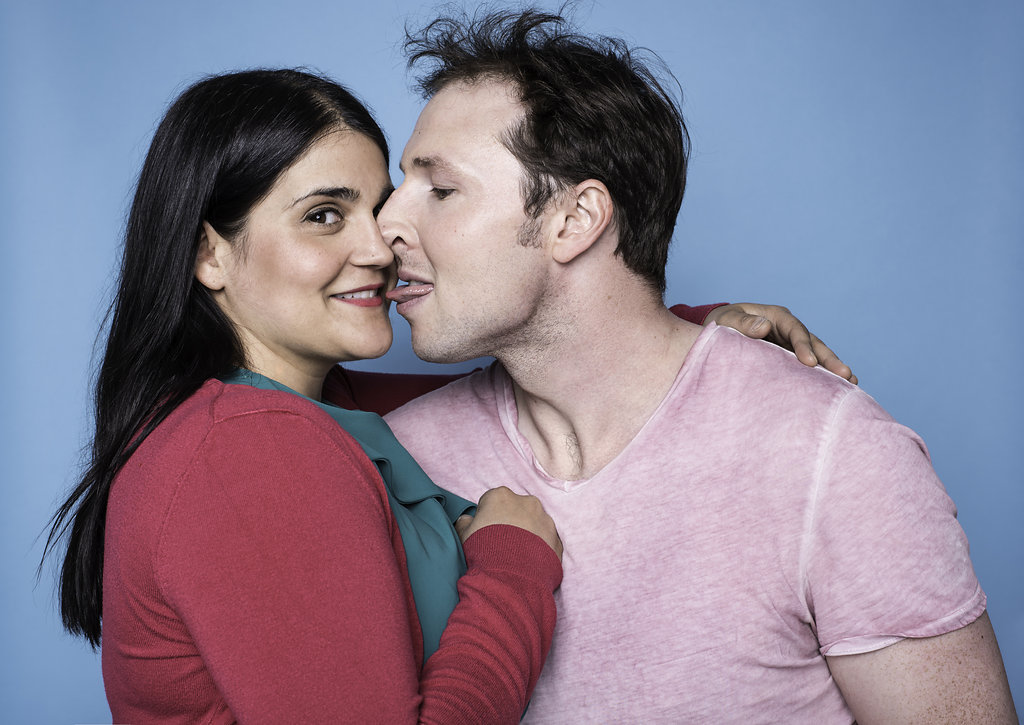 Cam Baby (A)
Jessica Moss doesn’t live here anymore; she’s in New York and somehow I’m just now noticing how much I’ve missed her work in the Toronto theatre scene. Moss’ signature style of quick-witted dramedy with personal themes is shared with some of the city’s other best young creators (Kat Sandler, Polly Phokeev, the Circlesnake collective) but her refreshing point of view is uniquely hers and thus sadly absent in her absence. The first non-solo Fringe offering from Moss, Cam Baby speaks strongly in Moss’ voice- sweepingly romantic, starkly honest, casually funny, deeply felt. Without Jessica Moss the actor on the scene, the play’s leading role is taken by Ashley Botting who finds the perfect balance of indignant fire and resigned self-deprecation. At first, I felt that Botting was a bit too pretty for the role of Clara- a woman declared by Karl Ang’s deliciously deluded Matabang and Andrew Cameron’s brutally average Joseph to be far too unattractive to be worth ogling- but the power of casting a perfectly decent looking person in the role of the declared “ugly girl” ultimately shines an even harsher light on the extremity of the men’s objectification and judgement. Botting is paralleled by 2015 MyTheatre Award winner Christine Horne as Natalie, a woman whose beauty makes Matabang and Joseph pay lots of attention to her and never really see her. Natalie’s extreme thin-ness is portrayed as the ultimate qualifier of beauty and, though the role is slightly under-written compared to Clara, Moss lends her thoughtful details (such as a highly specific favourite snack overweight Clara could never be seen eating) that combine with Horne’s warm performance to let the audience in on the reality that Natalie too, for all the praise she receives, is far more than she’s given credit for. The play’s wide thematic scope and character complexity is top notch, highlighted for me by Clara’s “I’m Not That Girl”-ish undervaluing of her fairytale connection with Brandon Coffey’s geek-dreamy Tim, her insecurities and jealousies and righteousness making her lament a world where she’s so dramatically undervalued by the likes of Matabang and Joseph rather than revel in the fact that the better man loves her for her. Cam Baby is a complex tour de dramedy force that touches on a hundred realities of being alive right now through the incomparable eyes of Jessica Moss, the theatrical expat I miss the most.

A Good Death (A)
Playwright Selley M Hobbs throws two strong-willed women of good intention and strong conviction together to face the worst of circumstances from opposing viewpoints in a stirring portrait of love, loss and the lengths we’ll go to for family. The resulting two-hander is profound, devastating and hauntingly relatable to both comedic and heartbreaking effect as the mother (Tracey Ferencz) and best friend (Laura Schutt) of an accident victim meet for the first time and pass a year together caring for their comatose loved one. Director Elizabeth Saunders brings a delicate touch to the nuanced story and smartly leans on her excellent lighting (Jennifer Lennon) and sound (Steven Lafond) designers who use the scene transitions to flesh out the world of the play and make room in the short runtime for the beautiful silence and space in the actors’ performances. Ferencz and Schutt’s performances are two of the most compelling at this year’s Fringe, balanced, true and complicated as they negotiate being both neither fully right nor wrong. Schutt is particularly noteworthy as the left-behind Ruth, facing the loss of her beloved friend with over-compensating organization, self-sacrificing devotion and crumbling emotion she muscles back with everything she has in her. A Good Death is the unexpected gem of my Fringe experience thus far; an unforgettable personal story packed with universal emotion.

SExT (A-)
I contemplated giving this show an asterisk instead of a grade because it doesn’t feel quite right comparing a student-created, student-aimed sex ed play to a professional production but I really wanted to give it an A, so I did (the minus is how I’m reconciling the fact that this obviously isn’t up to the performance standards of the rest of the Fringe; man, those boys cannot dance). Devised student theatre with an important message can slip into SNL high school theatre sketch territory pretty fast and but SExT (Sex Education By Theatre) avoids that pitfall with self-aware humour and non-judgemental earnestness. The musical numbers are winking and the dramatic scenes delivered with no-frills sincerity. Breakout star Mary Getachew is one of very few people on stage who seems at all likely to find a life on the stage but that’s not really the point here. Unlike, say, A Glass Hive which features a cast of theatre students, these students aren’t trying to make a name for themselves, they just want to feel involved, included, accepted and heard. And they want to make sure you know how to properly put on a condom. I can’t imagine a worthier mission.

Behold, the Barfly (B+)
Spoon vs. Hammer’s Monarch Tavern-set sketch show, written by Justin Haigh and performed by a cast of eight, is a wacky good time with high highs that easily outweigh the moderate lows. The nature of the humour is varied which makes the show a somewhat uneven experience but also ensures at least a laugh or two from everyone, no matter their preferred style. Personally, it was Steve Hobbs’ maniacal clown standup routine that slayed me most, with Jeff Hanson’s absurd wide-grin delivery of ‘Scary’ Belafonte’s “Day O” (voiced by Arthur Wright) a close second… though I couldn’t possibly explain to you why I found the latter so side-splittingly funny. It’s up and down and all over the place with a very weak frame that could just as well be dispensed with (the excellent recurring “Things that Make No Fucking Sense” bit is all the continuity the show needs) but the sum of Behold, the Barfly‘s disparate parts is still pretty high.

Romeo & Juliet Chainsaw Massacre (B+)
One of the Fringe’s biggest all-star casts assembles for a fun Pride & Prejudice & Zombies-like mashup of Shakespeare and genre film that replaces the horrors of the famous tragedy with the more obvious horror of a plain old chainsaw-wielding psychopath (whose true identity is woefully easy to figure out). The show is a hoot and a half and the cast appears to be having the most fun anyone’s ever had. Shakespeare pros Scotts Emerson Moyle & Garland are boisterous and delightful as Lord Capulet and Paris while Nicholas Porteous and Brittany Kay strike a good balance of silly comedy and actual romance as the titular lovers. Most of the establishing plot remains shockingly in tact with only the final two acts cut to pieces to accommodate the horror-comedy conceit. There’s not really much to the adaptation but there isn’t supposed to be- just absurd laughs.

In(decision) (B)
This perfectly sweet little solo show (dramatically ill-placed in the overwhelming Randolph space) takes us inside the mind of Tamlynn Bryson for an hour as she weighs whether to accept her boyfriend’s marriage proposal. As the chalk dust from her ever-evolving pro/con list flies, Bryson treats the audience (who is made to participate) like Amy Poehler from Inside Out– a voice in her head she expects to steer her in the right direction. Ultimately it all comes down to what we knew from the beginning it would always come down to- does she love the guy? The definitive answer and how easily she reaches it makes the somewhat draggy show feel like filler but Bryson’s charm easily pulls us through.

That’s How I Remember It (D)
The trouble with reviewing improv is that it’s completely possible that this show was fantastic on any other night. The night I saw it, it was a trainwreck. So, grain of salt; it’s possible you’ll like That’s How I Remember It even though I didn’t. Four improvisers in snazzy suits (John Richardson, Michael Mongiardi, Raul Delgado and Sharjil Rasool) and one guest stand behind microphones radio play-style. They take a movie suggestion from the audience- ours was Toy Story 2– and, theoretically, recreate the plot to the best of their memory. Assuming they don’t have encyclopedic memories of every movie ever made, the time while the audience is watching a reel of “coming attractions” (aka filmed sketches) could be used to Wikipedia the plot so the show will at least have something to do with the movie. Or movies in general. Alas, no matter how many times Rasool tried to enter a scene as Woody (he never succeeded), the action of this “Toy Story 2″ was just unrelated nonsense. It was totally free, long-form, non-physical improv with zero investment in the show’s advertised premise. Which would have been fine, I guess, if it had been funny.