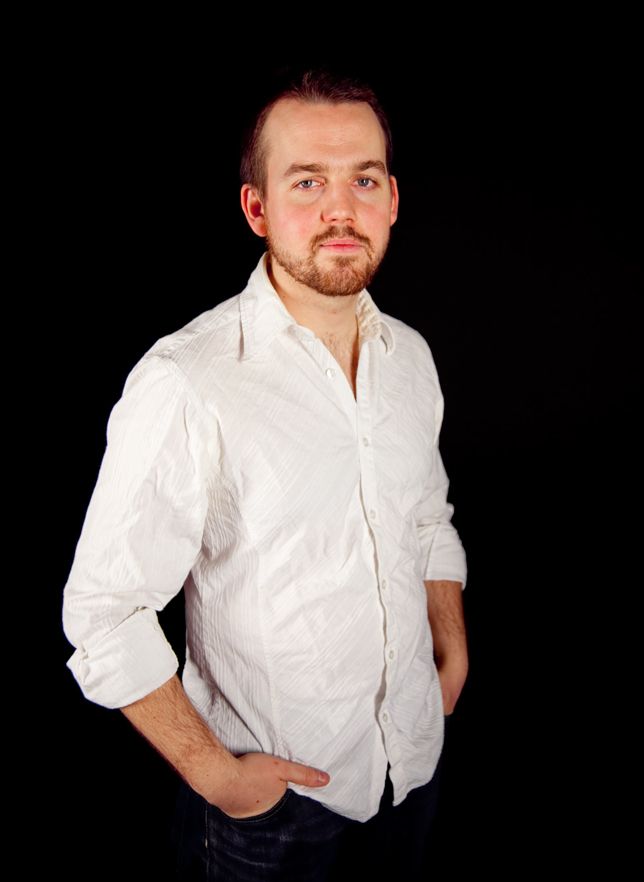 Read on for Scott’s full interview

My very first experience was a touring show that visited my school in junior kindergarten. I don’t remember what it was called or exactly what the deal was, but I recall four actors playing the four classical elements in a play about playing nice with others. Those four actors got a few hundred children up and running around as their minions, and somehow we all settled down to watch the rest of the show.

Fascination with Shakespeare’s plays, specifically the incredible depth of stuff that can be mined from those texts. I wanted to explore that.

Peter Donaldson, may he rest in peace, as George in Who’s Afraid of Virginia Woolf? in 2001. By intermission, he had convinced me that I couldn’t not go into professional theatre. I also really love Graham McLaren, for his clarity about intention in Shakespeare, and David Antscherl, who taught me a lot about how Shakespeare’s text works for the actor.

I would love to approach Julius Caesar at Toronto’s Old City Hall, using the inside up to assassination, the front steps for the eulogies, and then staging the civil war in the interior parking lot with a huge cast and tons of military hardware. I think it would be a great way to tell that story, and there are some great thematic ties with the history of that building.

Yes and yes. I enjoyed- and learned a lot from- Anthony Cimolino’s production of Bartholomew Fair at Stratford in 2009. And to come back to Graham McLaren, Necessary Angel’s Hamlet was brilliant work; an intention-driven approach to that play was riveting even in the moments that didn’t quite click.

How did Urban Bard get started?

I found a location that was a good fit for a play: College Park’s courtyard, for Twelfth Night. I knew very quickly how we could use that space to tell that story well. It was meant to be a one-off project, but the audience response was really overwhelming, so we kept looking for ways to implement our mandate.

You use unique spaces around Toronto to stage your productions. Are you inspired by the space or do you go scouting after you pick a play?

I mostly let the space suggest the text, though that isn’t always the case. I’m still after a really great place to do Hamlet.

Why The Two Noble Kinsmen?

A whole pile of reasons: it’s almost never produced, we had the right space for it, it was a good contrast to Twelfth Night (with which it ran in repertory)… it has also been a play I’ve sought to direct since seeing the Stratford Festival’s production about ten years ago- their only time producing The Two Noble Kinsmen, and one of the best things I’ve seen there.

What are some of the challenges of such a rarely-produced piece in such an unconventional space?

Actually, I really felt liberated by the audience’s lack of familiarity with the text. Because of the play’s origin as a work of apprenticeship- Shakespeare wrote the beginning and end, and John Fletcher wrote the middle- the opening sets up a bunch of story elements that are never addressed again. Starting our production at almost the end of Act One helped a lot with telling a clear story, and I doubt you’d get away with that edit in a more familiar play. The nature of the space was occasionally a challenge (disruptions ranging from children on tricycles to drunken poker games in the middle of our ancient Greece), but I really loved what the space let us do: Palamon and Arcite’s jail played very clearly and viscerally, the Jailer’s Daughter’s various hiding spots provoked terrific reactions from the crowd, and so on. Our site-specific mandate is often a huge help to me as a director, in that I can use the location to tell the story more clearly.

I cast most of the men quite easily- the easiest choices were Rob Westgate as the Jailer and Kevin Robinson as the Wooer, I think. Much of the casting, including those two, was about casting actors in roles that contrasted with their parts in Twelfth Night, so having our Malvolio play Palamon was an easy choice. The women were more challenging, as I had my hands full of great options, so I had the four actors read various roles until we found the right fit. The last piece of the puzzle was Christine Shaheen, who stepped in to play trumpet at the last minute- she was handling our publicity and social media, and then saved the day at the eleventh hour.

We rehearsed The Two Noble Kinsmen for four weeks, while also bringing the remounted Twelfth Night up to speed. We rehearsed almost exclusively onsite (much to the confusion of many a College Park shopper). We also spent a lot of time on the text before we staged scenes, which I think paid off immensely- our staging had to be adaptable because of the venue, but a solid grounding in the text ensured that the actors could deal with any weirdness that arose. Generally, I tried to direct with as light a hand as possible, because theatre isn’t worth watching if the actors don’t feel ownership of their parts.

What are some of the other things you brought to the play that were unique to your production?

I think the way we staged the 3 prayers was unique- three actors as statues of Mars, Venus, and Diana, briefly coming to life to show their blessings. We also made the choice to stage Palamon and Arcite’s final duel, which is written to take place offstage while Emilia monologues- in a site-specific production, it made a lot more sense to just let the audience see the action.

Urban Bard’s 2011 season, which we’ll be announcing as soon as we have our funding confirmed. The plan is to branch out into new spaces, new genres, and to bring more directors on board.

If you could pick one definitive moment in theatre up to this point (as an actor or director), what would it be?

In The Two Noble Kinsmen, I really enjoyed watching the audience in the moments leading up to Palamon’s forestalled execution. I’d see people getting visibly nervous as the executioner sharpened his blade, and there would be gasps and tears as he lifted his sword for the kill. I felt like the cast had really come together to draw the audience into the story, and it confirmed to me that our site-specific mandate can make a real difference.

Only that Urban Bard has big things planned for the near future, and our Facebook group is the best way to keep on top of new developments. You can find that through our website at www.urbanbard.ca .