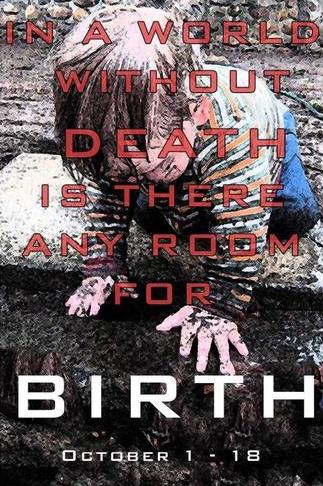 On Stage in TO: Fall Drama

Enemy of the People: an open forum
Florian Borchmeyer’s modern adaptation of the Ibsen play An Enemy of the People (translated by Maria Milisavljevic) attempts to instill the 1882 play with new immediacy and contemporary commentary. We’re destroying the earth! Bureaucracy will kill us all! Everyone is corrupt! Resistance is futile! It all works fairly well, thematically, because Borchmeyer’s principal concerns are pretty much exactly Ibsen’s concerns (though perhaps not his principal ones since the environmental angle was a bit more metaphorical the first time around). The characters, however, don’t translate quite as fluidly as the themes. Joe Cobden’s restless, determined Dr. Stockmann remains a worthy protagonist with a tragically familiar uphill battle and Tamara Podemski is captivating as his stalwart wife who isn’t given quite enough lines to fully articulate her expanded arc when placed in a contemporary context as a young mother and teacher with more on the line than her 19th century predecessor. Rick Roberts has an amusing Romney-ish quality as town mayor Peter; the various bureaucrats, business folk and morally flexible journalists who populate the rest of the world, however, are nearly impossible to distinguish from one another- and why are they all in a band together? I appreciate a clever use of David Bowie’s ultra-catchy “Changes” as much as the next person but the production appears to be trying too hard to be cool when serious conversations are punctuated by a group jam session. The adaptation is at its very best in the town hall scene when everything confusingly breaks down and the characters end up in a debate with engaged audience members. It’s immersive audience participation at its (optional!) best as the cast reveals the depth to which they understand their characters and the issues at hand while pushing the moral debate onto the audience’s heads to show how grey it really is. Creatively, however, the greatest achievement lies with designer Michelle Tracey whose forced perspective chalkboard set is as intellectually engaging as it is visually appealing. Perhaps tellingly, it’s the moment when the characters frantically whitewash Tracey’s work that is the most poignant in a piece striving to be Very Very Important.

Dystopian Birth at Campbell House
Tom Arthur Davis’ three-part epic currently playing at Campbell House needs expansion. The two theatrical instalments (and, to a lesser extent, their internet-dwelling epilogue starring the incomparable Astrid Van Wieren) are complex, engaging vignettes so rich in detail that it’s impossible to fully grasp all the world-building facts being thrown at you. Positing a theory about a future where humans can live forever, Davis has created a setting so full of moral quandary and technical specifics that you get the sense he could tell another ten interconnected stories before exhausting his well of dystopian revelation. The vignettes on offer having left me with more questions than answers, I wish he would write those other ten installments. Setting aside the strange opening monologue and Part III (the online video is far shorter and simpler than the other instalments, a smart choice since its “and now you have homework” gimmick will likely lead to it being skipped by a large portion of the audience), each existing segment of Birth features two simultaneous scenes, demarcated by Cameron Davis’ impressively atmospheric lighting design (in an admittedly not-light-friendly space, the use of which is convenient but somewhat baffling). Part I is two forms of interrogation- Greg (the captivating Jesse Nerenberg) defending himself to his wife Louise (the pristine Tennille Read) while his mistress (Pamela Sinha) is officially questioned by a government official about her crime of child rearing. The husband/wife scene easily overshadows its counterpart, beginning tentative and stiff until the tension is broken by the crowning achievement of Davis’ script- an uncomfortable, strange and beautiful speech wherein Greg explains the allure of an older, imperfect woman to his sculpted and smooth wife (hint: texture). Nerenberg delivers his best dramatic performance in years as Greg struggles to explain what Louise can’t possibly understand, received with perfect restraint by the eerily calm and insanely beautiful Read. Part II is more consistently solid, featuring the playwright and the great Eve Wylden as conflicted kidnappers juxtaposed against Marcel Dragonieri as the powerful father of the kidnapped child and Justin Miller as the calculating man tasked with calming his bereavement. Here the two scenes play off and into each other perfectly with detailed, stirring work across the board from all four actors. Wylden is particularly moving as a frantic mother intent on dehumanizing the child she’s kidnapped in the hope that she might save her own. Davis plays her partner Andrew with wonderful nuance, carefully picking at the scabs of a backstory that reveals perhaps the most complex psychological contemplations in his dystopian universe. The key choice to focus on characters and relationships is what gives what currently exists of Birth its emotional heft, but it does so at the expense of clarity when Davis’ new world just begs to be explored more fully. There is clearly much more to this story; let’s hope Davis isn’t finished writing it down.

Through Students’ Eyes: To Kill a Mockingbird
Reviewing a show at Young People’s Theatre, you’re given the option of at 1pm or 7pm performance. I chose the 1pm partly because my evening theatre spot was already filled but mostly because YPT is nothing without the YP. At the student matinee, young people flooded in the doors in full unwieldy fieldtrip mode and reluctantly settled into their seats. Many forgot to turn off their cellphones (or thought they could get away with keeping them on vibrate); most got a little restless about 2/3 of the way through the 90 minute show and started whispering to their neighbours; almost all of them laughed too loudly at the silly ham costume that undercuts the climactic action scene (and its painfully slow fight choreography). But they also came armed with a month of studying Harper Lee’s classic book, discussing the major themes and learning about the historical context- that’s a lot more than your average adult audience brings with them to the theatre (I sent one highly educated adult I know to a Shakespeare play in August and the best insight he could come up with was “I liked the Duke’s suit”). The largely uncorrupted moral code of a young audience brought out the best in Christopher Sergel’s adaptation- they gasped at the unfathomable guilty verdict and sighed when Scout showed Boo kindness- while I’m not sure the production is complex or sophisticated enough to pass adult scrutiny. Director Allen MacInnis plays it extremely safe and straightforward, relying too much on Caroline Toal’s cartoonish narrator who doesn’t quite capture Scout’s infectious brightness. Tal Shulman and Noah Spitzer are excellent as Dill and Jem respectively and Matthew G. Brown’s Tom is memorable for his heartbreaking gentleness but few others in the cast particularly stand out. In a vacuum, YPT’s production of To Kill a Mockingbird is somewhat forgettable, but theatre for young audiences doesn’t take place in a vacuum, or even your average theatre space where cynically high standards and pure judgment of merit reign; YPT plays for Young Audiences and to take the gasps and sighs of a fully invested crowd of late-millennial teens out of this To Kill a Mockingbird would be to undersell its value.

Soulpepper’s Musical Men & The Legacy of Glenn
There are two major versions of Soulpepper’s tribute to the man and myth that was legendary pianist Glenn Gould. The first version is the one experienced by an older generation of CBC-listening Canadians, the folks who remember Gould, his particular brilliance and his particular eccentricities. Then there’s the version I saw, where four performers (Brent Carver, Mike Ross, Steven Sutcliffe and Jeff Lillico) whose particular brilliance and particular eccentricities I know very well paid tribute to a man I know mostly by name and for his likeness that sits outside the CBC building enduring pigeon poop and tourist photos. I’m not sure, had I known more about Glenn Gould, if I would have felt that playwright David Young’s piece delved insightfully enough into the enigmatic life of one of our most famous Canadians, but I found the strange juxtaposition of my familiarity with the performers over their subject somehow enlightening (and I enjoyed the fun blocking around the issue of that famous sculpture outside the CBC). At his most juvenile, Glenn “the prodigy” is played by Lillico, one of the country’s most versatile young actors whose startling range can play from 6 to 60. Then he becomes Mike Ross “the performer” for the most intriguing scenes of the play. Glenn tells us that Gould was inventive, skillful and vibrant at the piano, traits that suggest that perhaps Mike Ross (when granted the privilege of his piano, which he’s missing here) might be one of modern Toronto’s closest links to Gould’s legacy. Then he’s “the perfectionist” in the form of Shaw/Stratford character actor Steven Sutcliffe, one of the most detailed performers of his time, before morphing finally into an entirely different kind of Canadian musical legend, Brent Carver. “The Puritan” is the most muddled of Gould incarnations and Carver’s warm persona least lends itself to the imitation but his Beloved Canadian status, gorgeous musicianship and careful intellectualism hint at a final commentary on Gould’s importance. I never knew much about Glenn Gould but I understand him now to be a man so complex and talented that it took no less than three geniuses and a legend to capture him onstage. Is Glenn itself a game-changing piece of theatre? Absolutely not; it’s too broad, too superficial, too incomplete. But the casting fills in every space left by the script to create one person out of four.