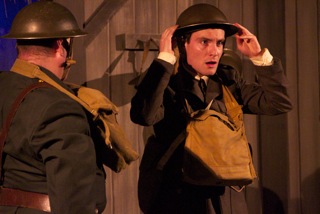 Jesse Nerenberg was the first independent artist to ever win a My Theatre Award for Best Actor (he took home the inaugural prize for his 2010 performance as Alan Strang in Equus). Since then, we’ve reviewed him in six different productions and found the quality of his work to be consistently some of the best in the city.

In 2013, Jesse returned to the familiar theme of world war to play Raleigh in The Empty Room’s production of Journey’s End, earning him another My Theatre Award nomination, this time for Best Supporting Actor in a Regional Production.

Read his interview from the 2010 Nominee Interview Series then read on for the latest from Jesse.

You last participated in the Nominee Interview Series for the 2010 My Theatre Awards. What have been some of the highlights of your career since we last talked to you?
Since I did Equus just over three years ago I’ve done plays here and there of many different types, from completely new works to Shakespeare to a school tour of a TYA show. Some of the highlights would probably be the production of Mary’s Wedding I did in summer 2011, and the one-man show The SantaLand Diaries that I mounted at the very end of 2012. I’ve also gotten to do some work in television and radio, which is always great.

In your last interview, you mentioned how much it meant to you to be in Storming Juno. Now you’ve added a World War I story to your resume as well. What is it about war stories that interests you?
Journey’s End is actually the second play I’ve done about the First World War, since Mary’s Wedding is about it as well. I think the reason I’ve been able to be in quite a few projects about the World Wars is both a combination of there being a lot of roles for me (mostly because most of them are about white men in their early twenties) and the fact that I do adamantly feel that we should be telling stories about those very difficult periods of history. What I really like about Journey’s End, is that it’s a play that really doesn’t glorify war at all. The war, as portrayed in the play, is tedious, unforgiving and inevitable. But all the battle and raid scenes happen offstage, so it’s not about a bunch of men running through the muck being heroes; it’s about the effects that the war is having on a group of men, both young and old, and the different ways that each one copes with having to grapple with one’s humanity in a totally inhuman situation.

How did you get involved with Journey’s End?
I was approached by a couple of the producers, most specifically Edward Hillier, who asked if I wanted to come on board as an actor/producer.

What’s the process you go through in preparing for a part, from script to stage?
Honestly, the details of actor preparation (at least the way I go about it) are a lot less interesting than I think many people realize. My process involves a lot of reading of the script, a lot of a repetition and a lot of what I’ll choose to call daydreaming about the character. If there’s an accent, I’ll work on the accent by listening to recordings of people speaking; if the play is set in a very specific historical time period I’ll learn about that time period. Nothing I do is magic and nothing that I do is a trick. Like I said, it’s a lot less interesting to hear about than I think many people realize. It’s just the necessary work that has to happen.

Your character Raleigh goes through a big arc from naïve enthusiasm to tortured survivor of a dangerous raid to his ultimate demise in the trenches. What were some of the key elements of the character that you used to ground him through such big changes?
I’m not sure I would describe Raleigh as being grounded throughout those big changes. I think that he is a young man who throws himself into a situation when he has totally underestimated the consequences. I think his situation is throwing him off centre and confusing him. Though I do think that the most important element of Raleigh is his love for Captain Stanhope. If Raleigh doesn’t absolutely adore his boyhood idol, then the play simply doesn’t work.

You’re a very detailed performer, giving your character a very specific posture, vocal ticks, background business, etc. Are those the sort of things you put on at the end to top off a performance or are they built in from the beginning of the process?
I’m always trying to build as I go. The rehearsal process is, I think, a learning process. If you aren’t learning, I don’t think you’re really rehearsing. In terms of posture, that was something we looked at rather specifically, because as a soldier, there is a certain way you are trained to stand, even if you aren’t standing at attention.

Did you have a favourite moment in the production?
In the script, after Raleigh has been badly wounded, he asks Stanhope to get a candle for him because he says that it’s so horribly dark and cold. Stanhope goes into the back dugout to get a candle and a blanket and it’s while he’s gone that Raleigh finally dies. In one of the early performances, right before that moment I had a sudden thought hit me as I lay on the bed with Andrew Petker (who played Stanhope) holding my hand. I realized that I was about to die, but that I didn’t want him to have to see me die. So when I asked for the candle and I watched him walk off into the back room, I knew I would be dead by the time he got back, and I silently apologized to him for letting him down and not being able to pull through. There is no way that Andrew knew any of this was going on, and I don’t imagine that the audience knew either, but the idea that I was sparing him having to watch me slip away really brought that final moment alive for me as an actor. This is the kind of thing I actually wouldn’t usually reveal, because it’s totally private work, and I didn’t tell Andrew about it at the time.

What’s coming up next for you/what are you working on now?
Currently, I’m actually in Banff, Alberta taking part in the Citadel/Banff Centre Professional Theatre Program. If you haven’t heard of it you can read more about it HERE or check out our daily blog posts HERE (there are also video blogs elsewhere on the same site).

After four weeks of training in Banff we all go to Edmonton, where I’ll be playing Benvolio in Romeo and Juliet at the Citadel Theatre.

Is there anything you’d like to add?
Thanks so much for the nomination! I really appreciate it.