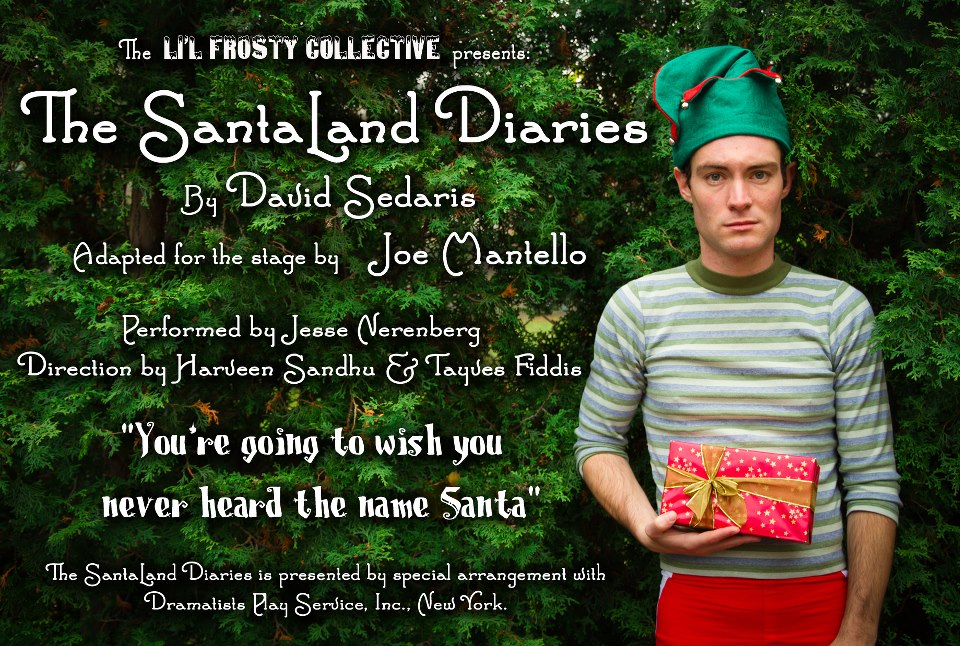 We Recommend: The SantaLand Diaries

The stage adaptation of David Sedaris’ first person account of elf life at Macy’s is as smartly sarcastic and belly-shakingly funny as you’d expect from the famous essayist, but what struck me most is how not-so-dark the heart of his dark comedy is. I would even go all the way to sweet. Insofar as a story about a disgruntled 28-year-old whose chronic unemployment forces him to don green velour pants and the nickname “Crumpet” can be sweet, The SantaLand Diaries is sweet. Sure there are stories about checked-out Santas, lecherous elves, and mothers who hit their kids, and Sedaris drops in a fun recounting or two of how he purposely screwed things up (lying to patrons, setting a mob on Phil Collins, wishing death on a woman who threatened to have him fired), but he ends it all by telling how one particular Santa really got at the meaning of Christmas, making kids smile, parents cry, and David seem like a good person by association. Sedaris knows just when to undercut the sentimentality but, far more surprisingly, doesn’t let the cynicism of his dry and often dark observations in the consumerism capitol of the world take over. It’s that balance that makes The SantaLand Diaries the perfect kickoff to Christmas.

This particular production is ramshackle enough to highlight Sedaris’ not-so-glamorous tone. Kensington Market’s Videofag performance space is small and smelly but The Li’l Frosty Collective is adorable, offering cupcakes, hot chocolate and eggnog in exchange for a tiny donation, hosting Pay-What-You-Can matinees, and stationing cheery and charming personnel (including directors Tayves Fiddis and Harveen Sandhu) at the front of house to welcome guests and warn clueless parents about the adult content. The actual piece isn’t direction-heavy and I’m glad to see that Fiddis and Sandhu recognized that that should be the case. They’ve carved out some nice moments and added some unnecessary but amusing music (the use of “Little Drummer Boy” works particularly well), but the piece mostly rests on the shoulders of its sole performer, Jesse Nerenberg. Playing Sedaris as a detailed character rather than doing an impression of the man himself, Nerenberg brings his usual laser focus to the nuances that most actors would have overlooked in a piece this funny. His renditions of other characters in the story are varied and fun (pulling out a dozen funny voices, an impressive Scottish brogue, and both his real/pretty good singing voice and a go-for-broke Billie Holiday impression) and he strikes a great balance between humour (of the absurdist, deadpan and even occasionally physical varieties) and schadenfreude misery.

It’s 12 bucks (at the door, or PWYC matinees), it’s in the middle of town (187 Augusta Ave.) and it’s only an hour long- you have no reason Not to go see The SantaLand Diaries before it closes on Tuesday. Just go, Crumpet will teach you all about the meaning of the season.